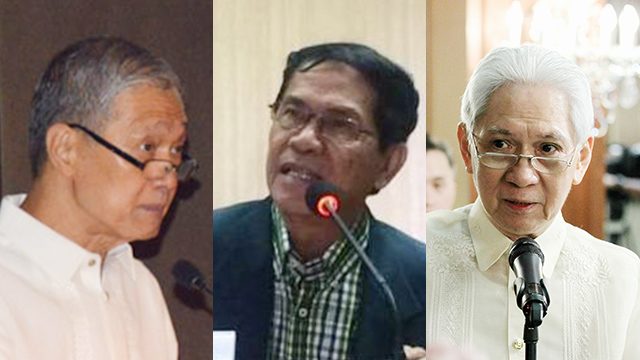 Facebook Twitter Copy URL
Copied
All of them vow to solve the problem of inordinate delay, which has resulted in many losses of Ombudsman cases

All three of them vowed to solve the problem of inordinate delay, which has resulted in many losses of Ombudsman cases. Other applicants also said they would address this problem to promote a faster justice system.

The Sandiganbayan justices are considered a cut above the rest in this aspect because they had sat on the benches that ruled on Ombudsman cases. They know the standards that the Sandiganbayan applies in granting or denying cases.

For his part, Sandoval said that in his 11 months as Special Prosecutor, he has heard of an alleged anomaly inside the Office of the Ombudsman where investigators are bribed to sit on cases so that there would be delay, and the cases will be dismissed by the Court.

These are so-called “parking fees,” which was also attested to by veteran defense lawyer Edna Batacan, who was also among the applicants for Ombudsman.

“We are investigating the matter very closely. It’s our suspicion, we have no evidence, but we wonder why before cases are resolved, it would take 2 years or 3 years for them to resolve a mere motion for reconsideration. To be a good Ombudsman, you must be suspicious,” Sandoval said.

Martires said he would create a special team of lawyers and Information Technology (I.T.) experts to digitize the process, and make prosecutors submit electronic monthly reports of their cases.

“You have to give these investigators a timeframe, let’s say 90 days, within which to dispose a case undergoing fact finding,”Martires said.

While Sandoval and Martires are now holding other capacities, Dela Cruz remains at the Sandiganbayan as the chairman of the First Division that is handling the pork barrel scam plunder cases of former senator Ramon “Bong” Revilla Jr.

Dela Cruz said that like Morales, he is willing to work early in the morning and leave the office late. Dela Cruz has been at the Sandiganbayan for 14 years. “Being Ombudsman would be a promotion,” he said.

Dela Cruz had earlier said he supports the Ombudsman’s bid in petitioning the Supreme Court to strike down the inordinate delay doctrine, believing in the logic that corruption takes time to investigate.

One of the applicants, private lawyer Rey Nathaniel Ifurung said that his young age is his advantage over the other applicants. ““I looked at the candidates but they look old. I don’t think they can do the rigors of the job,” said the 57-year-old Ifurung who has his own firm.

Sandoval, who is 77 years old, said age does not matter, giving as an example veteran litigator Estelito Mendoza who is in his late 80s but is still active and winning major cases.

(My experience could be an advantage for me. But you know among all the applicants, I’m the one who’s not a graduate of San Beda, I’m not from Davao, so I trust that I still have a fighting chance.)

Judge Carlos Espero II is from Davao City, but he was not interviewed as his interview for a Supreme Court justice would be considered.

“I never asked him. My application, I made it on my own,” Madrid said, and added he would “reshape” the approach of the Office of the Ombudsman and focus on civil cases forfeiting ill-gotten assets than filing criminal cases.

Rico is also from San Beda, where he was batch mates with former justice secretary Vitaliano Aguirre II. – Rappler.com