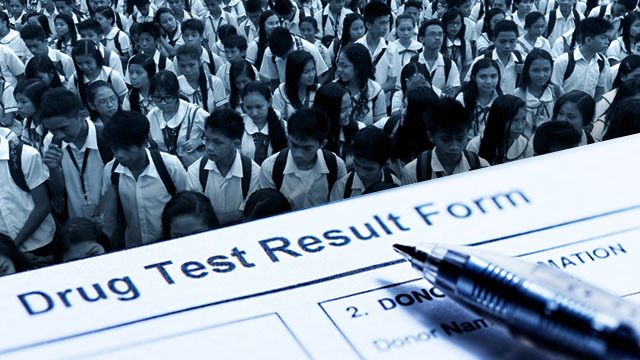 MANILA, Philippines – Human Rights Watch (HRW) on Saturday, June 23, slammed the proposal of a Philippine government agency to conduct drug tests on 10-year-old schoolchildren, calling it a “drastic extension” of the government’s anti-drug campaign that could place children “at grave risk.”

“It marks a drastic extension of mandatory drug testing already in place for all college students and applicants, and will effectively allow the police to extend their ‘anti-drug’ operations to primary school classrooms,” he added.

Philippine Drug Enforcement Agency (PDEA)  Director General Aaron Aquino is proposing the expansion of mandatory drug testing to include younger students, saying there have been instances when children as young as 10 were found to be drug users.

Kine said mandatory drug testing of elementary students can also deter students from attending school and rob them of an education.

“Depending on how such testing occurs, it could also constitute degrading treatment, and may deter children from attending school or college for reasons unrelated to any potential drug use, depriving them of their right to an education,” he said.

Kine added what the government should do instead is educate students about the potential risks of drug abuse.

The Teachers’ Dignity Coalition (TDC) expressed its strong opposition to the proposal.

“These kids are too young and it is not proper for us adults to assume that they are into drug use. At that stage of life, they are just started their social lives with their school activities and games. These are just mere babies,” TDC Chairperson Benjo Basas said in a statement on Friday, June 22.

The Department of Education opposed the proposal, noting that it violates Republic Act 9165 or the Comprehensive Dangerous Drugs Act of 2002 which authorizes drug testing only in secondary and tertiary schools. (READ: DepEd: Proposed drug test for 10-year-old students violates law)

DepEd added it has an ongoing drug testing program focused on preventive drug education, which has the full support of President Rodrigo Duterte.

Meanwhile, Senator Juan Edgardo Angara is pushing for a bill that seeks to create a nationwide education and awareness program on illegal drugs to be implemented by the DepEd.

Senate Bill 311 seeks to include the program either in the K-to-12 curriculum “or instituted as a regular and frequent co-curricular activity or event done in all public elementary and high schools in the country,” Angara’s office said in a statement on Saturday.

“The bill also mandates the establishment of a national helpline for drug abuse which would refer drug users to rehabilitation centers, or in emergency cases, provide immediate paramedic response,” it added. – Rappler.com