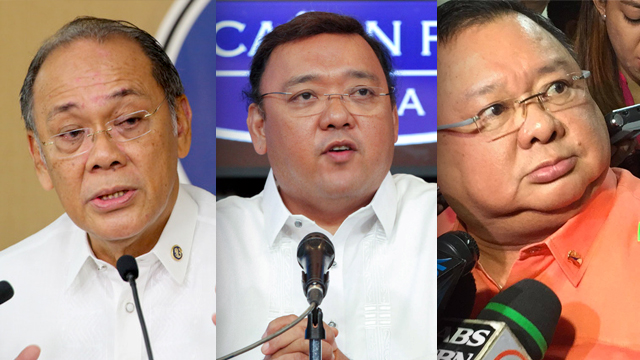 MANILA, Philippines – President Rodrigo Duterte has formed a 3-member committee to dialogue with the Catholic Church and other religious groups on his behalf, following his controversial remarks about Catholic Church leaders and God.

Presidential Spokesperson Harry Roque made the announcement in a press briefing in Davao City on Tuesday, June 26.

“He formed a 3-man committee to dialogue with the Church,” said Roque, adding that Duterte made the decision on Monday night, June 25.

“The theme will be how to lessen the rift between the government and Church,” he added in Filipino.

The members of the committee are Roque; Foreign Undersecretary Ernesto Abella, himself a former pastor for the Born Again Charismatics and former Duterte spokesman; and Pastor “Boy” Saycon, a political operator who Duterte appointed as a member of the EDSA People Power Commission.

Saycon has been tasked with reaching out to the Catholic Bishops’ Conference of the Philippines (CBCP).

Interestingly, the night when Duterte decided to form the committee was the same night he continued his rant against God, this time questioning the Last Supper. That night, he called his critics’ God “stupid.”

Present and former leaders of CBCP have been among the most vocal in criticizing Duterte for his remarks about God and the Church. (READ: Bishops hit Duterte for calling God ‘stupid’)

Roque said it is likely that these presidential remarks will be taken up during the dialogue.

“I would be lying if it has absolutely no relation. There is a relation and the President wants this [dialogue] because the Church and the government are in the same society,” he said in Filipino.

Roque then again sought to appease outrage over Duterte’s statements, saying the President is “only human.”

Yet the spokesman did not back down in defending the President’s supposed right to offend religions.

Asked whether Duterte is guilty of the crime of offending religious feelings, Roque said the concept of this crime was merely “inherited” by the Philippines from Spain and that it had been “superceded by freedom of expression.”

“Let us accept what the President said in the context of these freedoms,” said Roque.

He advised church leaders not to be “onion-skinned” because they too had “harsh” words for Duterte way back during the 2016 campaign which the President supposedly refrained from responding too.

“There were hurtful words directed at him by the Church which he did not respond to for two years,” said Roque.

However, even during the campaign period, Duterte had already ranted against the Church. It was during this time when he first publicly claimed he was sexually harassed by a priest, to prove his point that Church leaders also have wrongs to atone for.

Roque then told reporters that, in 2011, victims of sexual abuse filed a complaint of crimes against humanity against Pope Benedict XVI with the International Criminal Court. – Rappler.com