Jun 26, 2018 7:51 PM PHT
Rambo Talabong
Facebook Twitter Copy URL
Copied
The USS Ronald Reagan is in the Philippines for 4 days for its officers and crew to 'have some time off,' says their commander Rear Admiral Marc Dalton 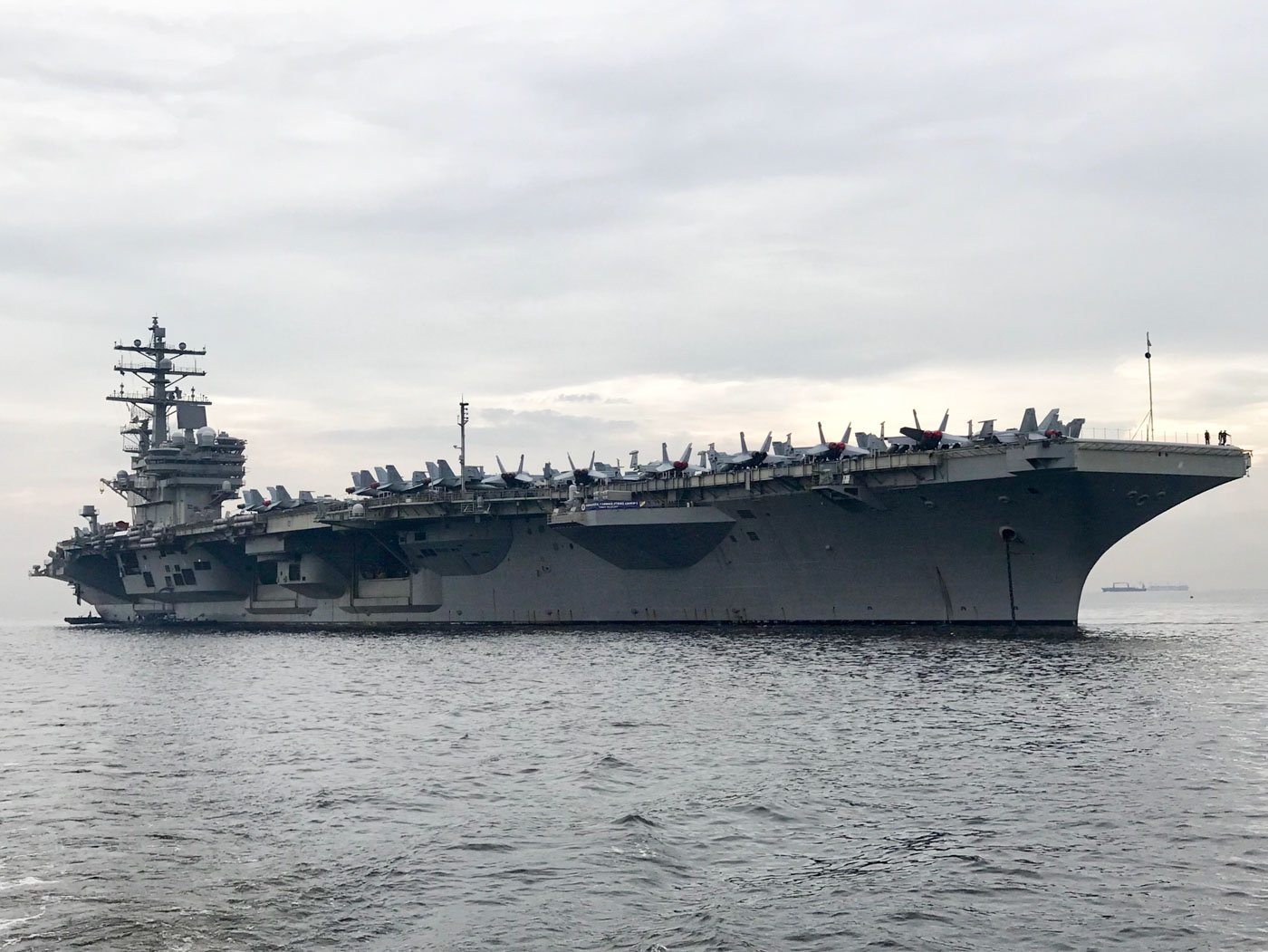 MANILA, Philippines – After patrolling unimpeded in the disputed South China Sea, nuclear-powered supercarrier USS Ronald Reagan docks for the first time in the waters of longtime US ally Philippines.

Local and international reporters were lifted aboard the Nimitz Class aircraft carrier from the coast of Manila Bay on Tuesday, June 26 for a briefing and a quick tour inside.

Massive is an understatement to describe the vessel. The ship carries 70 fighter jets and powered by 5,000 navy personnel from pilots to chefs. If twisted upright, it would stand 29 feet higher than the Eiffel Tower.

According to its commander, Rear Admiral Marc Dalton, the vessel sailed from the South China Sea  before docking in Manila as part of its annual routine patrol.

“This scheduled patrol is part of our routine training and operations that we routinely conduct throughout the region as we have for the last 70 years,” Dalton said, emphasizing their visit as promoting “freedom of the seas, unimpeded commerce to deter conflict and coercion.”

“The primary reason” why USS Reagan is in Manila, Dalton said, is to allow its sailors to experience “everything that Manila and the Philippines have to offer and have a chance to get to know some of the people.”

He said many of their sailors have “personal relationships” in the Philippines. Over a hundred of its crew are Filipino Americans.

What the Philippines gains

LOOK: US aircraft carrier USS Ronald Reagan is in Manila Bay for its sailors to "have some time off" after patrolling seas. It will stay in the Philippines for 4 days. @rapplerdotcom pic.twitter.com/Gp5nIXOB7e

The ship’s motto is “Peace through strength”, which Dalton believes speaks volumes about their mission in the region. (READ: U.S. flexes muscle in the Philippines amid concerns vs China)

“Continued and enduring presence in the region has created the security stability that allows unimpeded commerce and through freedom of the seas and the prosperity…We need to maintain that free commerce or maintain that prosperity,” Dalton said, after being asked to expound on their mantra.

The commander said they were able to patrol the disputed South China Sea given that “the US Navy operates everywhere that international law allows.”

In stark contrast to that is the story of Filipino fishermen.

Local fishermen in the Panatag Shoal have recently been harassed by Chinese Coast Guard officers, taking their best catch in exchange for cigarettes and bottles of water. Chinese fishermen, meanwhile, have reportedly damaged Philippine coral reefs.

The Philippine government has responded to the latest Panatag Shoal  incident by asking China to discipline its Coast Guard, but stopped short of filing charges against the Chinese fishermen, as it would supposedly reverse diplomatic gains from the Philippines’ pivot to China.

According to Dalton, he has not received a message from the Philippine Defense Secretary Delfin Lorenzana. The ship will stay in the Philippines for 4 days. – Rappler.com