Jul 2, 2018 5:10 PM PHT
Pia Ranada
Facebook Twitter Copy URL
Copied
In the Consultative Committee's draft federal constitution, there will be 18 regions to be led by a regional governor elected by their regional legislative assembly 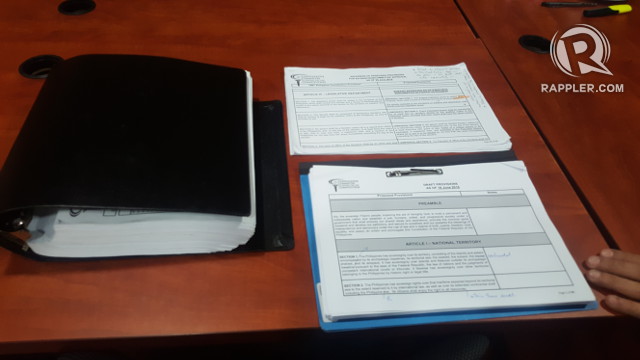 MANILA, Philippines – Days before submitting their draft constitution to President Rodrigo Duterte, the Consultative Committee (Con-Com) finalized its proposed delineation of exclusive powers of the federal government and the regions.

This distribution of powers is critical to the federal constitution as it shows clearly how powers that used to be with the national government will now be the sole purview of the 18 proposed federated regions.

The exclusive powers for the federal government and regional governments are listed below, based on a presentation made by Con-Com spokesman Ding Generoso on Monday, July 2.

Powers not listed above are considered “reserved” powers and will be given to the federal government, said Generoso.

This proposed distribution of powers aims to give regional governments more control over their economy and overall development, given the unique needs, resources, and culture of each region.

“We want regions to look into their strengths and weaknesses, look at the resources they have and plan their economic program,” said Generoso.

The Con-Com decided to retain, for the most part, today’s regional configuration when it came up with its number of proposed federated regions.

In total, there will be 18 federated regions to today’s 17. The addition is the proposed “Negrosanon federated region” composed of Negros Occidental, Negros Oriental, and the province of Siquijor. The Negros Island Region was dissolved by Duterte in August 2017, citing lack of funds.

Of the 18, 16 are “symmetrical” regions, meaning they will all have the same types of powers and structure.

But the Bangsamoro and Cordillera regions will be “asymmetrical” regions, or regions with more powers and a different structure owing to their “ethnic or identity-based demands,” said Generoso.

He could not yet provide the list of federated regions.

The proposed federal system means that the national government will no longer directly supervise all provinces, cities, and towns, as it does today.

The winning governor’s running mate will automatically be the regional deputy governor. – Rappler.com