Robredo asks Filipinos to unite vs killings, culture of violence 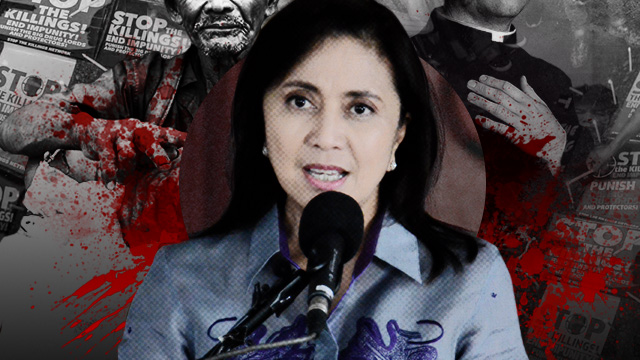 MANILA, Philippines – In the aftermath of the killing of 2 mayors in 2 days, Vice President Leni Robredo on Wednesday, July 4, urged Filipinos not to allow the situation to deteriorate by having a “united voice” against the “culture of violence.”

Robredo also called on authorities, especially the police, to put a stop to the recent spate of killings involving priests, tambays (loiterers), and government officials.

(I call on authorities, especially the police, to intensify investigations into these crimes and immediately work on ways to stop these seemingly consecutive killings.)

She said the public, through their words and deeds, must show the “true face” of the Filipino: mapagkalinga, hindi marahas; may pagpapahalaga sa buhay ng kapwa, at hindi sa pagkitil nito (caring, not violent; values the lives of others instead of killings.)

(Let us not allow the condition of our country to worsen. At this time, a united voice is our defense against the culture of violence and killing.)

She said she is one with every Filipino who wants a country free from violence, where justice is not elusive for victims of senseless deaths.

Aside from local government officials, at least 3 priests were also killed since December 2017: Father Marcelino Paez in Nueva Ecija, Father Mark Anthony Ventura  in Cagayan, and Father Richmond Nilo in another part of Nueva Ecija.

And in June, 25-year-old Genesis Argoncillo was killed while in detention after he was arrested during an anti-tambay drive of the Philipppine National Police. – Rappler.com