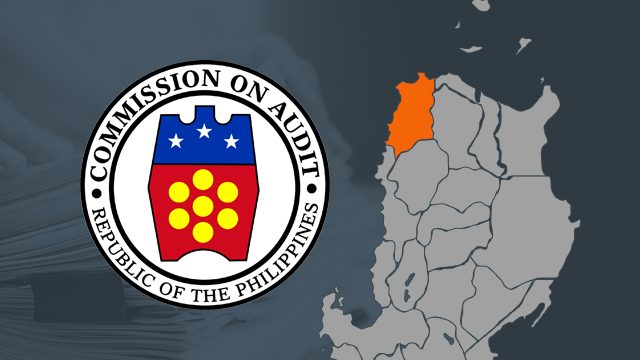 MANILA, Philippines (UPDATED) – State auditors found multiple irregularities in the transactions of Ilocos Norte provincial government, from P154 million worth of doubtful deliveries of goods to P21.76 million worth of purchases with fabricated documents.

These findings are contained in the Commission on Audit’s 2017 report of Ilocos Norte.

COA also found questionable practices such as purchases that specified brand names, which is not allowed under the procurement act, and the absence of a physical count when they did their inventory.

In its letter to Ilocos Norte Governor Imee Marcos, COA said: “We request that comments and observations contained in this report be fully addressed and we would appreciate being informed of the action taken in this regard within sixty (60) days from receipt hereof.”

COA said the payments “were not supported with corresponding distribution lists casting doubt as to completeness of deliveries made.”

“The absence of distribution list makes verification difficult, if not impossible,” COA said.

Auditors said these transactions violate Section 4 of the Presidential Decree (PD) 1445 and COA Circular 2012-001 which both require complete documentation in government transactions.

“Understandably, the absence of the distribution lists is an indication that the goods may not have been completely delivered and distributed to the beneficiaries,” said COA.

In its comment to COA, the Ilocos Norte government said it has submitted distribution lists related to P43.673 million worth of payments. “The audit team exhorts management to complete the soonest the list of distribution to complete the audit of said transactions,” the COA replied.

Government agencies are mandated to upload all its bid documents on online database Philippine Government Electronic Procurement System (PhilGEPS), but COA said that what Ilocos Norte uploaded there were printouts of other agencies.

Bulk of the transactions with fabricated documents were P18.8 million worth of drugs and medicines paid to CN Medical Distributor.

Fabricated Invitation To Bid (ITBs) “further imply that there were no actual invitations made to prospective bidders for the aforementioned procurements made by the province,” said COA. Auditors said these were violations of the procurement act.

The Ilocos Norte provincial government told COA “an investigation is in process on the alleged misrepresentation of documents and legal proceedings will be undertaken against concerned erring officials/employees.”

COA also found that P470,866 worth of electrical supplies, appliances and an iPad mini were bought by specifying brand names in the bid documents. Procurement law does not allow specification of brand names, since this will restrict the competition of other suppliers.

To defend it, the Ilocos Norte provincial government said they had used the brands for years because they are “reliable yet inexpensive.”

“It was mentioned that there were no brands names used in any other purchases, thus it was a matter of honest mistake and that no malice and utter bad faith was committed, and nothing but human error,” said Ilocos Norte.

COA also said that Ilocos Norte did not conduct a physical count for inventories worth P125 million, “which is not in accordance to Section 124 of the National Government Agencies, Volume 1 for Local Government Units.”

“Thus the existence, completeness and condition of the Inventories could not be ascertained,” COA said.

Marcos and Ilocos Norte were subjected to investigations by the House of Representatives on the alleged misuse of its tobacco funds, as well as vehicle purchases.

Majority Leader Rudy Farinas said on Wednesday that the House plenary has already approved and submitted to the Ombudsman a recommendation to file criminal and administrative charges over the vehicle purchases. – Rappler.com