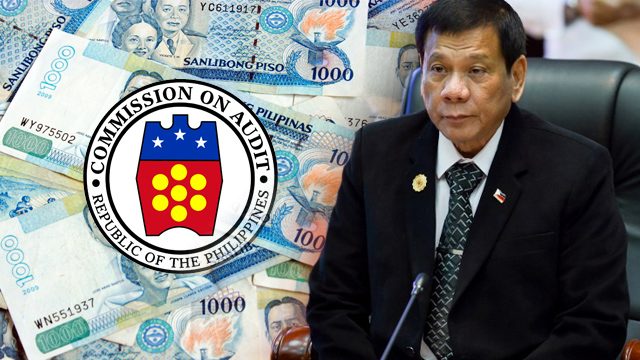 MANILA, Philippines (UPDATED) – In its maintenance and other operating expenses (MOOE) alone, the Office of the President (OP) in 2017 spent 534% more than it did in 2016.

Many of the increases were due to the Philippines’ hosting of the Association of Southeast Asian Nations (ASEAN) Summit last year.

Bulk of the professional fee or P3.09 billion was paid to ASEAN consultants.

The COA has also nudged the OP over P5.8 million unliquidated cash advances  incurred during the ASEAN Summit in 2017.

Another expense under “Other MOOE” which increased were the donations, which became P4.7 billion compared to P524 million in 2016.

The donations were sourced from the Presidential Social Fund, which President Rodrigo Duterte mainly spent for financial and other special assistance to uniformed personnel and their families.

In 2012, the OP donated 5 BELL choppers to the Philippine Air Force. Under the agreement, the Presidential Airlift Wing (PAW) division of the air force shall provide air transport to the president, his immediate family, and state guests.

In 2017, the Duterte administration spent P177.176 million for the maintenance of the PAW fleet. The amount makes up 94% of the total P188 million that the OP spent for repairs and maintenance of its transportation equipment.

State auditors flagged the OP because they later found that there were P51.5 million worth of the choppers’ spare parts and materials which are not yet installed or used.

The auditors also noted that the unused and uninstalled chopper parts were not included in the physical inventory of the OP as of December 31, 2017.

The COA recommended to the OP: “For monitoring purposes, install control over the use of inventory items  located at the PAW warehouse such as requiring a quarterly report on the utilized inventory items.”

This is a huge increase from his predecessors because former president Benigno Aquino III only had P2.98 billion in confidential and intel funds under the OP for his entire 6-year-term.

Duterte’s confidential and intel funds are unprecedented, way higher than any other Philippine presidents since 1989, as shown in this 2017 report by Rappler’s Research Team. In the said report, the budget department said the funds would be used “mainly for President Rodrigo R. Duterte’s war against drugs, criminality and corruption.”

Editor’s Note: In a previous version of this story, we indicated that P715 million in confidential and intel funds was spent in 2016. This has been corrected to P705 million.