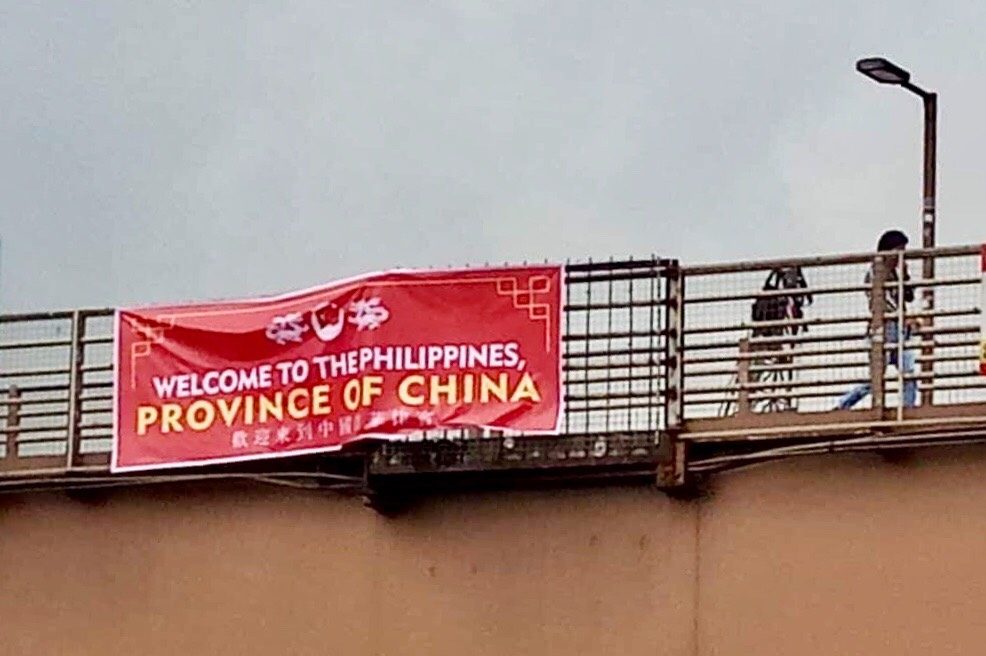 Facebook Twitter Copy URL
Copied
'They are propagating a lie that we have given up our territory. It's the farthest from the truth,' says Presidential Spokesperson Harry Roque

MANILA, Philippines – The now viral tarp that reads “Welcome to the Philippines, Province of China” is the work of the Duterte administration’s enemies, said Presidential Spokesperson Harry Roque on Thursday, July 12.

The tarp, seen on various footbridges in Metro Manila, was displayed in time for Thursday, the 2nd anniversary of the country’s legal victory over China’s claim to the West Philippine Sea.

“It’s absurd and I’m sure it’s the enemies of our government behind it. To them, try again. You need a better gimmick than that,” he said.

He said there was no truth to the declaration. However, it was President Rodrigo Duterte himself who once jokingly suggested that the Philippines be made a province of China.

“They are propagating a lie that we have given up our territory. It’s the farthest from the truth,” said Roque.

Asked who the “enemies” might be, Roque said he had no idea. But he said Malacañang won’t demand for the tarp to be taken down.

Duterte has often cited the right to free expression in defense of his own controversial remarks.

“We won’t do anything, but we know people who want to use it maybe to clean the floor or use it for the toilet,” said Roque.

He insisted that the Philippines continues to assert its sovereignty and rights over the West Philippine Sea while saying there is no need to enforce the Hague ruling as it is “binding” to all parties, including China.

China, however, has refused to acknowledge the ruling. The Philippines, under Duterte, has chosen to shelve the legal victory, citing the need to move forward in boosting economic ties with the Asian giant. – Rappler.com