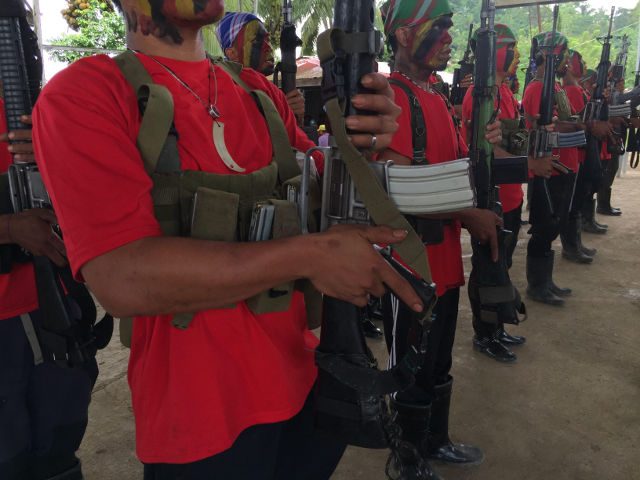 Facebook Twitter Copy URL
Copied
'Surely, this pretend "localized" peace talks will not involve even a single genuine revolutionary force. Duterte will certainly be negotiating only with its own shadow,' says the Communist Party of the Philippines

MANILA, Philippines – The Communist Party of the Philippines (CPP) on Friday, July 13, rejected the Duterte administration’s localized peace talks, saying it is “doomed to fail.”

The CPP rejected the plan two days after President Rodrigo Duterte, in consultation with security officials and lawmakers, approved the guidelines for localized peace talks with communist rebels.

“So-called localized peace talks are a sham, a waste of people’s money, and are doomed to fail. It is a worn-out psywar tactic to project victory to conceal the continuing failure of the AFP to suppress the people’s resistance and stem the steady growth of the NPA,” the CPP said.

“The civil war will continue to rage despite local peace talks,” it added.

It said the National Democratic Front (NDF), the CPP’s political wing, is the sole representative of communist rebels in peace negotiations with the government.

“Surely, this pretend ‘localized’ peace talks will not involve even a single genuine revolutionary force. Duterte will certainly be negotiating only with its own shadow,”  it added.

Duterte is set to release an executive order formalizing the guidelines for localized peace talks.

Malacañang said earlier this week that the elements for an “enabling environment” for localized peace talks include no coalition government or power sharing; no revolutionary taxation, extortion, arson and violent activities; and fighters are to remain in their pre-designated encampment areas.

The Duterte administration earlier suspended formal peace negotiations with the NDF for 3 months upon the request of the military. The NDF had agreed with the postponement of the resumption of formal talks, which was supposed to take place in July.  – Rappler.com