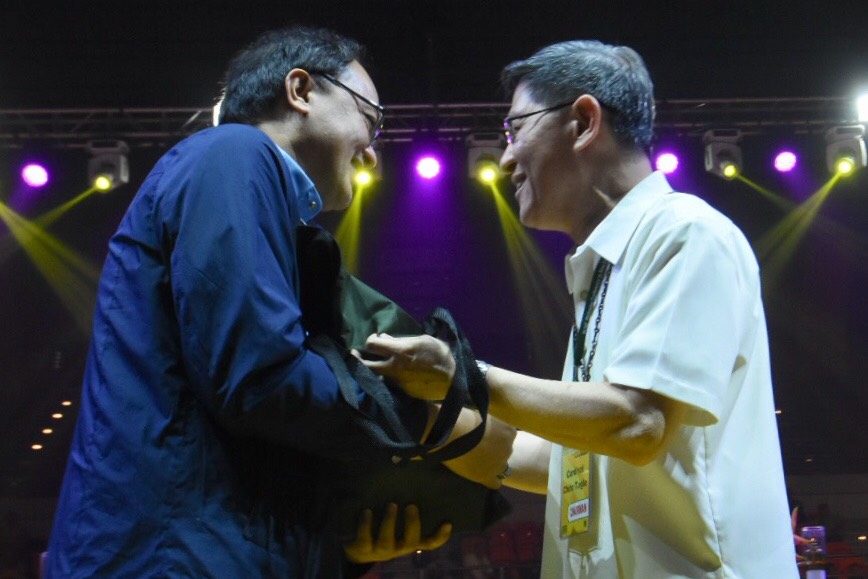 MANILA, Philippines – Less than 14 hours after Jennifer Taburada, 27, was slain by masked gunmen, priests and nuns pitched in to donate around P300,000 ($5,600) to the victim’s orphaned children.

The P300,000 was collected in a Mass on Thursday, July 19, for the second day of the 5th Philippine Conference on New Evangelization (PCNE) at the University of Santo Tomas (UST).

The Mass collections were made past 9 am on Thursday. Taburada was killed in Caloocan City at around 8 pm on Wednesday, July 18.

More than 2,000 priests and nuns, including foreign delegates, attended the PCNE on Thursday.

The breakdown of donations, as announced by the emcee at the event, is as follows:

In a press conference, Caloocan Bishop Pablo Virgilio David said he will entrust this money to the orphans’ parish, through parish priest Father Marcelo Andamon Jr. The parish, then, “can look after the needs of those children.”

Referring to these donations, David said, “They’re really focused just on those two children so that they can be symbols of our support.”

“It’s different when you give a face or a name. Jesus did not heal en masse. He didn’t heal crowds. He healed one person at a time,” David said.

The parish priest, Andamon, told David that the parish will take in the orphans for now, and give them material support.

David added that Hospicio de San Jose, a Catholic shelter managed by the Daughters of Charity of Saint Vincent de Paul, also offered to accept the orphans if needed.

The bishop said: “I was very happy that one of the sisters approached me, a sister who’s managing the Hospicio de San Jose, and they said, ‘We’re willing to take them if the social workers would not find relatives who will look after the children.'”

David earlier slammed the “death squads” behind the killings of Taburada and 36-year-old Alvin Teng in the same evening, and other murders in his diocese.

David said of the murderers, “What makes me really indignant is, they were taking their sweet time.”

David spoke alongside other panelists at the PCNE press conference on Thursday.

Jesuit priest Father Albert Alejo, who spoke at the press conference, said the public should not “reduce human beings to statistics.”

“The role of the Church now is to recover humanity from statistics. After the shock of numbers, we need to go back to giving faces and names and nicknames to numbers,” Alejo said.

“The task of the church, I think, is to recover the humanity behind the statistics, to remind people that this person is a tricycle driver who brings students to school. This same tricycle driver is a kuya (brother), is a father, is a son. Don’t just put a cardboard saying, ‘This is a drug addict’ and that dismisses the whole humanity of this person,” he added. – Rappler.com