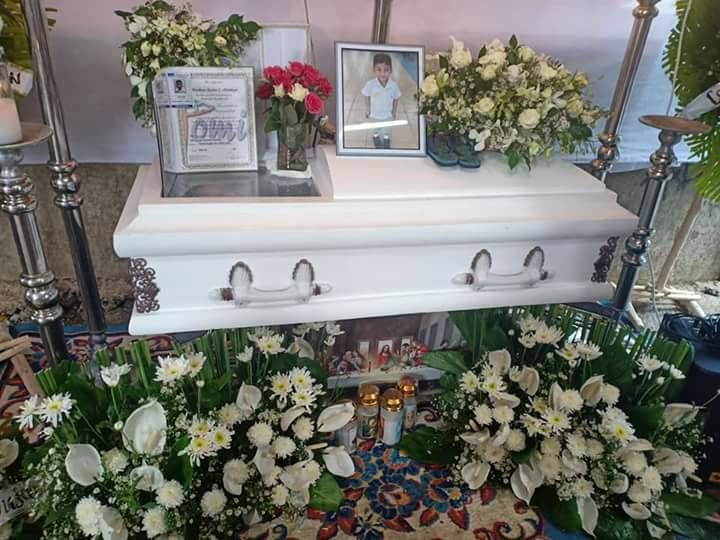 MANILA, Philippines – A crowd of relatives, friends, and sympathizers on Saturday, July 21, joined the funeral procession of Bladen Skyler Abatayo, the 4-year old boy hit by a stray bullet during a police operation in Cebu City.

The mourners, clad in black t-shirts  with the face of Skyler and the hashtag “Justice for Sky,” walked to Our Lady Of Mt Carmel Parish, Recoletos, Cebu City for the requiem mass, and then to Carreta Cemetery in Cebu.

Footage shot by the Cebu Daily News show a crowd of about a hundred, some carrying white balloons, at the cementery grounds. Mourners surrounding the small casket chanted for justice – “Hustisya! Hustisya! Hustisya!” – before Skyler was laid to rest nearly two weeks after he was killed.

On July 10, a Tuesday afternoon, Skyler had just finished his homework with his mother inside their home in Barangay Ermita, Cebu City.

According to Cebu City Station 5 Commander Senior Inspector John Escober, police received reports of drug suspects in a pot session and repacking shabu (methamphetamine) in a slum area in Sitio Bato, Barangay Ermita, prompting them to send a team. The Abatayos’ home was beside the shanty that housed the drug suspects.

What was supposed to be an inspection turned into a shootout. In the crossfire, one of the bullets punctured 4-year-old Skylar’s chest. He was declared dead on arrival at a nearby hospital.

The day after the incident, Cebu City Police Chief Superintendent Royina Garma told Rappler that none of her cops fired their guns. This, she confirmed after the cops tested negative for gun powder.

But forensic experts have long dismissed the credibility of paraffin tests. PNP’s Internal Affairs Service also said that the results of the tests do not mean the four unnamed cops are automatically cleared. They have since been relieved from their posts.

Meanwhile, the PNP continues their manhunt operations for the 4 alleged drug personalities who escaped after the shoutout.

Skyler was the only son of Gwynn and Marc Anthony Abatayo. – Rappler.com