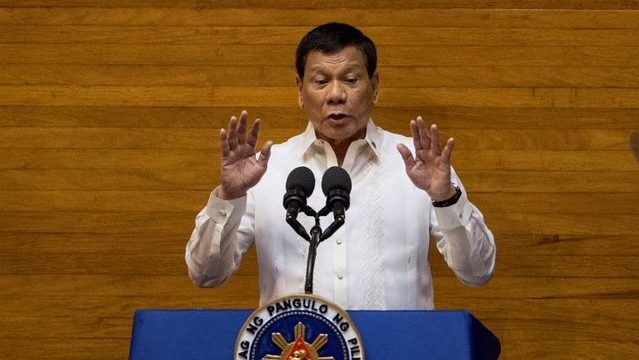 Facebook Twitter Copy URL
Copied
(UPDATED) If you think the government will sideline this campaign, you got it all wrong, says President Duterte in his State of the Nation Address

MANILA, Philippines (UPDATED) – The unrelenting campaign against illegal drugs is “far from over.”

Its master planner, President Rodrigo Duterte said so in his third State of the Nation Address (SONA) on Monday, July 23.

“The war against illegal drugs is far from over…The illegal drugs war will not be sidelined. Instead, it will be as relentless and chilling, if you will, as on the day it began,” Duterte said, tackling the drug issue head-on at the start of his SONA.

Duterte dismissed local and international criticism of his campaign.

“Your concern is human rights, mine is human lives. Lives of youths are being wasted and family lives are being destroyed,” Duterte said.

His statement came on the same day when pollster Pulse Asia reported that Filipinos see the accomplishments in the war on drugs as the most important achievement of his presidency.

Citing statistics of law enforcers, he said “billions-worth” of illegal drugs have been seized and he could not imagine them being passed around in the streets to fuel crime.

President Duterte slammed human rights advocates and critics for repeatedly calling for the campaign’s end, saying that he would not be “dissuaded.”

If they think he’d change his mind, Duterte said, “you got it all wrong.”

Duterte did not mention that over 4,500 Filipinos have been shot dead in anti-illegal drugs operations. At least 8 law enforcers have also been killed while pursuing drug suspects.  Human rights watchdogs, however, believe the death count is higher.

They claim that at least 20,000 have been killed in the name of Duterte’s landmark policy, including vigilante-style assassinations which happened almost nightly during the first months of Duterte’s presidency. – Rappler.com