MANILA, Philippines – It will be a Duterte-packed court by the time the President ends his term in 2022. Of the 15 sitting Supreme Court (SC) justices by then, a total of 13 would be his appointees.

By 2022, only two – Associate Justices Marvic Leonen and Benjamin Caguioa – would be non-Duterte appointees. The two were appointed by former president Benigno Aquino III.

But that’s barring resignation, impeachment, quo warranto ouster, or anything which could lead to Leonen’s or Caguioa’s removal. Ousted chief justice Maria Lourdes Sereno was supposed to end her term in 2030, but her removal via the unprecedented quo warranto opened up another vacancy for a Duterte appointee.

The quo warranto petition was filed by Solicitor General Jose Calida in March 2018 seeking to nullify Sereno’s appointment on the basis of her failure to file the required Statement of Assets, Liabilities, and Net Worth.

The number of Duterte appointees when his presidency ends in 2022 will remain at 13, no matter who is appointed chief justice.

If Duterte appoints Ang, who is from Davao, the scenario stays as is.

If Duterte appoints De Castro, Peralta, Bersamin, or Reyes, the number of appointees by 2022 will also stay the same because all of the 4 will retire within the President’s term. 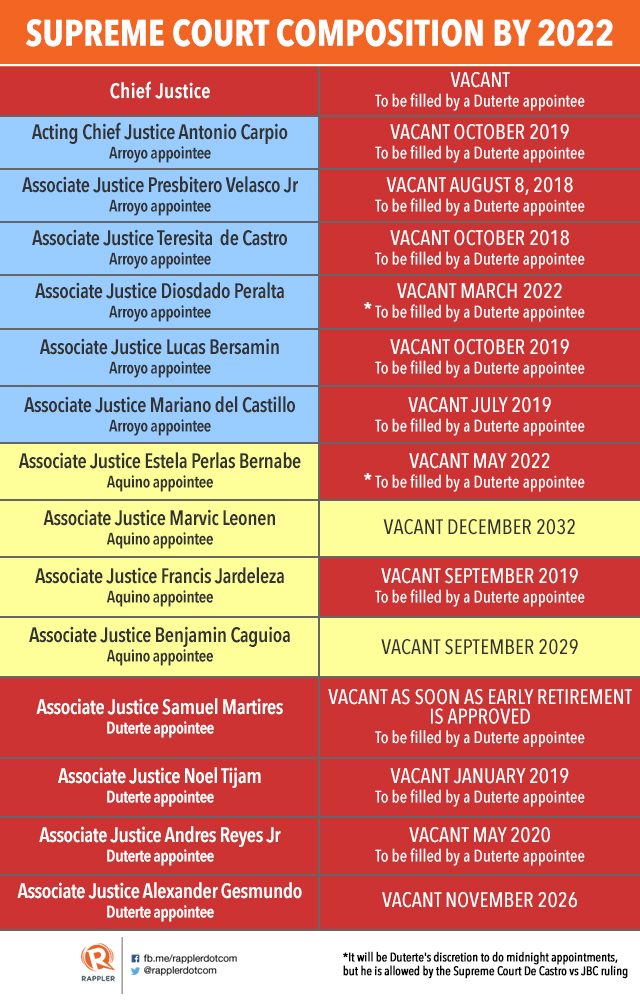 Duterte would be similar to former president Gloria Macapagal Arroyo in terms of SC appointees. By the time Arroyo stepped down in June 2010, her appointees filled 14 of the 15 posts in the Court.

The retirements of Peralta and Bernabe come so close to the May 2022 elections – if there would be elections – and it would be up to Duterte to make midnight appointments, which is allowed and legal.

In De Castro vs Judicial and Bar Council (JBC), the SC in 2010 lifted the ban on midnight appointments in the High Court.

It’s important to watch how these appointments will go because the SC stands to decide landmark cases during Duterte’s term.

The High Court will rule whether Leni Robredo will stay as Vice President or if Ferdinand Marcos Jr will take the 2nd highest position of the land. When efforts towards federalism come to stretch, the Supreme Court will decide the mode to change the Constitution, if at all.

The most immediate case that involves the Duterte administration is the constitutionality of the war on drugs.

Watchdogs monitor appointments to the SC to ensure it doesn’t revert to the Marcos Court, which was accused of enabling the Marcos dictatorship and the human rights violations that resulted from it.

The upcoming SC appointments again put the spotlight on the JBC, which will vet the applicants for the posts.

The term of lawyer Jojo Mejia, who represents the academe, expired last July 7. It’s unclear if he would be reappointed to a second term, or if Duterte will pick a new member.

Milagros Fernan Cayosa, who represents the Integrated Bar of the Philippines (IBP), is serving her second term, which expires July 2019.

This means that by 2022, all 4 regular members of the JBC may all be Duterte appointees, too. (READ: EXPLAINER: How the Judicial and Bar Council works)

The new chief justice will serve as ex-officio JBC chairman.

The ex-officio members are Justice Secretary Menardo Guevarra; and, barring any changes because of the leadership rotations in Congress, Senator Richard Gordon and Oriental Mindoro 2nd District Representative Reynaldo Umali.

Retired ombudsman Conchita Carpio Morales said there has never been concrete evidence that JBC members are “intimidated or coerced” to put a favored applicant on its short list.

“But all I can say is that a certain member of the JBC was catering, waltzing with politicians because he wanted to be reappointed to another term,” Morales said last Friday, July 27, during a forum of the Foreign Correspondents Association of the Philippines.

Morales said she “blames” the JBC for the continuing corruption in the judiciary.

“There was a time that politics intervened seriously in the choice of judges. How else would you explain that scalawags, people who are known to be corrupt, and who are actually said to be corrupt are still in the judiciary? So I blame the Judicial and Bar Council,” she said.

She added, “There ought to be a strict examination of credentials, background, of who are going to be appointed as members of the JBC.” – Rappler.com