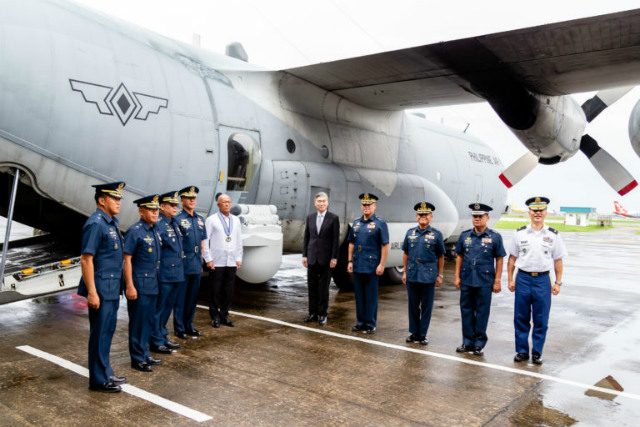 Facebook Twitter Copy URL
Copied
'We can use this for surveying areas devastated by typhoons, before and after, so that we can assess the damage,' says Defense Secretary Delfin Lorenzana

US Ambassador to the Philippines Sung Kim turned over this Special Airborne Mission Installation and Response (SABIR) system to Philippine Defense Secretary Delfin Lorenzana at the Villamor Air Base in Pasay City on Tuesday, August 14.

“We have great respect for the Armed Forces of the Philippines so we wanna do our part as friends, partners, allies,” Kim said in an interview with reporters.

“We can use this for surveying areas devastated by typhoons, before and after, so that we can assess the damage,” Lorenzana added, as monsoon rains pound the Philippines, affecting nearly 700,000 Filipinos as of Tuesday.

The US embassy described the SABIR system as “a bolt-on avionics module for the C-130 Hercules aircraft.” It said the system “upgrades the aircraft with advanced command and control, communications, computer, and surveillance and reconnaissance capabilities without sacrificing the aircraft’s primary function as a cargo plane.”

The US provided the system to the Philippine Air Force through the Maritime Security Initiative funding, “a US initiative to build the maritime capacity of Southeast Asian nations.”

This is the latest in the complex ties between Manila and Washington. Philippine President Rodrigo Duterte lambasts the US for supposedly interfering in his anti-drug campaign, but the President’s men – including Lorenzana, a former Philippine defense attaché to the US – continue working with Washington on the ground.

Just last August 6, Lorenzana announced that the US is transferring 4 OV-10B planes to the Philippines to help in counterterrorism. In May, Lorenzana joined Executive Secretary Salvador Medialdea and Foreign Secretary Alan Peter Cayetano, among others, in meeting then US Pacific Command chief Admiral Harry Harris Jr in Hawaii.

At the center of it all is Kim, a seasoned diplomat and an expert in dealing with the likes of North Korea’s Kim Jong-Un. The successor of Philip Goldberg whom Duterte detested, Kim has managed to warm ties with the Filipino firebrand who once threatened to cut ties with Washington.

Questions persist, however, if the US is willing to defend the Philippines in case war erupts in the West Philippine Sea. On counterterrorism, Duterte also asked in May, “Is America ready to die for us?” – Rappler.com