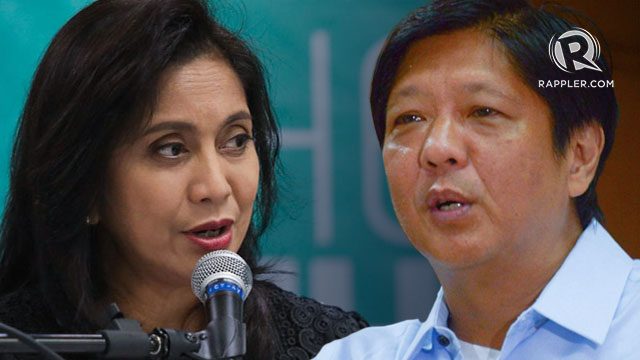 MANILA, Philippines – The camp of Vice President Leni Robredo remains confident she would win the electoral protest filed against her, despite a recent string of attacks from President Rodrigo Duterte.

“Insofar as we are concerned, President Duterte’s resignation will never happen because Mr Marcos will never win his electoral protest,” Macalintal, a veteran election lawyer, said on Thursday, August 16.

In Naga City, Robredo continued to refuse to be drawn into a verbal exchange with Duterte over his latest tirade, saying she would rather spend her time on things that need to be done.

(I don’t want to react. I don’t want to respond to those kinds of statements because it won’t do anything. The country has a lot of problems. Let’s just address the country’s problems rather than politics. We were elected [to serve] until 2022.)

“Obligasyon namin pareho na gawin iyong lahat naming makakaya para sa bayan, kasi iyon iyong mandato sa amin. Kaysa mag-aksaya ng panahon nang hindi naman totoo iyong mga sinasabi, magtrabaho na lang kami pareho (We both have the obligation to do all we can for the country, because that is our mandate. Rather than waste time on things that are not true, let’s just both work),” she added.

Robredo beat Marcos by just 263,473 votes during the 2016 polls, prompting the latter to allege cheating and file an electoral protest against her.

Duterte has always been open about his admiration for and close friendship with Marcos, namesake of his idol, the late dictator Ferdinand Marcos.

The President said on Tuesday, August 14, that he would step down if someone like Marcos or Senator Francis Escudero were next in line. (READ: Robredo spokesman taunts Duterte: You forgot Cayetano again!)

Since July, the President has disparaged Robredo twice on her supposed “incompetence” to lead the country if he steps down.

Aside from waiting for the “right” successor, Duterte also floated a military junta taking over after he resigns. He even said he himself would swear in a military general as head of government. (READ: EXPLAINER: Duterte’s dream resignation, ‘junta’ and successor scenarios) – Rappler.com