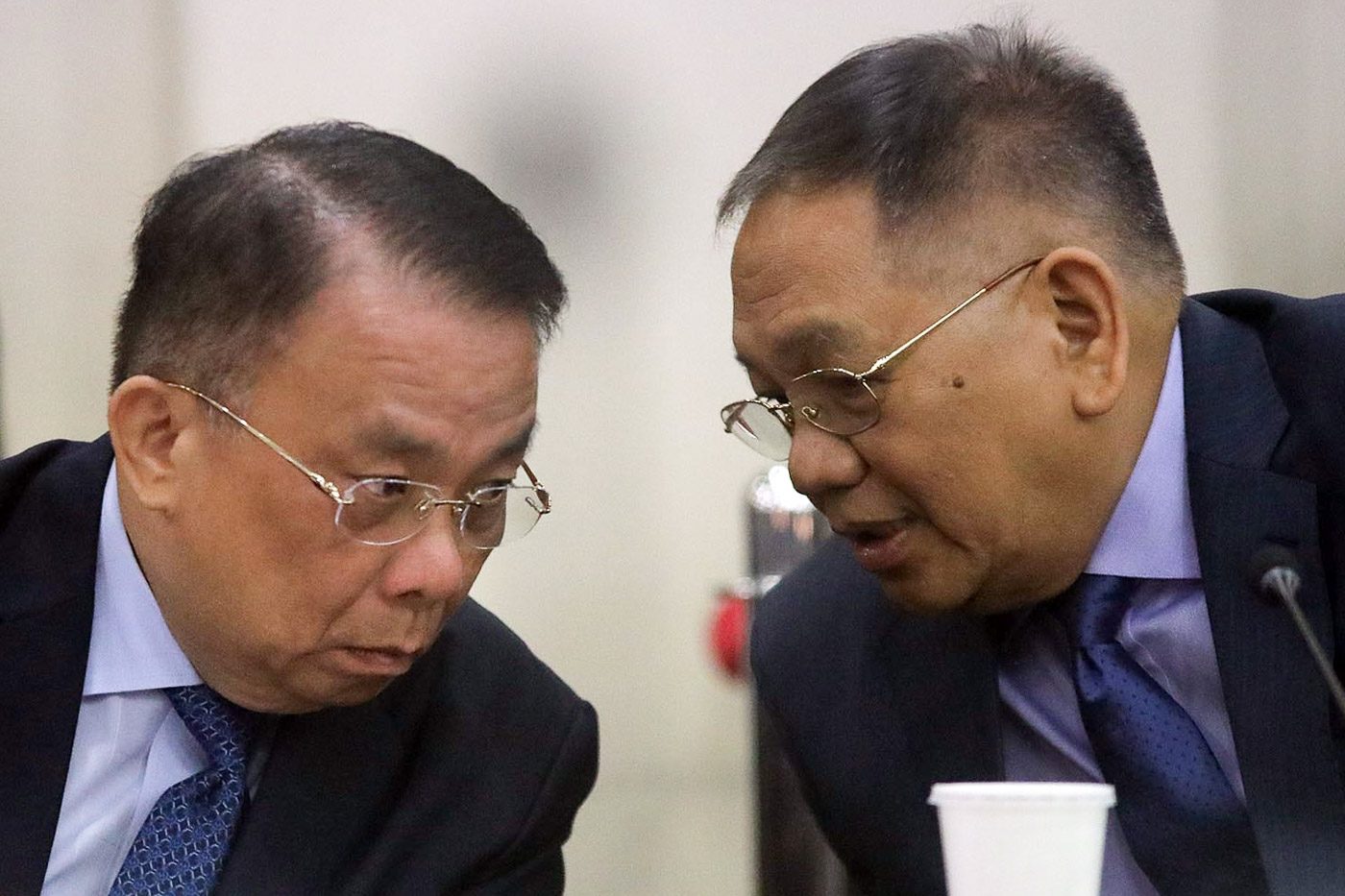 The two have been observed to have the tendency to vote similarly.

In the labor case against Philippine Airlines or PAL, for example, their votes were so similar that they even flip-flopped together.

On October 2, 2009, Peralta and Bersamin concurred with the Special Third Division decision that declared invalid PAL’s retrenchment of 5,000 of its workers.

It was a unanimous decision among the 5 members of the division, penned by retired justice Consuelo Ynares-Santiago. And in that decision, the SC said “no further pleadings will be entertained.”

Fast forward to 2018, or 9 years later, the SC en banc reversed two previous decisions of the Court, the Santiago decision being the latter one, and declared valid PAL’s retrenchment.

Despite their concurrences 9 years earlier to the decision that the retrenchment was invalid, Peralta and Bersamin made a sudden turn-around.

Bersamin was even ponente this last time.

Associate Justice Marvic Leonen, one of the two dissenters in the 2018 decision, said that PAL’s victory “creates an ominous cloud that will besmirch our legitimacy.”

The case was resurrected through letters of PAL lawyer Estelito Mendoza. For Leonen, the resurrection was “highly irregular, suspect, and violative of due process of law.”

In his 2018 ponencia, Bersamin said Leonen has a “narrow view” of just what the en banc can do. (READ: #CJSearch: How did aspirants vote on key Supreme Court decisions?)

We look at the 2009 and 2018 decisions to see how both justices flip-flopped.

For example, in 2009, Peralta and Bersamin concurred with the decision that PAL did not submit proof of its financial losses, therefore they cannot use it as justification for the retrenchment. But in 2018, both voted that PAL was not obligated to submit proof.

The 2009 decision of the Special Third Division, concurred in by Peralta and Bersamin said:

Assuming that PAL was indeed suffering financial losses, the requisite proof therefor was not presented before the NLRC which was the proper forum.

The 2018 decision of the en banc, written by Bersamin and concurred in by Peralta said:

The Special Third Division should have realized that PAL had been discharged of its duty to prove its precarious fiscal situation in the face of FASAP’s admission of such situation. Indeed, PAL did not have to submit the audited financial statements because its being in financial distress was not in issue at all.

In the 2018 decision, Bersamin said that it was the Flight Attendants and Stewards Association of the Philippines (FASAP) that brought up PAL’s financial losses.

In a position paper, FASAP said “it must be pointed out that complainant was never opposed to the retrenchment program itself, as it understands respondent PAL’s financial troubles.”

So from 2009 when the division said that PAL should have submitted proof of its financial losses, Bersamin in 2018 used FASAP’s position paper to say that presenting proof was not PAL’s duty.

In 2009, both justices agreed PAL cannot easily retrench just because the pilots went on a labor strike, but in 2018, they decided that the strike crippled the operation so much that the retrenchment was “understandable.”

The 2009 decision of the Special Third Division, concurred in by Peralta and Bersamin said:

In the instant case, PAL admitted that since the pilots strike allegedly created a situation of extreme urgency, it no longer implemented cost-cutting measures and proceeded directly to retrench. This being so, it clearly did not abide by all the requirements under Article 283 of the Labor Code. [The retrenchment] was brought about by and resorted to as an immediate reaction to a pilots strike which, in strict point of law and as herein earlier discussed, may not be considered as a valid reason to retrench, nor may it be used to excuse PAL for its non-observance of the requirements of the law on retrenchment under the Labor Code.

The 2018 decision of the en banc, written by Bersamin and concurred in by Peralta said:

Given PAL’s dire financial predicament, it becomes understandable that PAL was constrained to finally implement the retrenchment program when the Association of Airline Pilots of the Philippines (ALPAP) pilots strike crippled a major part of PAL’s operations. In Rivera v. Espiritu, we observed that said strike wrought “serious losses to the financially beleaguered flag carrier;” that “PAL’s financial situation went from bad to worse;” and that “faced with bankruptcy, PAL adopted a rehabilitation plan and downsized its labor force by more than one-third.” Such observations sufficed to show that retrenchment became a last resort, and was not the rash and impulsive decision that FASAP would make it out to be now.

On the topic of the quitclaims signed by the employees, the justices went from regarding them as reasons why PAL can afford to pay damages and backwages, to using them as further proof that the retrenchment was valid.

In the 2009 decision, the Special Third Division acknowledged the quitclaim and said it would  reduce the amount that PAL has to pay in damages and back wages.

Likewise, a significant portion of these retrenched flight attendants have already received separation pay and signed quitclaim. All of these factors, to the mind of the Court, will greatly reduce the quoted amount of the money judgment that PAL will have to pay.

In the 2018 decision, the en banc ruled the quitclaims as valid and used it as added basis to declare the retrenchment valid.

The release and quitclaim signed by the affected employees substantially satisfied the aforestated requirements.

Before the 2009 decision, there was another decision by the 3rd division which declared the retrenchment invalid. That was the July 2, 2008 decision of the Third Division which was concurred in by Associate Justice Teresita Leonardo de Castro.

The PAL case is not the only flip-flop that drew flak for the SC.

The League of the Philippine Cities (LCP) contested it because they would share the Internal Revenue Allotment (IRA) with more cities, which means they would lose an average of P20 million.

The LCP’s argument is that the municipalities were unqualified to become cities because they do not meet the minimum income requirement.

The court flip-flopped because it allowed more proceedings after it denied a motion for reconsideration (MR). Typically, a 2nd MR is prohibited. In this case, the en banc tackled the case a total of 6 times.

The reason for the continued resurrection was allegedly letters from the municipalities’ lawyer: none other than Mendoza. Letters were the same strategy employed in the PAL case.

Bersamin would come to write the 2011 final decision, in favor of Mendoza’s clients. The cityhood case and the PAL case are two of SC cases where Bersamin favored Mendoza.

Among such cases are the bail grant to Juan Ponce Enrile and the plunder acquittal of Gloria Macapagal Arroyo.

Bersamin and Peralta have been friends for a really long time.

Peralta told the Judicial and Bar Council (JBC) during the public interviews on August 16 that their friendship started when he and Bersamin were trial court judges in Quezon City. They took lunches together inside the courtroom.

“There were rumors, they would say, sino ba sa kanila, sa dalawa (who between the two of them…)? But when we meet on lunchtime, we discuss jurisprudence, because he is an expert on procedure and he considers me good in criminal procedures,” Peralta said.

Peralta only had good words for Bersamin during the JBC interview.

“I see him as competent and ready to assume the position [of] Chief Justice, I hope that is the same way he feels about me,” Peralta said.

At a lawyers’ forum at the University of the Philippines (UP) last July, a member of the audience asked about perceived corruption in the Supreme Court, citing as example Mendoza’s alleged influence on the Bench.

If either Peralta or Bersamin become chief justice, this is one of the issues they would have to address to win the full trust of the public they will serve. – Rappler.com