Duterte not impressed by Pompeo, Mattis letter on U.S. equipment 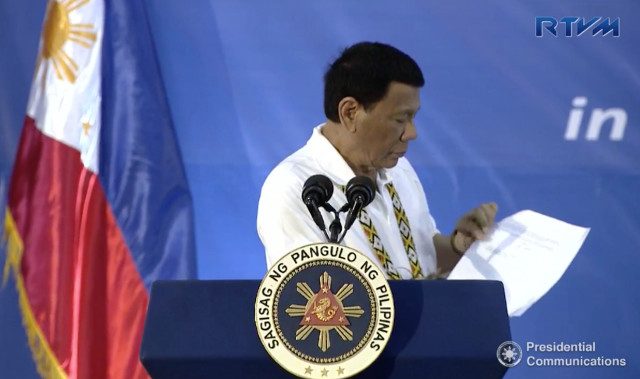 He read the letter out loud on Thursday, August 23, during the Eastern Mindanao Command anniversary in Davao City.

The letter, said Duterte, is the US’ way of “making up” for slights against the Philippines. Previously, Duterte railed against a defense official’s remarks discouraging the Philippines from purchasing defense equipment from Russia.

He pointed out that 3 US Cabinet members signed the letter. Aside from Pompeo and Mattis, US Secretary of Commerce Wilbur Ross was also supposedly a signatory. The letter was sent by US Ambassador Sung Kim.

“I have nothing against America and am sure wala rin kayo (you don’t have anything against them either)…but mine is more of just the what is the reality on the ground. Ngayon, bumabawi sila (Now, they are taking it back), 3 Cabinet members in one letter,” said Duterte.

Below is the letter from the US officials as read by Duterte:

President of the Republic of the Philippines

The US-Philippines Alliance is an enduring partnership built on shared history and values. The special relationship will only grow stronger by increasing our dialogue and cooperation especially in security cooperation and trade. At the same time, we keenly understand your country’s need for certainly when considering the selected technology for the defense and security of the Filipino people. We’re writing to you to reaffirm this administration’s strongest support for your efforts to modernize the Armed Forces of the Philippines and our commitment to work with your Congress to support the strategic endeavors, recent decisions to procure and grant upgraded survelliance and aircraft system such as Bell combat utility helicopters and ScanEagle, Gulfstream, and Cessna 208 aircraft exemplify our continuing commitment to the breadth and strength of our alliance. We know that our nations can do even more to integrate our economic and security concerns, especially we hope to partner in other significant defense procurement of our mutual benefit inclding through the Lockheed Martin F-16 Multi-role Fighter Platform and your attack helicopter platform among other US systems. The United States is peerless (“walang katumabas,” inserts Duterte) supplier of state of the art technology with a proven track record and a longterm reliable partner, for example in supplying precision guided munitions used during Marawi. We hope you share our view that our nation’s slection of US partners for this future US defense procurement is mutually advantageous and strategically important way to strengthen and deepen the steadfast bond between our…(Duterte trails off).”

Duterte then said he wants to meet with the 3 US Cabinet members but that he wouldn’t fly to the US for that.

“I want to meet 3 of them, mamili sila (they choose). ‘Di ako pupunta Amerika (I won’t go to America),” said Duterte.

He also slammed the US for “dangling” defense equipment the Philippines supposedly does not need.

“What I need are just propeller-driven planes for anti-insurgency. Wala man tayong ibang kalaban (We don’t have any other enemies) – NPA, ISIS, Abu Sayyaf. We don’t need M16 and yet they dangle before us after binaboy nila tayo (they insulted us),” said Duterte.

While he acknowledged that the US and Philippines have special ties, he found the term “friends” hard to stomach.

“Mahirap sabihin mo (It’s hard for you to say) we are friends. We are friends but remember we are friends because you made us a colony years ago, ‘wag mo sabihin (don’t say) friend, friend. It was not a friendship agreed upon,” said the Philippine leader.

In the same speech, he brought up the US’ plan to return the historic Balangiga Bells to the Philippines. He said there would be no discussion until the bells are brought back.

He reiterated that the Philippines would not forget the massacre of Filipinos by American soldiers.

“Why, can passage of time cure an injustice? Just because it was 100 years it was erased and the bells are over there and the memory still haunts everybody here,” he said. – Rappler.com