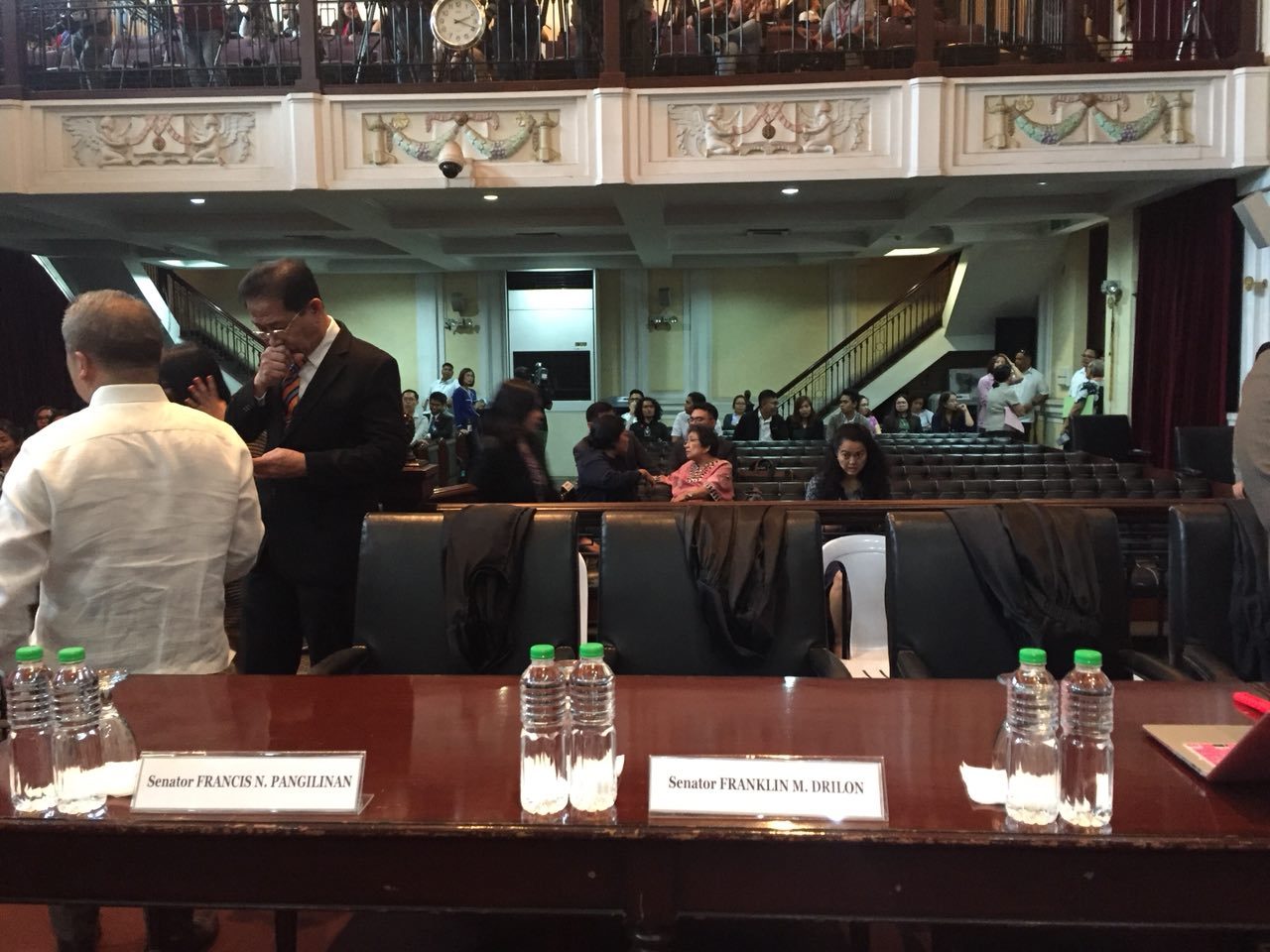 MANILA, Philippines – Opposition Senators were a no-show on Tuesday, August 28, when the Supreme Court heard in oral arguments their petition questioning the validity of President Rodrigo Duterte’s withdrawal from the International Criminal Court (ICC).

The hearing which should have started at 2 pm started past 2:45 pm on Tuesday while the seats of Senators Francis Pangilinan, Franklin Drilon, and Paolo Benigno “Bam” Aquino IV remained empty.

They sent instead lawyer Anne Marie Corominas who explained that the senators want more time to decide how they will proceed, given that the Court has denied twice their request to let detained Senator Leila de Lima represent them at the oral arguments.

Corominas asked the Court on the spot if it has acted on a motion for reconsideration filed by the senators.

“The court resolution was released last Thursday, and the petitioners acknowledged receipt of such resolution. The motion was denied,” said Chief Justice Teresita Leonardo de Castro.

De Castro said the en banc also denied the motion for reconsideration to allow De Lima to participate through a live video conference from her jail cell at Camp Crame.

“Petitioner senators respectfully move that they be given until the next session of the oral arguments within which to decide an appropriate course of action with the issue of representation of these proceedings,” Corominas said.

The Court has postponed the oral arguments thrice, the latest due to the senators’ request to find a lawyer who would represent them in place of De Lima.

During that period, the senators instead filed motions for reconsideration asking for the same thing.

The Court said there was no compelling reason why De Lima should be allowed furlough, as her skills to represent the senators are not exclusive to her. (READ: Playing the cards right? Politics of ICC oral arguments)

The senators, including De Lima, cited the other court’s holiday furlough grants to the likes of former president Gloria Macapagal Arrroyo, and said a furlough to argue in the Supreme Court “is surely a more justifiable reason.” (READ: PH courts inconsistent in letting detainees attend family events)

The Court proceeded with the oral arguments, with the other petitioner, the Philippine Coalition from the ICC, or PCICC, presenting.

Early on in the oral arguments, Associate Justice Marvic Leonen asked PCICC’s Ray Paolo Santiago what his legal standing is in questioning the withdrawal from the ICC, adding that everyone could be human rights advocates.

The senators have a stronger legal standing because it’s their concurrence which was supposedly snubbed when Dutertre withdrew from the ICC.

Solicitor General Jose Calida represents the executive. No one from Malacañang attended the oral arguments on Tuesday.

LISTEN to the proceedings at the Supreme Court. – Rappler.com