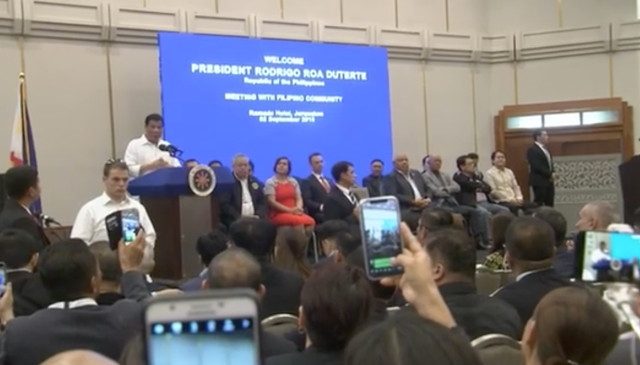 MANILA, Philippines (UPDATED) – Philippine President Rodrigo Duterte touched down in Jerusalem at 8:30 pm on Sunday, September 2 (1:30 am Monday in Manila), kicking off his 4-day visit to Israel.

Alighting from his Philippine Airlines chartered plane beside his daughter, Davao City Mayor Sara Duterte-Carpio, Duterte became the first sitting Philippine president to set foot in Israel. It’s a new milestone in the over 60-year diplomatic ties between the two countries.

From the airport, Duterte headed straight to a gathering of overseas Filipino workers in Ramada Hotel where he sang “Ikaw,” a famous Filipino love song, and promised then an unrelenting campaign against crime and corruption.

Duterte brought with him defense and security officials, aside from several Cabinet members and their spouses.

Israeli news site Times of Israel said Duterte’s delegation numbers 400 and that this includes military and police officers who may visit army bases.

Presidential Spokesman Harry Roque, however, said he is “not sure” where the figure of 400 came from. Aside from a 46-member official delegation with accompanying delegates, there is a “substantial business delegation of at least 150,” he said in a message. Members of the business delegation are “all traveling on their own accounts,” said Roque.

Here are officials who are in Israel with the President:

Justice Secretary Menardo Guevarra was designated caretaker of the country while Duterte and Medialdea are abroad.

On his first full day in Israel, Duterte will meet with Israel Prime Minister Benjamin Netanyahu and have a working lunch with him and other Israeli officials.

He will also lay a wreath at Yad Vashem or the World Holocaust Remembrance Center, Israel’s official memorial to the Jews who died during the Holocaust.

It can be recalled that Duterte once compared himself  to Adolf Hitler, a statement that drew widespread condemnation, including from Germany.

“Hitler massacred 3 million Jews. Now there [are] 3 million drug addicts….I’d be happy to slaughter them,” he had said back in September 2016.

Most historical accounts say 6 million Jews died in the Holocaust.

A few days later, Duterte visited a synagogue to personally apologize to the Jewish community in the Philippines for his remarks.

On Tuesday, September 4, Duterte will have a meeting with Israel President Reuven Rivlin, a meeting already steeped in controversy. Human rights activists called on Rivlin to scrap the meeting, saying it is “inappropriate” for him to meet with Duterte, who they described as a “mass murderer.”

Duterte will also witness the signing of agreements between Filipino and Israeli businessmen on Tuesday.

On Wednesday, Duterte will end his visit by laying a wreath at the Open Doors Monument at the Rishon Lezion Memorial Park, just outside Tel Aviv. The monument is Israel’s tribute to Philippine President Manuel Quezon who, through his “Open Doors” policy allowed up to 10,000 Jews to seek refuge in the Philippines during the Holocaust.

After paying his respects at the monument, Duterte will fly to Jordan for a 4-day visit, which includes a meeting with King Abdullah II.

While in Israel, Duterte will witness the signing of at least 3 documents between the Philippine and Israel governments: