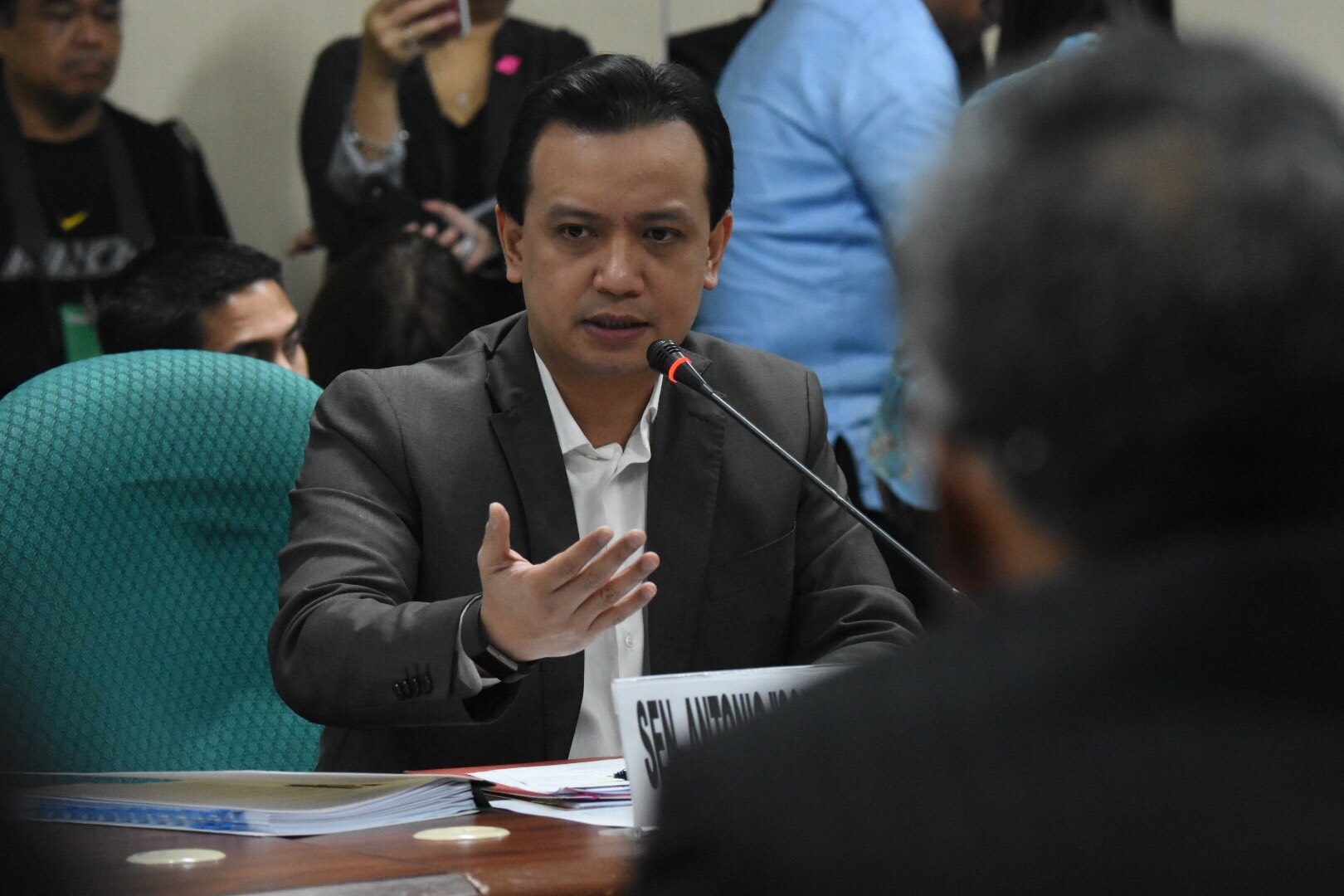 Proclamation No. 572 was published in the Tuesday, September 4, issue of the Manila Times, under the advertisements section. Justice Secretary Menardo Guevarra confirmed the issuance of the proclamation to Rappler.

“The grant of amnesty to former LTSG Antonio Trillanes IV under Proclamation No. 75 is declared void ab initio because he did not comply with the minimum requirements to qualify under the Amnesty Program,” the proclamation states. Duterte ordered the Department of Justice and the Armed Forces of the Philippines (AFP) “to pursue all criminal and administrative cases” against Trillanes in relation to the Oakwood mutiny and the Manila Peninsula incident, which happened in 2003 and 2007, respectively.

He also ordered the Philippine National Police (PNP) and the AFP “to employ all lawful means to apprehend” Trillanes so that he can be recommitted to his previous detention facility, the PNP Custodial Center.

Trillanes told reporters on Tuesday that he would not go into hiding and that he was ready to face what he called a “bogus” order. (READ: Trillanes vows to face arrest: ‘Mr Duterte, hindi ako takot sa iyo’)

In October 2010, then-president Benigno Aquino III signed Proclamation No. 50, a general amnesty proclamation for mutineers in the 2003 Oakwood mutiny and the 2007 Manila Peninsula siege against the administration of then-president Gloria Macapagal Arroyo.

Aquino later issued Proclamation 75 in November 2010, superseding Proclamation 50. It was concurred in by both chambers of Congress in December 2010.

Trillanes, who was already a senator, formally applied for amnesty in January 2011 – within the application period. He was included in the list of officers and soldiers officially granted amnesty that same month.

Asked if Congress concurrence is needed for Proclamation No. 572, Guevarra told Rappler, “No need because it was void ab initio.”

Duterte issued the proclamation nearly two months after Trillanes said the PNP removed his security detail. The PNP explained that it was part of a “comprehensive review” of police assignments.

Senate President Vicente Sotto III refrained from issuing the Senate position on Proclamation 572 pending a discussion among senators on the “serious and legal case.” He said he had yet to receive an official copy of the document as of Tuesday noon.

In 2017, Chief Presidential Legal Counsel Salvador Panelo first floated the idea and said he would review it.

“There are some legal quarters expressing the same uncertainty or doubt on that. I’ll go over the case. Anything that is not the law can be a precedent. It is always in the context of the law. So kung nagbigay siya ng amnesty na mali, hindi valid iyon (So if he granted an illegal amnesty, then it’s not valid),” Panelo said in a Palace briefing.

In his ethics complaint against Trillanes in September 2017, Senator Richard Gordon had cited the senator’s involvement in the 2003 and 2007 coup d’etat attempts during the Arroyo administration as among the grounds for his removal from the Senate.

In defense of Trillanes at the time, Senate Minority Leader Franklin Drilon called for the removal of those grounds in the complaint since Trillanes was not yet a senator in 2003, while the other incident happened in 2007.

Trillanes is one of the most vocal critics of Duterte. He filed a plunder complaint against Duterte months ahead of the 2016 presidential elections for alleged undeclared wealth, but the Ombudsman ended the investigation in November 2017.

In a speech in Cebu City in June, Duterte said that Trillanes would be “shot” someday because of his “arrogance.” The President said,  “There will come a day that someone will shoot him because he’s arrogant.”

In response, Trillanes said, “Go ahead, Mr Duterte, order somebody to shoot me and, I assure you, it would lead to your end.” (READ: Trillanes hits Duterte for saying ‘someone will shoot him someday)

Trillanes also drew the ire of other members of the presidential family, particularly resigned Davo City vice mayor Paolo Duterte and Manases Carpio, the husband of Davao City Mayor Sara Duterte Carpio, whom he both accused of involvement in smuggling.

Sara had also slammed Trillanes for alleging that she and her father had secret bank accounts.

After the arrest of Senator Leila de Lima, another fierce critic of Duterte, Trillanes said he was ready to face the consequences of his resistance and to be detained again. (READ: Trillanes ready to die fighting Duterte) – with reports from Pia Ranada/Rappler.com