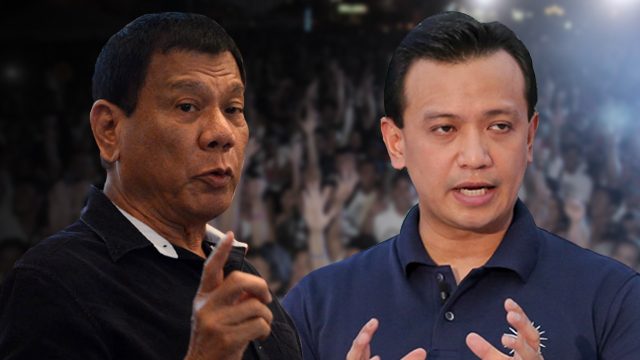 MANILA, Philippines – Malacañang claimed the revocation of Senator Antonio Trillanes IV’s amnesty has nothing to do with politics but everything to do with the rule of law.

“There is nothing political, these are all his acts. Dapat panagutan ang ginawa ng kahit sino (Everyone should be held accountable for their actions),” said Presidential Spokesman Harry Roque on Tuesday, September 4.

He held a hastily-called press briefing in Jerusalem, Israel right after news broke that President Rodrigo Duterte voided the granting of amnesty to Trillanes.

Malacañang said amnesty was only granted to the senator during the previous administration because he had good ties with then president Benigno Aquino III. (READ: Trillanes says Duterte reinventing the law)

“We’re saying he was given amnesty by President Aquino because of politics and the decision of (void) ab initio is based on law and on facts,” said Roque.

The grant of amnesty was declared invalid from the start because Trillanes supposedly did not fulfill all the requirements needed for a grant of amnesty – an application for amnesty and admission of guilt for the crime.

The review of Trillanes’ case has been going on for “two years” during which time the Duterte administration scoured records to ensure the senator really did not file an application. (READ: Don’t become a Judas like Trillanes, Duterte tells gov’t officials)

“Hindi po biglaan ito (This was not a sudden development). There was maximum tolerance shown. When it was shown that there was no compliance with the amnesty requirements, the President had no alternative. Trabaho lang po (We’re just doing our job),” said Roque.

When asked how Trillanes’ application could be missing when media had covered his filing for amnesty, Roque said, “We’re relying on official records. There’s no substitute for that.”

The amnesty granted to other military officers will likely be reviewed.

“I think there will be a review and we will find out who else must [have their amnesty] declared void ab initio,” said Roque.

Trillanes has been the subject of Duterte’s verbal attacks ever since he started making claims about the President’s hidden wealth. He has been one of Duterte’s most outspoken critics, making no-holds-barred comments on his health, alleged corruption by top presidential appointees, and the involvement of his family members in criminal activities. (READ: 8 Things to know about Trillanes)

Duterte himself has yet to speak publicly about the amnesty revocation. He will be abroad until September 8 as he continues his visits to Israel and Jordan. – Rappler.com