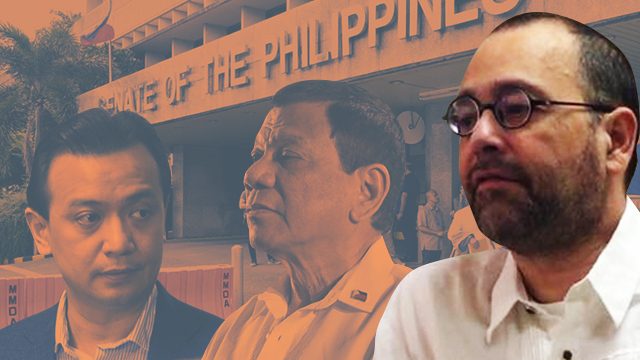 Facebook Twitter Copy URL
Copied
'The hallmark of a strong democracy is that it guarantees separation of powers, checks and balances, and respect for the views of the minority,' says Commission on Human Rights Chairman Chito Gascon

MANILA, Philippines – Commission on Human Rights (CHR) Chairperson Chito Gascon said on Tuesday, September 4, that the presidential proclamation revoking the amnesty granted to senator Antonio Trillanes IV appears to be an attempt to “weaken the opposition.”

Gascon made the statement when asked about Proclamation No 572, which declared the amnesty given to Senator Antonio Trillanes VI in 2011 “void ab initio.” (DOCUMENT: Proclamation No. 572 voiding Trillanes’ amnesty)

“At first glance, this appears to be another attempt on the part of the current administration to silence dissent and weaken the opposition,” Gascon told Rappler in a text message on Tuesday.

“The hallmark of a strong democracy is that it guarantees separation of powers, checks and balances, and respect for the views of the minority even if the will of the majority expressed in free and fair elections is pursued,” the CHR chief added.

Trillanes was among those who were granted amnesty in 2011, in connection with the 2003 Oakwood mutiny and the 2007 Manila Peninsula siege.

Malacañang said that there was “nothing political” about President Rodrigo Duterte’s latest move against one of his most vocal critics, whom he wants arrested and jailed following Proclamation 572.

In a media interview after the CHR budget hearing in the House of Representatives, Gascon echoed the sentiments of lawmakers and law groups  that the revocation “had no legal basis.”

“Kung minsan ka nang nagbigay ng amnesty at tinanggap ito, dapat po ay tapos na iyan (If you granted amnesty and it was accepted, that should be the end of it,” he said.

Responding to questions, Gascon said the CHR will look into the “implications” of Proclamation 572.

(As far as we know, as a constitutional office, there are requisites in granting an amnesty – processes, aspects that are all under the 1987 Philippine Constitution. We hope that the rights of Senator Antonio Trillanes IV will be protected under this process.)

Section 19, Article VII of the 1987 Constitution states that the President has the “power to grant amnesty with the concurrence of a majority of all the Members of the Congress.” It is, however, silent on the requirement to revoke the amnesty. (READ: FAST FACTS: What is amnesty?) – Rappler.com