EXPLAINER: Why Trillanes chose to go to the Supreme Court 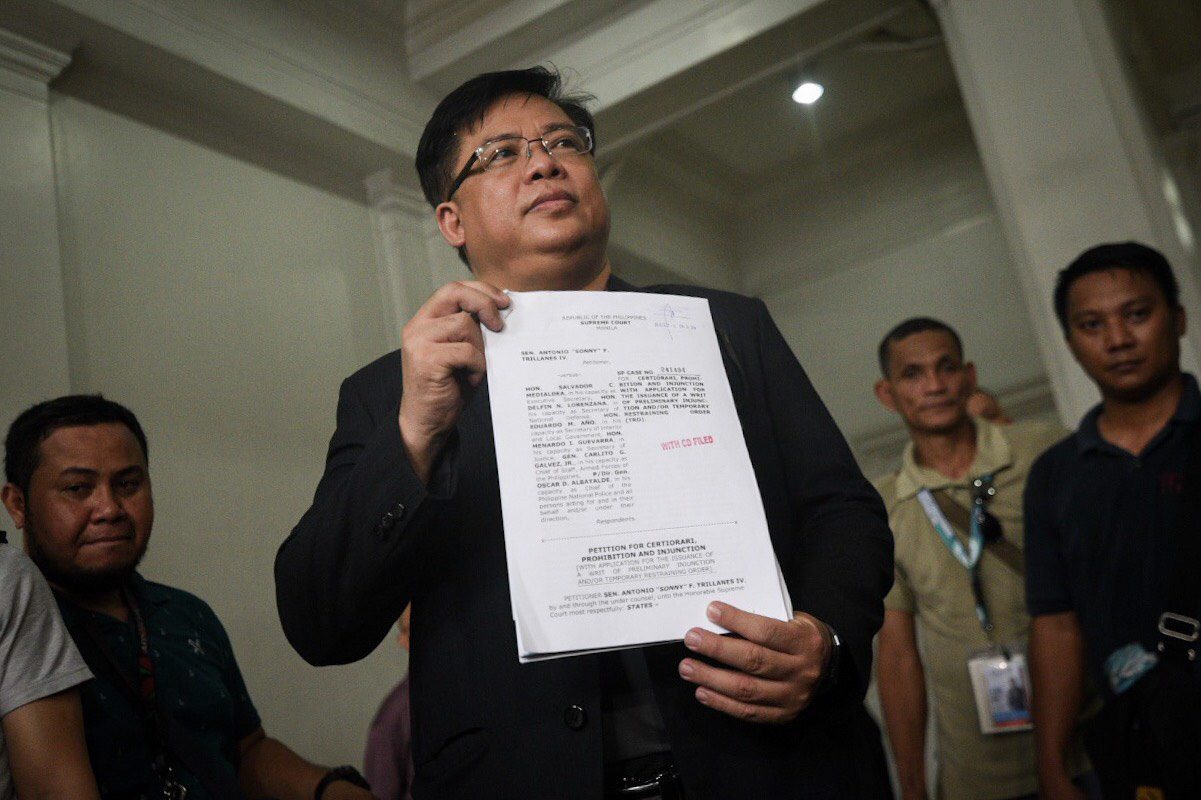 MANILA, Philippines – Despite friendly warnings, Senator Antonio Trillanes IV chose to file a petition before the Supreme Court (SC) instead of fight the voiding of his amnesty in the lower courts.

(Many people told us not to go to the Supreme Court because it has supposedly been politicized, and that the justices are loyal to the President. My view on this kind of issue is that our future and our lives are at stake here, so the justices will do what is right.)

In his 36-page petition filed before the SC on Thursday, September 6, Trillanes basically argues that President Rodrigo Duterte has no legal basis to void the amnesty granted to him in 2011.

He anchors his case on the lack of an expressed provision in the Constitution that allows a president to unilaterally void or revoke his amnesty. Section 19, Article VII, of the 1987 Constitution states that the President has the “power to grant amnesty with the concurrence of a majority of all the Members of the Congress.”

“Duterte’s and/or Respondents act of issuing and/or implementing Proclamation 572 is clearly unconstitutional as it violates the constitutional design clearly making the said power a joint power of the President and the members of both houses of Congress,” Trillanes said in his petition.

To an extent, he also presents factual issues  of his case, submitting copies of certifications for his amnesty application that seek to debunk Duterte’s justification that the amnesty is void because he never applied.

On whether he admitted guilt, Trillanes said he couldn’t have applied without admitting guilit because the application form “particularly and specifically requires such admission.”

The application form is missing, says the Department of National Defense (DND), even though documents obtained by Rappler show the defense department certified the senator’s application.

Why the warning? Parallelisms are being drawn to Trillanes and the drug charges against detained Senator Leila De Lima, another staunch critic of Duterte.

De Lima lost to the ruling of a majority of 9, a ruling that Senior Associate Justice Antonio Carpio said was one of the “grossest injustices” in the country.

By going to the SC, Trillanes would be risking a similar loss.

The Duterte administration, through its lawyer Solicitor General Jose Calida, has a winning streak in the Supreme Court, losing one time only when the SC compelled him to submit drug war documents.

Why not the RTC? The Makati RTC is set to resolve a request for a warrant of arrest against him.

Branch 148 Judge Andres Bartolome Soriano acknowledged the peculiarity of trying to reopen a case that was dismissed way back 2011.

“When the case has been decided, one way or the other, let’s say there is no conviction, there should be double jeopardy, the matter of double jeopardy  sets in, but whether that is applicable to this particular case as I said earlier, given the different nuances that has arisen, we cannot commit and say it should be equally applicable here, all I can say we will study the matter closely,” said Soriano.

One of the ways he can rule is to re-affirm the dismissal of the case against Trillanes, shutting the door to the Department of Justice (DOJ) unless they file an entirely new case.

But if they go to the RTC, Trillanes would be acknowledging the jurisdiction of the lower court. It is their position that because the cases have been dimissed, the lower court has lost the right to handle the case.

Robles said, however, they would still file their reply to Judge Soriano who will hear on September 13 the motion to release a warrant.

(What we’re saying is that if the case was dismissed in September 2011, obviously there is no longer a case that can be revived. If you revive it, that would be a violation of the right of Senator Trillanes against double jeopardy.)

Trillanes said going to the Supreme Court would precisely test the independence of the justices.

(We will find out if we’re still a democracy or if all branches of government can be dictated by Duterte.)

As Judge Soriano said, Trillanes’ case “is like a game of chess, it depends on what parties move.”

Is Trillanes making the right moves?