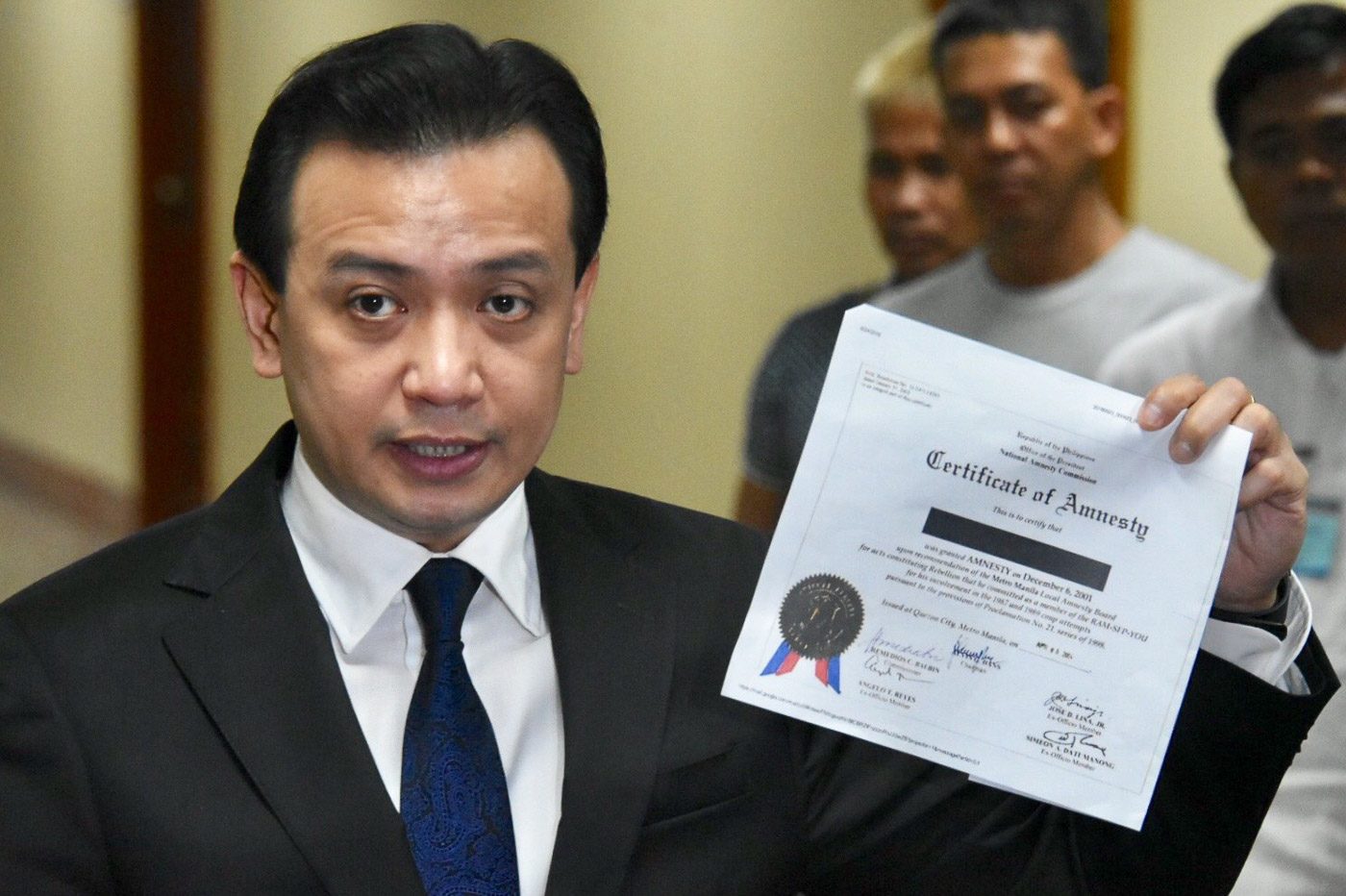 Branch 150 Judge Elmo Alameda granted the request by the Department of Justice (DOJ) for an arrest warrant and hold departure order on Tuesday, September 25.

In his order, Alameda fixed a bail of P200,000 for Trillanes’ temporary liberty.

In his order, Alameda said he finds that “it has now becoming glaringly clear that Senator Trillanes failed to substantiate his claim that he filed his application for amnesty.”

Trillanes failed to present “the original hard copy, a duplicate copy, or even a photocopy showing that he personally accomplished and filed with the DND Amnesty Committee his official Amnesty Application Form duly acknowledged and stamp marked received by said office,” Alameda wrote.

This, despite the sworn affidavit of a DND officer certifying that an application was indeed filed.

Alameda gave no weight to the certifications of Azcueta and Berbigal. “Such substitute documents must be disregarded, being barren of probative weight to prove compliance by Senator Trillanes,” he wrote in his order.

Trillanes could not find the copy of his application for amnesty that is why he wanted the court to admit other evidence and various documents as proof of his compliance with requirements for the grant of amnesty. Alameda wanted “primary evidence.”

He also said he presumes Duterte’s Proclamation No. 572 is legal, unless and until the Supreme Court deems it otherwise. Alameda wrote: “Unless Proclamation No. 572 series of 2018 is declared to be invalid, illegal and unconstitutional by the Supreme Court, it is presumed to be valid and legal. Thus, the immediate effect of its issuance is the revocation of the amnesty granted to Sen. Trillanes.”

Alameda also said that even with the earlier September 7 ruling of the court that dismissed his rebellion case, double jeopardy does not apply to this case. The requisites for double jeopardy, according to the order, are: “(1) a valid indictment, (2) before a court of competent jurisdiction, (3) the arraignment of the accused, (4) a valid plea entered by him, and (5) the acquittal or conviction of the accused, or the dismissal or termination of the case against him without his express consent.”

The case was earlier dismissed upon Trillanes’ own motion, Alameda pointed out. “Thus, the requirement that the dismissal of the case must be without the consent of the accused is not present in this case.”

Given the arrest warrant, Justice Secretary Menardo Guevarra said the “case is alive.”

Trillanes was presiding over a hearing of the Senate committee on social justice, of which he is a member, when news broke that the court had issued his arrest warrant.

Reacting to the issuance of the arrest warrant, Presidential Spokesperson Harry Roque said in an ANC interview Tuesday afternoon: “Since the President deferred to the regional trial court of Makati, and an order has already been issued for his arrest, we are hoping that Senator Trillanes will equally respect our court and voluntarily surrender to the court so that he may prove his innocence.”

“The court has spoken. As the President has said, we will respect the decision of the judiciary. Whatever Senator Antonio Trillanes IV has to say can be addressed to the court,” Roque said in a statement.

It was Judge Alameda who held a more exhaustive hearing on the Trillanes case, even asking the senator for the actual copy of the amnesty papers. These are factual issues despite Trillanes disputing the jurisdiction of the lower courts.

Trillanes headed to the Makati RTC to post bail. He was able to do so before the court closed late afternoon.

Rebellion is usually a non-bailable charge. But when the case was still ongoing at the RTC Branch 150, Judge Alameda himself granted the petition for bail. So that bail grant applied even today.

On September 14, Alameda ordered the Department of Justice (DOJ) to submit within 5 days a reply to the opposition of Trillanes. Afterwards, Trillanes was also given equal time to file a rejoinder to the DOJ’s reply.

Both rebellion and coup charges against Trillanes were dismissed in 2011.

It was Alameda who handled the 2007 Manila Peninsula-related rebellion charges against Trillanes. In September 2011, Alameda also dismissed the charges due to the amnesty granted to the senator by then-president Benigno Aquino III.

Critical to Alameda was the question of rebellion. Rebellion has been held by different Supreme Court decisions to be a continuing crime. In a continuing crime, “authorities may resort to warrantless arrests of persons suspected of rebellion, as provided under Section 5, Rule 113 of the Rules of Court.” – Rappler.com