Schools slam military for linking them to Red October plot 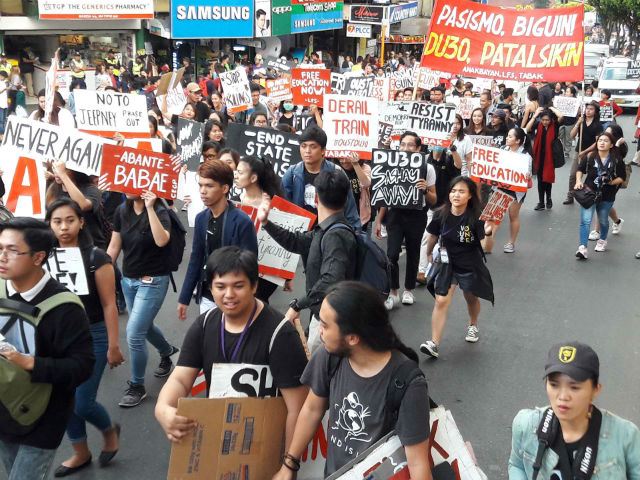 MANILA, Philippines (2nd UPDATE) – Students, professors, and school officials slammed the Armed Forces of the Philippines (AFP) on October 4, Thursday, for its “baseless and dangerous” accusation that their universities had supposedly been penetrated by communist insurgents.

The AFP has alleged that students from at least 10 universities have been recruited to take part in a supposed Red October plot to oust President Rodrigo Duterte. It’s an act that can land them in prison on sedition and rebellion charges.

In response, members of the universities called out the AFP for putting students in harm’s way and effectively endangering their lives – a position shared by the Commission on Human Rights.

University of the Philippines (UP)

In a text message to Rappler, UP vice president for public affairs Jose Dailsay said the AFP’s claims were nothing new, considering the university has had to deal with such accusations for almost 70 years since Martial Law. He added the school was not aware of efforts to recruit students for any destabilization plot.

“While it is true that UP has been a breeding ground for activism, it also graduated Presidents Roxas, Qurino, Macapagal, Marcos, and Arroyo, among other national leaders…. UP treasures and will defend its right to academic freedom, which is requisite to a functioning democracy,” he said.

In a statement posted on Twitter, the university’s All UP Academic Employees Union (AUPAEU) secretary general Sharon Pangilinan said: “The AFP have a green light for illegal surveillance, harassment, and intimidation of individuals and organizations that are critical of the Duterte administration’s policies and programs.” (READ: Anti-terrorism law weak, Senate wants longer surveillance, detention of suspects)

AUPAEU president Carl Ramona said lawmakers should investigate the AFP’s use of intelligence funds and its counterinsurgency programs.

“For an institution that’s endowed with much discretionary funds, this is the intelligence report that we get – a poorly-written research that will not even pass for a basic college essay…. It’s a total waste of government resources! AFP’s limitless funds for fictional writing and storytelling could have been spent on actual learning of Filipino students,” he said.

{source} <blockquote class=”twitter-tweet” data-lang=”en”><p lang=”en” dir=”ltr”>Official Statement of the All UP Academic Employees Union on the news that the Armed Forces of the Philippines tagged 18 schools (which included UP Manila) as recruitment areas of the CPP-NPA. <a href=”https://t.co/rzZjwHsiXT”>pic.twitter.com/rzZjwHsiXT</a></p>&mdash; UP MANILA (Official) (@UPManilaOnline) <a href=”https://twitter.com/UPManilaOnline/status/1047711917337239552?ref_src=twsrc%5Etfw”>October 4, 2018</a></blockquote>
<script async src=”https://platform.twitter.com/widgets.js” charset=”utf-8″></script> {/source}

In addition to this, the UP Diliman Student Council said: “This act of red-tagging is an attack against the youth and the student movement…. The unlawful harassment and the clearly baseless allegations of the AFP coupled with the recent order of Duterte to ‘neutralize the CPP’ is undeniably a great threat to the safety of those labeled as members of such group.”

Officials from several universities also denied the military’s claims. They maintained schools were committed to protecting and upholding the rights of Filipinos, not organizing activities to oust the President.

ADMU president Father Jose Villarin hit AFP’s claims, saying “there was no present evidence to even suggest that the Ateneo is exposed to any grave risk in that regard.”

In a statement posted on Twitter Thursday night, October 4, Villarin added the university remained committed to its “long-standing support for democratic institutions,” which may sometimes call for “independent assessments” and critique of the state of governance.

In an official statement posted on Facebook, the FEU said it was “fully committed to nation-building” and did not promote “any on-campus movement to destabilize the government.”

The University of Makati said that, as an academic institution, it “did not participate in any partisan politics” but instead focused on making young Filipinos “productive members of society.”

University president Tomas Lopez added that while the school is committed to protect students’ rights to free speech and assembly, “we also strongly adhere to the principles of democracy as enshrined in our Constitution.”

Polytechnic University of the Philippines (PUP)

“This lame attempt by the military at fearmongering and Red-tagging is not new and very Marcosian to the core,” PUP school publication The Catalyst said.

In a statement sent to UST school publication The Varsitarian, UST Simbahayan community development office director Mark Abenir also said there was “nothing wrong” with the university’s stand against Martial Law.

“The university is firm in seeing this (Martial Law) as one of the major atrocities in our history. I do not understand why they are red-tagging the University for standing up for human rights and standing up against the return of any form of dictatorial rule,” he said.

Adding to this, UST secretary general Father Jesus Miranda dared the AFP to prove its claims. “Baka naman (Maybe) [they are] stereotyping or because we are a Catholic university and there is a perception that we are against the present government, ganoon ba ‘yon (Is that how it works)?” he said.

Student organizations likewise called on the government to instead focus on solutions that would benefit the country instead of feeding into “paranoia.”

After alleging universities were infiltrated by communist insurgents, the military said on Thursday, October 4, that the list had not been fully verified. Still, it stood by its accusation. (Albayalde asks: Why do state university students ‘go against’ government?)

“We are firm in our position that some of the schools in that list have been, and widely known to have been, used as fora for communist recruitment,” they said.

The Comission on Human Rights said the “blanket act of red-tagging” students impinged on students’ rights. – with reports from Raisa Serafica and Samantha Bagayas/Rappler.com