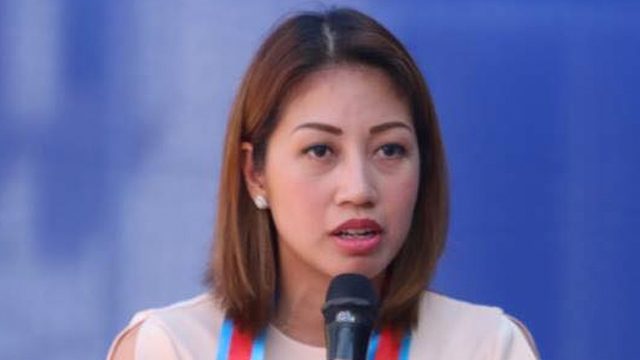 Facebook Twitter Copy URL
Copied
'We believe that the public deserve no less than upstanding public officials and not people who make a mockery of our government,' says Pinoy Aksyon for Governance and Environment in its complaint against MATA Representative Tricia Velasco Catera

MANILA, Philippines – Ang Mata’y Alagaan Representative Tricia Velasco Catera is facing an ethics complaint for allegedly having “gluta drip” sessions inside her office at the House of Representatives.

The group Pinoy Aksyon for Governance and Environment (Page) filed the complaint against Catera before the House committee on ethics and privileges on Wednesday, October 3.

Page is calling out Catera for publicizing her “highly unethical activities” of having her glutathione and vitamin drip sessions done by a certain Dr Bryan Buenaventura inside  her office at the House of Representatives.

“[She should be investigated for] her effort to publicize on several occasions her obviously personal activities such as gluta drip sessions done in her office at the premises of the House of Representatives no less, and during the official time when she should be in the performance of official functions,” said Page.

A gluta drip is a skincare procedure wherein an infusion of glutathione, collagen, and vitamin C is administered through an intravenous drip. Health authorities have warned against the potential health risks of overusing glutathione, a chemical used for treatment of cancer and other illnesses.

Page also said it is “questionable” if the said practice is safe or legal under the code of ethics for doctors. It also questioned the propriety of having it done inside her office.

“One’s office cannot be considered a medical clinic. We do not want to even consider the dire consequences if something untoward happens to Rep Catera in the very premises of the  House of Representatives due to such unregulated practice of medicine,” Page said.

The group added that because Catera is a vice chairperson of the House committee on health, “more is expected of her in this regard and she could not be seen as promoting medical practices that may very well endanger the lives and welfare of Filipinos.”

“We believe that the public deserve no less than upstanding public officials and not people who make a mockery of our government,” said Page.

Rappler later sought Catera for comment but she has yet to respond.

Apart from Catera, another party-list lawmaker, ACTS-OFW Representative John Bertiz, is facing an ethics complaint. Bertiz has been under fire over a video of his controversial confrontation with an airport security checker, among other controversies.

No public hearing has been set for the ethics complaints against Bertiz and Catera. – Rappler.com