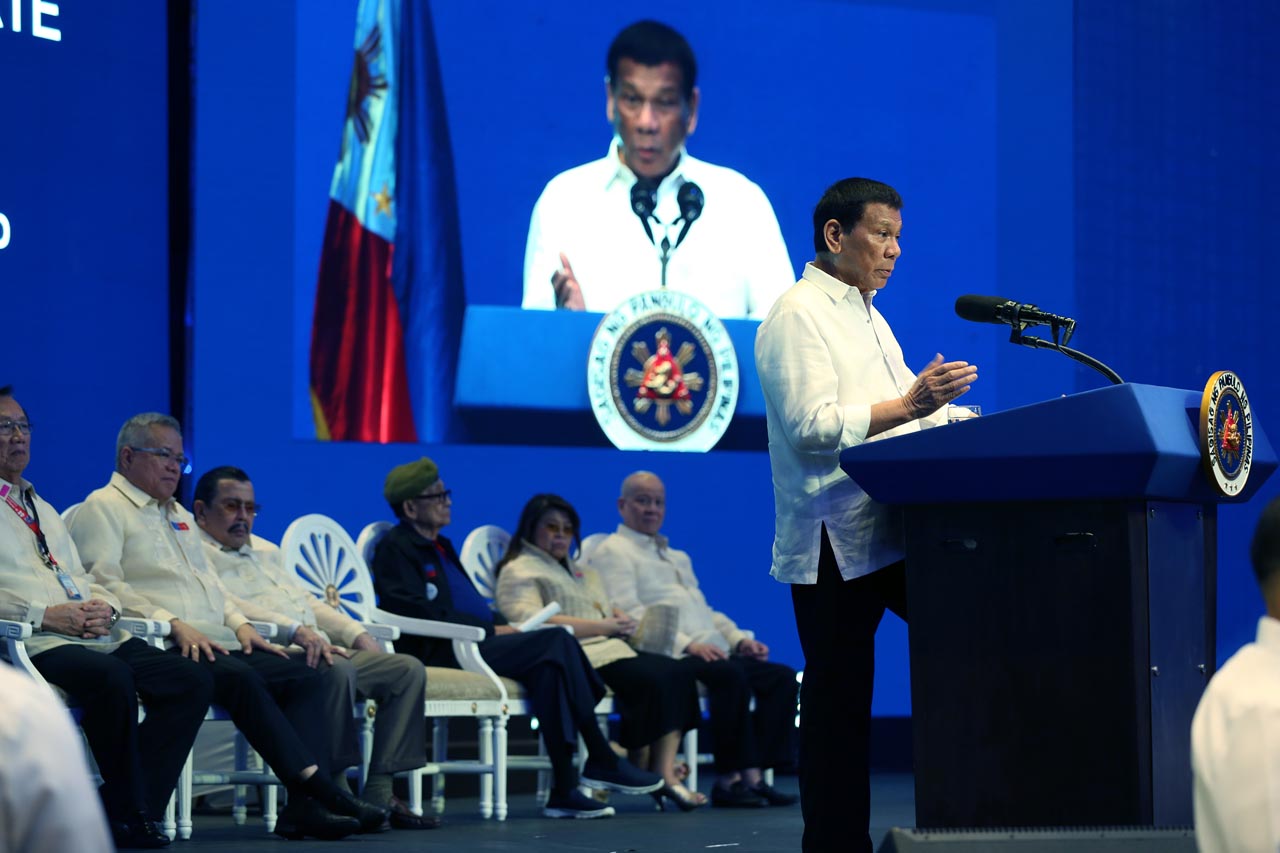 MANILA, Philippines – It was President Rodrigo Duterte himself who acted on the complaint of the South Korean firm that was awarded the contract to build two warships for the Philippine Navy.

Duterte admitted handing the complaint of the firm, Hyundai Heavy Industries (HHI), to his aide Bong Go so that Go could refer it to Malacañang lawyers.

“There was this Korean who represented this – yung nagpabili sir – and he was complaining why there has yet no order to deliver na nanalo sila. So, yung letter niya ibinigay ko kay Bong, ‘give it to legal,'” said Duterte on Thursday, October 18, during a speech at the 44th Philippine Business Conference and Expo in Manila.

(There was this Korean who represented this – the one who was selling – and he was complaining why there has yet no order to deliver when they won [the bidding]. So I gave his letter to Bong.)

The lawyers then referred the complaint to Defense Secretary Delfin Lorenzana, said the President.

“So legal referred it to Lorenzana. So ang nagsulat si Lorenzana (The one who wrote was Lorenzana),” he said.

This is the first explicit admission of Duterte of his involvement in how Malacañang handled HHI’s complaint. (READ: DOCUMENTS: How Bong Go is linked thrice to frigates deal)

Controversy over the frigates deal erupted after former Philippine Navy chief Vice Admiral Ronald Mercado was unceremoniously ousted in December 19, 2017 for alleged “insubordination” over the implemention of the project. Mercado had supported a technical working group’s finding that declared that the maker chosen by HHI failed to meet the Navy’s technical requirements. (READ: TIMELINE: PH Navy’s P15.7-B frigates acquisition project)

When the story broke in January 2018 about Go’s move to fast-track the process, and during a subsequent Senate hearing on it, Go’s former undersecretary Lloyd Christopher Lao and Go himself said the HHI complaint was sent to Malacañang because of Duterte’s general call for private citizens to send their complaints on corruption to the Palace.

Go said his office’s action on the complaint was a “mere notary endorsement which is one of the thousands of complaints we endorsed as part of PRRD’s (President Rodrigo Roa Duterte’s) agenda to open the gates and ears of Malacañang to complaints against public officials and against the bureaucracy.”

But not all complaints are acted upon by the President himself.

Thousands of complaints actually don’t reach Duterte himself as they are usually handled by the 8888 Hotline and Complaint Center under the Office of the Cabinet Secretary or other Malacañang offices.

Go had initially denied he intervened in the frigates project.

He and Duterte accused Rappler and the Inquirer of publishing “fake news” when the outlets wrote articles about Go’s intervention or special interest in the project.

In a Senate hearing on the issue, however, Go himself admitted his office “endorsed” HHI’s complaint.

Duterte uses frigate issue as segue to Go endorsement. As is typical in many of his speeches when he brings up the frigates controversy, Duterte used the topic to express support for Go’s Senate bid.

He said the Senate hearings on the frigate controversy was the perfect platform for Go to gain nationwide attention so he could run for senator. (READ: Cabinet in full force at Senate probe to support Bong Go)

(So everyone was called, Bong was called. I said, ‘You go, Bong.’ The senators suggested holding an executive session…I said, ‘No, no, no. You demand a full proceeding in public.’ Now look, Bong Go is a senator.)

“He will win. He will win. Kita mo (You see). Nakita mo (See) how fate play – destiny of men are played,” added Duterte.

Background on HHI, frigate project. HHI is the Korean firm that won the bid for a P15.5-billion contract to build two frigates or warships for the Philippine Navy.

The frigates project is one of the big-ticket modernization projects initiated and practically completed during the administration of Benigno Aquino III, and finalized and signed in the early months of the Duterte administration.

But it encountered delays during the Duterte presidency because of a disagreement on the secondary supplier for a critical component of the warships – the Combat Management System.

Under the contract, the HHI will also acquire several systems – based on the technical requirements of the Philippine Navy – from secondary suppliers to install in these ships.

HHI chose a company called Hanwha, but the former Philippine Navy chief Vice Admiral Ronald Mercado, rejected the choice citing a finding of the Navy’s Technical Working Group that it didn’t meet the technical specifications provided in the contract.

The DND claimed otherwise, insisting HHI has the right to choose the secondary supplier.

HHI had apparently reached out to Duterte because they were concerned about the delay.

In April this year, the Navy approved the design drawings for the warships. – Rappler.com