Soldiers in Customs? But Constitution bars civilian assignments for military 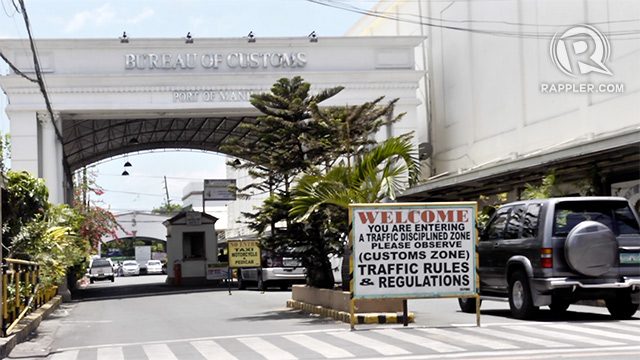 Facebook Twitter Copy URL
Copied
Section 5(4), Article XVI specifically says no member of the armed forces shall, at any time, be appointed or designated in any capacity to a civilian position

MANILA, Philippines – President Rodrigo Duterte had announced plans of a military takeover at the Bureau of Customs (BOC), despite a provision in the Constitution that specifically says soldiers cannot be given civilian assignments in government.

Section 5(4), Article XVI of the 1987 Constitution says: “No member of the armed forces in the active service shall, at any time, be appointed or designated in any capacity to a civilian position in the Government including government-owned or controlled corporations or any of their subsidiaries.”

Presidential Spokesman and Chief Presidential Legal Counsel Salvador Panelo said on Monday, October 29, that they expect the military to take only one week to “learn the ropes of the game in Customs.”

The move is part of an attempt to solve the smuggling problem in Customs, following the succession of scandals involving the entry into Philippine ports of shabu (methamphetamine).

Duterte had earlier appointed retired general Rey Guerrero, former Armed Forces of the Phililppines (AFP) chief of staff, as the new chief of the BOC. (READ: At the Bureau of Customs: How Isidro Lapeña was outplayed)

Defending the move of Malacañang, Justice Secretary Menardo Guevarra said members of the military will be at the BOC temporarily.

“But they will only be detailed or seconded for a limited period of time, not appointed or designated,” Guevarra said.

Malacañang has not released any written order yet. If Guevarra’s reasoning is to be followed, we pointed out to him that the formal document should not mention the words “appoint or designate.”

Wording of the Constitution

We also pointed out that the Constitutional provision says no member of the armed forces shall be appointed to a civilian position “at any time” and “in any capacity.” Does the provision cover those who will be detailed even on a temporary basis?

“The temporary detail/secondment orders will be issued by the relevant AFP/BOC units, not by the Office of the President. Details and secondments do not involve any new designations or appointments, so ‘any time’ is irrelevant. ‘In any capacity’ is also irrelevant for the same reason,” Guevarra said.

Asked which office would release the order, and if the President would sign it, Guevarra pointed to Panelo for further questions on implementation.

Guevarra earlier reasoned that because Guerrero is now a civilian, the takeover does not violate the rule on civilian supremacy.

“Certainly not, because the BOC chief is a civilian; the BOC is under the Department of Finance (DOF); and the DOF is under the President,” said the justice secretary.

Guevarra invoked Article VII, Section 17 of the Constitution which says the President controls all executive departments – such as the BOC – and mandates him to “ensure that the laws be faithfully executed.”

“Putting the Bureau of Customs under the watchful eye of the AFP is a temporary measure to ensure that massive entry of illegal drugs, which threatens public safety, is immediately stopped. The bureau is headed by retired General Rey Guerrero, who is now a civilian,” Guevarra said.

Another provision in the Constitution, Article VII, Section 18 says, “The President shall be the Commander-in-Chief of all armed forces of the Philippines and whenever it becomes necessary, he may call out such armed forces to prevent or suppress lawless violence, invasion or rebellion….”

But even given this provision, “lawless violence, invasion or rebellion” is non-existent in the Customs bureau to justify calling out the armed forces. – Rappler.com