De Lima runs to Ombudsman: DOJ use of convicts as witnesses ‘illegal’ 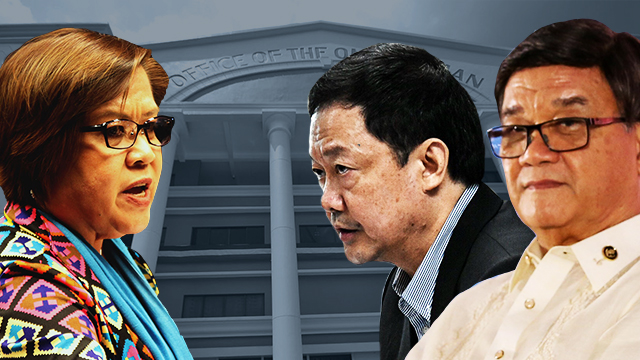 MANILA, Philippines – Detained Senator Leila de Lima ran to the Office of the Ombudsman to file a complaint against former justice secretary Vitaliano Aguirre II and his successor, Secretary Menardo Guevarra, for using convicts as state witnesses in the drug case against her.

De Lima filed the complaint before the Ombudsman on October 29, accusing Aguirre and Guevarra of violation of both the Witness Protection Program (WPP) and the anti-graft law.

Muntinlupa City Regional Trial Court (RTC) Branch 206, handling one of the 3 counts of conspiracy to commit illegal drug trading against De Lima, had approved the testimony of the convicts against the senator. But Branch 206 Judge Lorna Navarro Domingo inhibited from the case on Monday, November 5.

In her complaint, De Lima alleged that the acts of Aguirre and Guevarra violated Section 10(f) of the WPP law which says a state witness should not have been “at any time been convicted of any crime involving moral turpitude.” (READ: Inside Bilibid: Resurgence, resignation, ‘recanting’)

In past rulings, the Supreme Court defined a crime involving moral turpitude as “an act of baseness, vileness, or depravity in the private duties which a man owes his fellow men, or to society in general, contrary to the accepted and customary rule of right and duty between man and woman, or conduct contrary to justice, honesty, modesty, or good morals.”

The 13 convicts who were turned state witnesses against De Lima were convicted of crimes involving drugs, murder, homicide, kidnapping, and robbery; and were sentenced to 30 to 40 years in prison.

De Lima also alleged that Aguirre and Guevarra committed graft, specifically Section 3(e) of Republic Act No. 3019 or the Anti-Graft and Corrupt Practices Act which prohibits public officials from giving unwarranted benefits to a private party.

De Lima had always gone after Aguirre in this aspect, filing an earlier complaint before the Ombudsman against the resigned justice secretary.

It was Aguirre who admitted the convicts into the WPP of the Department of Justice (DOJ). De Lima said Guevarra denied her camp access to the documents on the convicts’ protection grants which, for the senator, showed partiality and bad faith on the part of Guevarra.

“It is unfathomable how then Secretary Aguirre and Secretary Guevarra could have missed the fact that the convicted felons are not qualified to become state witnesses,” said De Lima.

The senator alleged that by continuing to give state protection to the convicts, which includes their immunity from the same drug cases, Guevarra is violating Article 208 of the Revised Penal Code, which penalizes officials “who, in dereliction of the duties of his office, shall maliciously refrain from instituting prosecution for the punishment of violators of the law, or shall tolerate the commission of offenses.”

“The failure to file the necessary information is a flagrant breach of duty on the part of the Secretary. Ultimately, he has committed gross neglect of duty as the Secretary of Justice,” De Lima said in her complaint.

In De Lima’s pending complaint against Aguirre, she accused him of supposedly coercing DOJ employees to turn against the senator.

In response to De Lima’s complaint, Guevarra said he would have to read the document first before making any comment “as I only came on board last April.”

De Lima has been in jail for one year and 9 months, or since her arrest in February 2017. Her cases have yet to go on trial, with a total of 4 judges inhibiting from the case, and one judge going on early retirement. – Rappler.com