Panelo on Michael Yang’s work as adviser: ‘That’s between him and the President’ 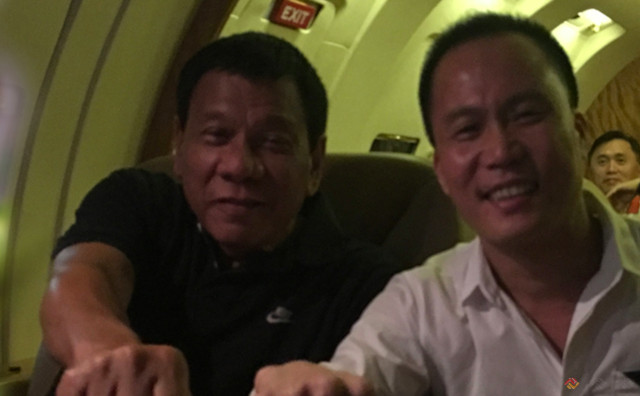 MANILA, Philippines – Malacañang on Tuesday, November 6, refused to elaborate on the nature of the services that Chinese national Michael Yang provides to the Philippine government as an “economic adviser to the President.”

In a Palace news briefing on Tuesday, Presidential Spokesperson Salvador Panelo referred to Yang as a “consultant” and “economic adviser” who Duterte consults “every now and then,” but he declined to give other details.

Panelo did not dispute the authenticity of Malacañang-issued contracts between Yang and Palace officials reported by Rappler on Monday, November 5.

Asked if Malacañang issued an “appointment” for Yang, the spokesman said, “It appears from the documents that I saw signed by Secretary Guevarra and Secretary Medialdea.”

At the time of Yang’s appointment, Justice Secretary Menardo Guevarra was senior deputy executive secretary in the Office of the President (OP).

Panelo said the documents he was referring to were those he had seen in the Rappler report.

But the two contracts for “Expert and/or Technical Services” do not state the expertise of Yang to be tapped by the OP. Asked to disclose some details, Panelo refused.

“I think that’s between the President and the economic adviser. You cannot be revealing those things,” he said.

He gave the same response when asked what sensitive state information Yang may have access to, and if the Philippine government had a system to screen information that should not be disclosed to foreigners.

Asked to name instances when Yang’s expertise benefited the Philippine government, Panelo again said, “That’s between him and the President.”

But Panelo said a clue to Yang’s services to the government could be gleaned from his rise from “poor origins” to great wealth.

“He has the technical know-how to run a business and also because he is Chinese, he knows a lot of people in the Chinese government and he knows the psychology of the Chinese. On that aspect, the President needs people like him,” said Duterte’s spokesman.

He also sought to downplay Yang’s influence on Philippine foreign policy and other government policies.

“One economic adviser cannot create policies. It’s the President who creates policies,” said Panelo, when asked how the Palace can assure Filipinos that Yang’s role does not unduly influence policies to the advantage of foreign interests.

Panelo also said Duterte was aware of the contracts made with Yang, even if they were signed by Executive Secretary Salvador Medialdea and Guevarra.

“Of course it’s with his knowledge,” he said.

Reporters also zeroed in on the contradiction between the contracts showing Yang served as economic adviser and Duterte’s denial that the Chinese citizen was ever his adviser on economic affairs.

Panelo said Duterte did not lie. He even contested what official Malacañang transcripts showed – that a month ago, the President denied Yang was his economic adviser.

Reporters at the briefing showed Panelo the part of the transcript where Duterte said, “Cannot be, he is a Chinese,” in response to a reporter’s question about Yang’s supposed role as presidential adviser.

But Panelo pointed to Duterte’s sentence after this phrase where he said: “Adviser ‘yan siya na (He is an adviser at)…. Even when the Premier of China was here, he was part of the entourage.”

Panelo claimed Duterte had been identifying Yang as his economic adviser, despite the phrase’s vagueness.

The spokesman said tapping Yang as consultant was “allowed.”

However, Philippine laws impose requirements on the hiring of foreign consultants by government agencies.

The Government Procurement Reform Act, for instance, requires a public bidding. In extraordinary circumstances this can be waived, but only upon the approval of the Bids and Awards Committee. There also has to be proof that the foreign consultant’s services cannot be provided by a local consultant. – Rappler.com