MANILA, Philippines – “No convicted person has been used as a state witness under Rule 119 against Senator Leila de Lima,” Justice Secretary Menardo Guevarra declared, responding to the complaint that De Lima filed against him at the Office of the Ombudsman.

On the surface, Guevarra’s statement is puzzling. The entire nation watched as convicts like Herbert Colanggo testified in a sensational House of Representatives probe against De Lima. That was in September 2016; fast forward to 2018 and the Muntinlupa Regional Trial Court (RTC) has started scheduling hearings inside the New Bilibid Prison (NBP) for the convicts’ testimonies.

There is no dispute – convicts are witnesses against De Lima.

But technicality protects the DOJ in this aspect. Guevarra makes a clear distinction in his statement – they are not state witnesses “under Rule 119.”

De Lima is citing Section 10 of the WPP law which says that a state witness must not have been “at any time convicted of any crime involving moral turpitude.” The 13 convicts who were turned witnesses against De Lima were convicted of crimes involving drugs, murder, homicide, kidnapping, and robbery, crimes that De Lima says involve moral turpitude.

Under Section 17, Rule 119 of the Rules of Court, the law that Guevarra is citing, a state witness is a person “charged with the commission of any offense.”

The law adds that “upon motion of the prosecution before resting its case, the court may direct one or more of the accused to be discharged with their consent so that they may be a witness for the state.”

The problem is, the convicts were never charged with De Lima for the 3 counts of conspiracy to engage in an illegal drug trade. When the DOJ under Aguirre indicted De Lima in February 2017, the justice department dismissed complaints against the convicts “since they will be utilized as prosecution witnesses.”

That’s what Guevarra means. Under Rule 119, the convicts were never charged, therefore they cannot be considered as state witnesses.

Unfortunately for De Lima, Guevarra has the court on his side.

In a September 24, 2018 order by Muntinlupa RTC Branch 206 Judge Lorna Navarro Domingo, the court said “the witnesses are not accused in this case, so there is no need for this Court to discharge them as accused as alleged by the defense since under Section 18 of Rule 119, the discharge of the accused operates as acquittal.”

Section 18 provides that if a state witness is discharged under Section 17, they must be acquitted.

Domingo inhibited from the case on Monday, November 5, making her the 4th judge to inhibit from this controversial case that jailed the fiercest critic of President Rodrigo Duterte.

But the fact remains that the convicts were immune from suit.

The DOJ’s own charge sheets state that the convicts “wilfully and unlawfully traded and trafficked dangerous drugs” supposedly to finance De Lima’s senatorial run in 2016, yet they were not charged.

“Rule 119 contemplates a situation where the person was charged and later discharged; I think the DOJ knew from the start they weren’t charging them,” said law professor Ted Te.

According to Te, Guevarra is “technically right” and so De Lima “technically cannot” use Section 10 of the WPP law.

“That’s really the style of DOJ ever since; it’s not new,” said Te.

De Lima also claims aside from immunity, state resources are being used to provide the convicts protection. The convicts were admitted to the WPP by Aguirre during the House probes, but Guevarra does not want to confirm if they are still under the WPP now.

Guevarra told De Lima to get a court order if she really wants to know. 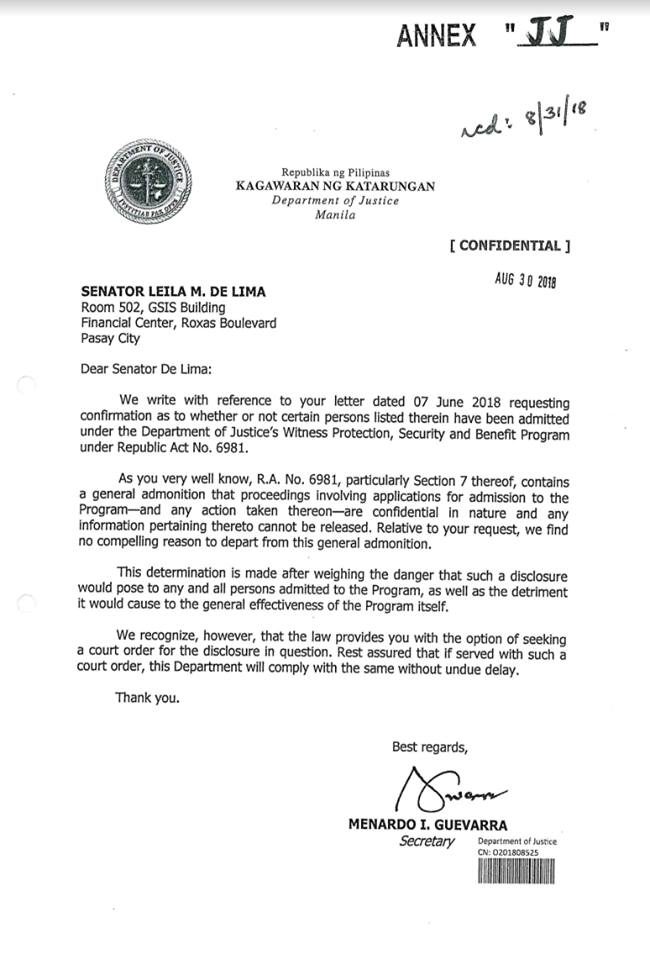 De Lima, once a secretary of justice herself, called this “prosecutorial misconduct.”

(If they are ordinary witnesses, they should not enjoy immunity, so why did the DOJ not charge them when it’s clear they admitted their roles in the Bilibid drug trade? This is more than prosecutorial misconduct!) – Rappler.com