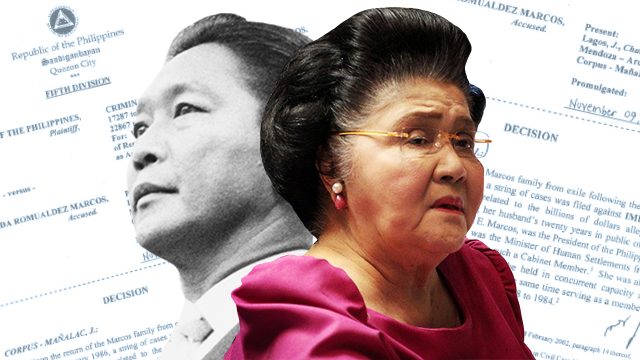 Facebook Twitter Copy URL
Copied
As discovered by the government from both foreign and local sources, and documents that the Marcoses left behind, they put up foundations for their own 'private benefit'

MANILA, Philippines – It took 26 years to decide the corruption cases of former first lady Imelda Marcos, and the guilty verdict of the anti-graft court Sandiganbayan handed down Friday, November 9, gives a clear picture of the “entrepreneurial” scheme of the former first family.

The Sandiganbayan 5th Division convicted Imelda Marcos of 7 counts of graft for creating and maintaining private foundations in Switzerland, violating the anti-graft law that prohibits public officials from having pecuniary interests in private businesses.

Imelda was minister of human settlements, governor of Metro Manila, and member of the interim Congress at the time the crimes were committed, which was from 1968 to 1986.

As discovered by the government from both foreign and local sources, as well as documents that the Marcoses left in Malacañang when the family went in exile in 1986, the Marcoses put up the foundations for their own “private benefit.”

“The purpose of setting up these entities is definitely not charitable, educational, religious or otherwise in service of public interests,” said the 70-page decision of the 5th Division penned by Associate Justice Maryann Corpus-Mañalac, with concurrences from Associate Justices Rafael Lagos and Maria Theresa Mendoza-Arcega.

“Though named as a foundation, the evidence shows that these entities were put up primarily for the entrepreneurial activity of opening bank accounts and deposits, transferring funds, earning interests and even profit from investment, for the private benefit of the Marcos family as beneficiaries,” said the decision.

Lead prosecutor Rey Quilala said that they estimate the Marcoses’ earnings to be at US$200 million or P10.6 billion in today’s exchange rate. The question of whether the government can recover that money still hangs in the air, as it takes a separate forfeiture suit to do that.

The scheme they used is what Ombudsman prosecutors described as “a schematic plan or complex pattern of cover-up.”

For example, in the creation of the Maler Foundation, Imelda and Ferdinand created it but appointed Andre Barbey and Jean Louis Suiner as attorneys, administrators, and managers of the foundation. Imelda then conducted business to get investments amounting to at least US$75 million.

The investments then earned profits. Other investments included US dollar-denominated notes issue of the Philippines. “Ms Marcos’ interests in the treasury notes investments is shown by her act of directly monitoring its progress,” said the decision.

The same scheme was used for the other 6 Swiss foundations.

Loan from the Central Bank

Imelda was originally charged with 10 counts of graft, but she was acquitted on 3 counts involving local corporations. The decision shows that another foundation loaned money from the Philippine Central Bank, but there was insufficient evidence to prove that Imelda was directly involved with the said foundation.

The perpetrator, it turned out, was her husband, the late president Ferdinand Marcos.

In one case where Imelda was acquitted, ARCI foundation applied for a US$25 million loan with the Central Bank of the Philippines “guaranteed by Philguarantee by recommending approval of ARCI’s applied loan, through her letter to Mr Jaime Laya, then Central Bank governor.”

But a “review of evidence points not to Ms Marcos, but to her husband Mr Marcos, who personally participated in the management, control and direction of the affairs of ARCI. Criminal responsibility being personal to the perpetrator thereof, the same cannot be attributed by implication to Ms Marcos,” the decision said.

(This is still a victory because with the local companies, we presented former prime minister Cesar Virata and according to his testimony, he cannot directly pinpoint the participation of the [former] first lady, so it doesn’t hurt us much.)

Quilala said that for years, the Marcoses just changed the names of the foundations and transferred assets, giving prosecutors a clear money flow.

Indeed in the decision, it was proven that for instance in the Charis Foundation, it was changed to Scolari Foundation with the same people being constituted as members of the Board.

Prosecutors wanted to prove that these foundations were used as conduit for ill-gotten wealth.

The decision has the tenor of agreeing with the prosecutors insofar as saying that the end goal of the foundations was not charitable but for the “private benefit of the Marcoses and their beneficiaries.”

However, in the crimes of graft, Imelda is mainly convicted for having the prohibited pecuniary interest in the foundations.

“Ms Marcos participated in the management thereof, by exercising control over their assets and the disposal thereof, appointing the persons to represent these foundations, transmitting instructions and ratifying the decisions and circumstances of these persons, all heard towards a particular objective,” said the decision.

Neither Imelda nor her lawyers attended the promulgation of the decision. She has been ordered to explain to the Court within 30 days why she did not show up. The 5th Division has also ordered her arrest, though a warrant was yet to be issued at 4:30 pm on Friday, which is closing time for the Sandiganbayan.

Earlier, Quilala and the 5th Division said Imelda can have provisional liberty while she appeals her conviction. She was meted the sentence of 6 years to 11 years in prison for each count.

“Notably, when confronted with these allegations and evidence, Ms Marcos chose to remain silent and did not even testify. This is contrary to the actuation of an innocent person who normally would stand and rise up to his defense when challenged by incriminating assertions as in these cases,” said the Court.