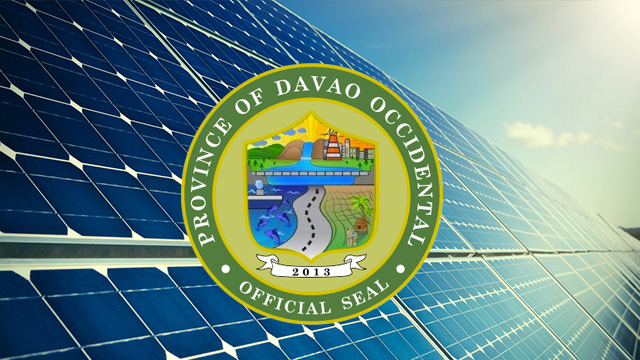 DAVAO CITY, Philippines – At least 100 homes in two Davao Occidental communities are now enjoying electricity, thanks to a European Union project that aims to provide power to off-grid communities through the use of solar technology.

Enrico Strampelli, head of the EU Development Cooperation, said during the switch-on ceremony in Digos City in Davao del Sur on Thursday, November 8, that energizing sitios New Mabuhay in Malita and Mahayag in Don Marcelino, both in Davao Occidental, is part of the EU’s €60-million (P3.6-billion) Access to Sustainable Energy Programme (ASEP) for remote communities in the Philippines.

Strampelli said the program highlights the productive use of renewable energy to boost income generation in the recipient rural communities.

This demonstrated additional economic opportunities through renewable energy, he said.

Davao Occidental Governor Claude Bautista said the project spelled a lot of difference in the lives of the recipient residents.

For example, he said New Mabuhay in Barangay Little Baguio in Malita was so remote that the local power cooperative had difficulty putting up power lines there. The lack of power, he said, had stalled economic development in the area.

The installation of the solar power system was hoped to improve the lives of the recipient communities, he added.

Energy Undersecretary Felix William Fuentebella said residents of the two communities were only among the 100,000 households in Mindanao and Bohol in the Visayas that the EU and the national government had planned to energize through the off-grid technology using photovoltaic power.

Fuentebella said the program aimed to install solar home systems, each with a 50-watt peak capacity, in recipient homes.

“Rest assured, the DOE and our partners-stakeholders will continue to explore more projects that will benefit our brothers and sisters in remote areas through innovative solutions,” he said.

In a statement, Energy Undersecretary Jesus Cristino Posadas said “there is a close correlation between energy, particularly electricity, and social and economic development as being energy-poor is poverty-bound.”

“Most of the poorest of the poor are located in remote and far-flung areas which are not connected to the main grids of Luzon, Visayas, and Mindanao – the so-called off-grid areas,” he said.

“Energizing these power-poor areas will enable economic and social activities to be started and be sustained there,” Posadas added.

He said in off-grid areas, residents had to resort to the use of expensive energy sources just to keep things going, such as diesel generators. (READ: How practical is solar power for PH home owners?)