No more criminal case vs Imelda at Sandiganbayan; 1 civil case near decision 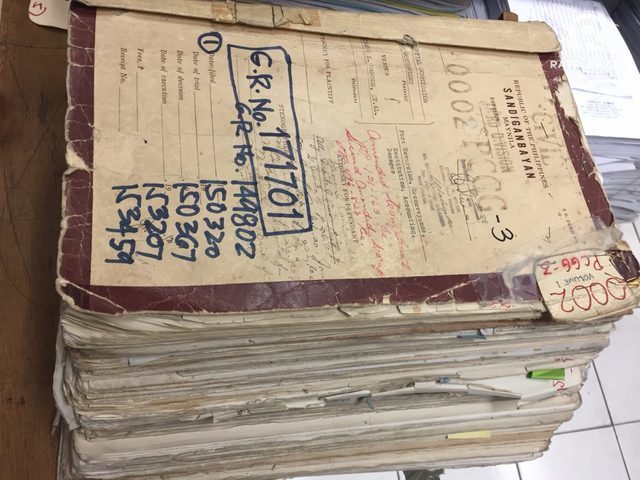 MANILA, Philippines (3rd UPDATE) – Ilocos Norte 2nd District Representative Imelda Marcos’ recent conviction for 7 counts of graft concludes her criminal battle at the anti-graft court Sandiganbayan, but there remain 22 civil cases against the Marcoses and cronies with one up for decision.

According to the updated list of the Sandiganbayan’s docket section, Imelda was charged for 28 criminal cases at the anti-graft court. She was convicted for two counts of graft in 1993 over anomalous contracts involving a lease between the Light Rail Transit Authority and the Philippine General Hospital Foundation Inc. But in 1998, the Supreme Court acquitted her.

Her 2nd conviction was the one handed down on Friday, November 9, for 7 counts of graft for illegally creating and maintaining private organizations in Switzerland while she held various government positions during the 20-year rule of her husband, the late dictator Ferdinand Marcos. (READ: Imee, Bongbong Marcos were beneficiaries of illegal Swiss foundations)

A total of 19 criminal cases against her have been dismissed by the Sandiganbayan throughout the years.

One civil case near decision

As for the civil forfeiture cases, there remain 23 pending cases seeking to forfeit alleged ill-gotten wealth from the Marcoses and their cronies, with one nearing decision.

There used to be 43 civil cases but 19 have been dismissed, while one was archived.

In Civil Case No. 0002 filed in 1987, and amended in 1990, the Presidential  Commission on Good Government (PCGG) seeks to recover an estimated P200 billion* (US$3.8 billion) in ill-gotten wealth computed from the wealth that exceeded their lawful income as public officials.

“Defendants illegally accumulated funds and other property whose estimated value is P200 billion in violation of the laws of the Philippines and in breach of their official functions and fiduciary obligations,” said the PCGG.

The Sandiganbayan 4th Division said both the Marcoses and the PCGG have submitted their memoranda, or the summary of their evidence, which means it has been submitted for decision. (READ: Imelda Saga: Will she go to jail or not?)

Civil Case No. 0002 was filed against spouses Ferdinand and Imelda Marcos, their children Imee, Ferdinand Jr or Bongbong, and Irene; and Gregorio Ma. Araneta and Tomas Manotoc. The Court said on Monday, November 12, that Araneta and Manotoc have been dropped.

The government wants the Marcoses “to reimburse expenses for the recovery of the defendants’ ill-gotten wealth reasonably estimated at P250 million or in such amount as may be proven during the trial.”

The government also wanted to charge the Marcoses P50 billion in moral damages, P1 billion in exemplary damages and other expenses as may be proven during trial.

The PCGG alleged that this is “ill-gotten wealth consisting of funds and other property which they, in unlawful concert with one another, and with the active collaboration of third persons who are subject ion separate suits, had acquired and accumulated in flagrant breach of trust and of their fiduciary obligations as public officers, with grave abuse of right and power and in brazen violation of the Constitution and laws of the Republic of the Philippines.”

Lazaro has also filed a motion for leave of court to avail of post-conviction remedies, which was set for hearing on Friday, November 16.

*Editor’s Note: A previous version of this story said the ill-gotten wealth was estimated at P250 million (roughly $4.7 million), and the damages at P200 billion ($3.8 billion). It’s the other way around. We have corrected the error.