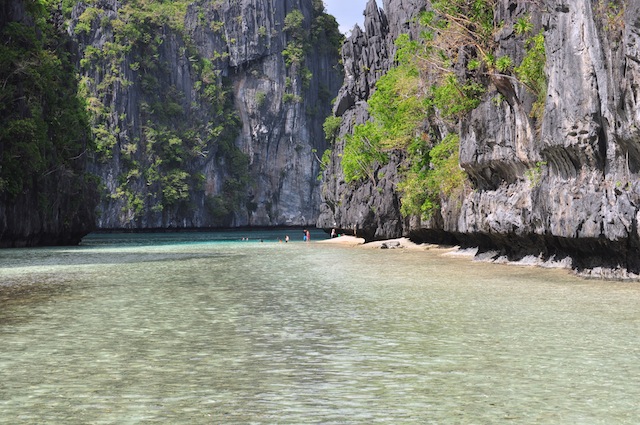 PUERTO PRINCESA, Philippines (UPDATED) – Local officials and business owners in El Nido welcomed the decision of the national government to shut down only erring establishments and not the entire town which the top Palawan destination undergoes rehabilitation.

On Wednesday, November 14, Environment Secretary Roy Cimatu, Interior Secretary Eduardo Año, and Tourism Secretary Berna Puyat-Romulo met with El NIdo officials in Manila and unanimously agreed to rehabilitate the town without temporarily closing it to the public, unlike what the government had done in Boracay.

El Nido town administrator RJ de la Calzada conveyed the decision of the Cabinet officials to tourism establishment owners in El Nido, who had earlier urged the government not to order a termporary shutdown of the town.

“We would like to thank the 3 secretaries for appreciating our efforts for the past few years in responding to various environmental concerns. And these efforts were shared with the private sector and the community,” De la Calzada said.

“With that, they have decided not to close the entire El Nido but only closing the establishments that are not complying to various government policies,” he added.

Henri Fernandez, president of the Cottages, Resorts and Restaurants Association of El Nido (CRRAEN), thanked the national government for listening to their appeal, even as he urged the remaining erring establishment owners to shape up.

“Business establishments, especially those without Protected Area Management Board endorsement, mayor’s permit and those given notice of violation by the Department of Environment and Natural Resources (DENR) should comply with all the given requirements to restore their operations,” he said.

On Tuesday, November 13, a day  the day before the Department of Environment and Natural Resources (DENR) announced that “overcrowded” El Nido would undergo rehabilitation, CRRAEN appealed against a possible temproary closure of El Nido, as  local establishments have been complying with environmental policies.

“Most of the establishments which had been found on coastal easement or occupying timberland had already moved out. We regularly dislodge our septic tanks and ensure wastewater doesn’t flow to the bay,” CCRAEN Henri Fernandez told Rappler on Tuesday.

At the time, Fernandez was responding to the statement of Año threatening to recommend the shutdown of El Nido to President Rodrigo Duterte if the town was found with major environmental law violations. (READ: DENR targets full El Nido cleanup by end-2018)

In February, DENR Mimaropa formed Task Force El Nido to address the town’s problems with the encroachment of easement zones and timberland areas; degradation of water quality in Bacuit Bay; and improper disposal of solid and liquid wastes, among others. (READ: El Nido crackdown on erring establishments begins)

Erring establishment owners were given time to comply through technical conferences facilitated by the regional Environmental Management Bureau (EMB).

De la Calzada expressed confidence that the municipal government had been doing its job of enforcing local regulations and national laws in the town, which forms part of the El Nido-Taytay Managed Resource Protected Area.

“Since the start of Mayor Nieves Rosento’s term, the LGU El Nido have increased its effort for environmental compliance. The LGU has fast-tracked the implementation of projects in line with wastewater, solid waste, easement and setback, carrying capacity and water,” De la Calzada told Rappler in a separate interview.

The result of water testing in Barangay Buena Suerte – while still high compared to DENR’s water quality guidelines/criteria under Class SB waters of 100 most probable number per 100 milliliters – has significantly decreased from 3,500 in February to 1,600 in September this year.

The EMB in Mimaropa said, however, it is still too early to tell if the changes in coliform levels are due to the task force’s cleanup efforts.

“The EMB explained that further tests and data gathering are necessary to determine the root cause of water degradation in the bay,” Adornado said in a statement Tuesday.

He said the task force will continue to conduct regular effluent monitoring, and file cases before the department’s Pollution Adjudication Board or in regular courts to ensure the establishments’ full compliance with environmental laws.

Adornado said the EMB will also undertake activities to establish Bacuit Bay as a Water Quality Management Area, based on orders of Environment Secretary Roy Cimatu to involve stakeholders in the preservation of the bay.

“With our continuous and strict monitoring, we look forward to achieving Class SB water in Bacuit Bay,” he said. – Rappler.com