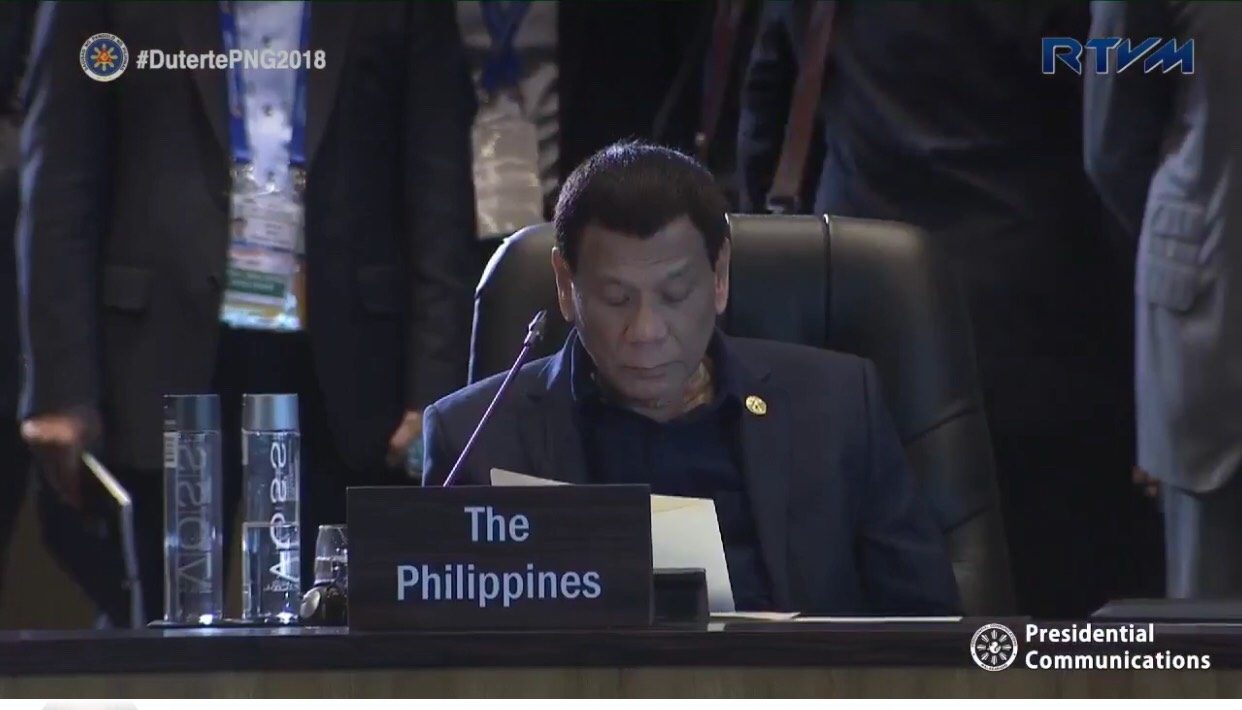 Duterte was earlier expected to arrive at the Davao International Airport at 3:15 am on Sunday.

(He’s here, he did not go home last night. He wants to attend the meeting. He will attend it, he will go home after the meeting.)

An earlier schedule sent by Malacañang to media showed Duterte was going to cut his trip short by one day, flying out Saturday night, November 17, and missing all of Sunday’s events.

With the change of plans, Duterte will be able to attend the following APEC events:

Before the APEC summit in Papua New Guinea, Duterte was in Singapore for the 33rd Association of Southeast Asian Nations (ASEAN) Summit and Related Summits, where he skipped 4 major leaders’ meetings because he took “power naps.”

The President has been criticized for his absences, with critics calling him lazy.

Although he decided to stay until Sunday, Duterte was still a no-show Saturday night at the gala dinner, sending his trade secretary instead to pose with heads of state donning bright yellow and red Papua New Guinean shirts.

Asked about the Papua New Guinea dinner, a Philippine official told Agence France-Presse that Duterte “feels constrained by formalities and finds them unproductive and a slight waste of time.”

On Twitter, Foreign Secretary Teodoro “Teddyboy” Locsin said Duterte “is apparently getting things done” at the APEC summit “like he couldn’t at the ASEAN Summit with its rigid formalities.”

Reacting to the news that Duterte had decided to stay on Sunday, Locsin said: “And there I was uselessly insisting that he stay just one day. He is apparently getting things done there like he couldn’t at the ASEAN Summit with its rigid formalities.”

Locsin added, “Next time he will be free to say what he wants and how he wants to say it just like Mahathir did.”

He was referring to 93-year-old Malaysian Prime Minister Mahathir Mohamad, the oldest head of state in the world, who delivered at the ASEAN summit a strong speech against trade protectionism. Mahathir also told the United States not to send warships to ASEAN waters, but that small patrol boats are fine as they “are needed to deal with piracy.”

On Saturday, Philippines inked an agricultural deal with Papua New Guinea, where the two countries committed to establish a model seed farm for improved rice production. – With a report from Agence France Presse/Rappler.com