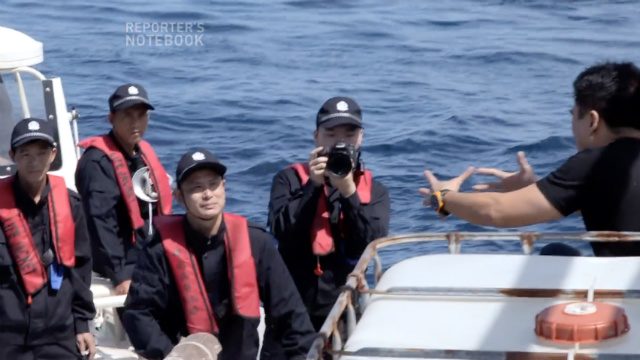 Facebook Twitter Copy URL
Copied
'Without the permission of China, you cannot carry out the interview here,' a member of the Chinese Coast Guard tells the crew of broadcast giant GMA-7

The incident transpired around noon of November 8 in Panatag Shoal (Scarborough Shoal) in the West Philippine Sea. This is despite assurances from the Duterte administration that its China-friendly policy has pacified the situation there.

“Without the permission of China, you cannot carry out the interview here,” a member of the Chinese Coast Guard told journalist Jun Veneracion of Philippine broadcast giant GMA-7.

Veneracion was shooting a documentary for their TV show Reporter’s Notebook, which is airing this episode around 11:35 pm on Thursday, November 22. It was the same show that reported about the Chinese Coast Guard confiscating the catch of Filipino fishermen in Panatag.

“But this is within the exclusive economic zone of the Philippines,” Veneracion told the Chinese crew member.

Veneracion sensed that “the conversation was going nowhere,” so he asked the Chinese Coast Guard member to give him and his crew 30 minutes “to pack up.”

The Chinese Coast Guard member added, “If you don’t leave here, we will make a forced matter.”

Veneracion shot back, “You need not warn us, Sir.”

The journalist recalled that the Chinese Coast Guard crew “didn’t leave the area until we were miles away from Panatag Shoal.”

Rappler is still trying to reach the Chinese embassy for comment as of posting time.

This encounter happened around two weeks before the trip of Chinese President Xi Jinping to the Philippines from Tuesday to Wednesday, November 20 to 21.

In the joint statement after Xi’s visit, the Philippines and China said they “agree to exercise self-restraint in the conduct of activities in the South China Sea that would complicate or escalate disputes and affect peace and stability.”

The Philippines in July 2016 won a historic case against China at a Hague tribunal, which upheld the Philippines’ rights over the West Philippine Sea. But Philippine President Rodrigo Duterte chose to set aside this ruling to gain loans and grants from Beijing.

Former Philippine foreign secretary Alan Peter Cayetano denied, however, that the Philippines has not used the 2016 arbitral award. He claimed that Filipino fishermen can now fish in Panatag Shoal, and can now enter the lagoon of Panatag Shoal especially in times of bad weather.