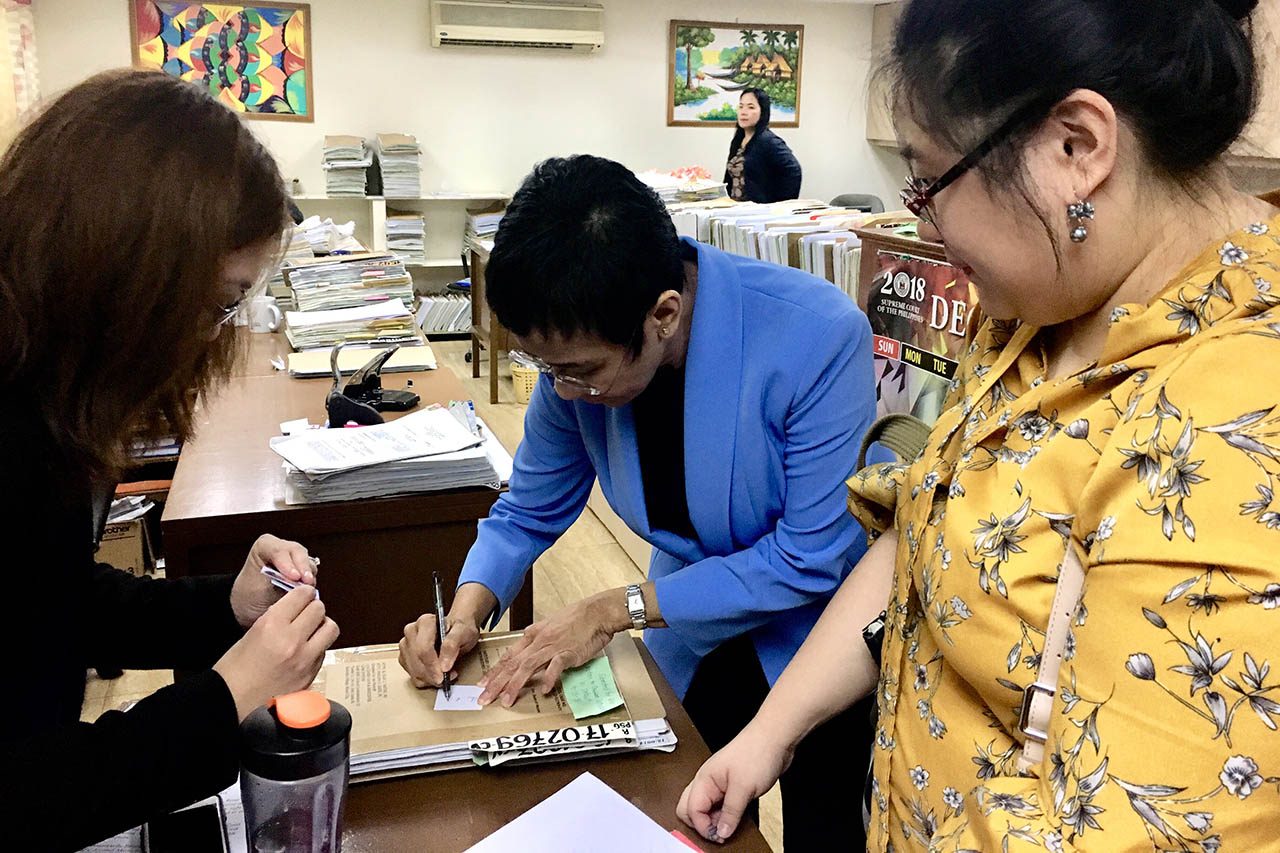 Ressa posted a bail of P60,000 after the court found probable cause that RHC (the holding company of Rappler Inc) supposedly failed to supply correct information in its Value Added Tax (VAT) return for the 2nd quarter of tax year 2015. The court said this is in violation of Section 255 of the Tax Code.

Ressa posted bail without waiving her right to question the jurisdiction of the Pasig court over this case.

In a statement released Monday afternoon, Ressa said, “We verified that an arrest warrant had been issued on the basis of what we believe are politically-motivated charges. I surrendered to the court this morning, went through the process of what a criminal would go through, and filed bail without surrendering my right to question the Pasig court’s jurisdiction over this tax case. This is a clear case of harassment.”

The case at the Pasig court – filed on November 14 – is just one of the 5 tax cases the Department of Justice has filed against RHC and Ressa, who received two major awards from international organizations in November.

These were the 2018 Knight International Journalism Award given in Washington, DC, for Rappler’s innovation and exposés on corruption despite the obstacles thrown its way, and the Gwen Ifill Press Freedom Award, which the New York-based Committee to Protect Journalists (CPJ) gives “to an individual who has shown extraordinary and sustained achievement in the cause of press freedom.”

The charge stemmed from RHC’s issuance of Philippine Depositary Receipts (PDRs), a mechanism that allows Filipino companies, including other media networks, to have foreign investments. Rappler Holdings issued PDRs in 2015 to foreign investor Omidyar Network Fund and NBM {North Base Media] Rappler, L.P.

In January 2018, the Securities and Exchange Commission (SEC) ordered the revocation of Rappler’s license. The Court of Appeals, however, did not uphold the ruling, saying Omidyar’s donation of the PDRs to Rappler’s managers cured the issue. The CA then remanded the case to the SEC for review. (READ: DOCUMENT: Court of Appeals’ full decision on Rappler’s SEC case)

The Pasig RTC case cites the alleged failure of Ressa to report the “total quarterly sales receipts coming from the issue and sale by RHC of…PDRs, as a dealer in securities, to NBM Rappler L.P…”

After posting bail, Pasig Judge Danilo Buemio signed her release order. Her arraignment was set for December 7 at 8:30 in the morning.

Pattern. Aside from the 5 tax cases, the DOJ is also investigating Ressa for cyber libel and alleged violation of the anti-dummy law. Earlier, after receiving the CPJ press freedom award, Ressa said, “We continue to tell the story of the nation. These cases will not intimidate nor distract us from holding public officials to account through our stories.” (WATCH: Maria Ressa receives International Press Freedom Award)

Rappler has been subject to harassment and intimidation by the Duterte administration. President Rodrigo Duterte himself had made repeated false allegations against Rappler, including being supposedly funded by the US Central Intelligence Agency (CIA).

Its reporters and correspondents have also been barred from covering all presidential events in and out of the country. – Rappler.com