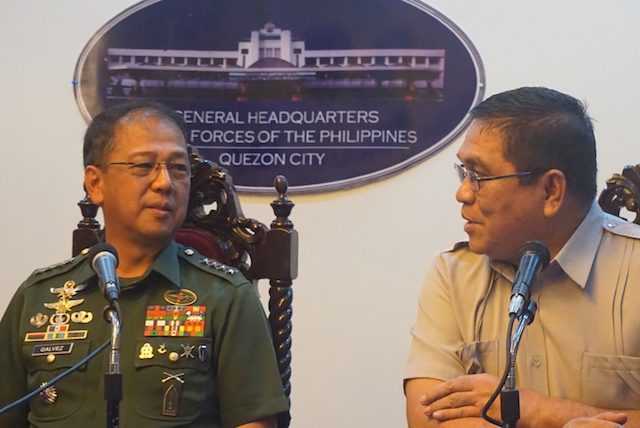 MANILA, Philippines (UPDATED) – Military chief General Carlito Galvez Jr  will be the next chief peace adviser after he retires next week, Malacañang announced on Wednesday, December 5.

Presidential Spokesman Salvador Panelo said in a Palace news briefing that President Rodrigo Duterte bared this during the Cabinet meeting on Tuesday, December 4.

“The President announced his intention to appoint General Carlito Galvez, Jr to the Office of the Presidential Adviser on the Peace Process,” Panelo said.

When asked to clarify what particular position Galvez would hold in the OPAPP, Panelo it would be as presidential peace adviser.

Last month, Galvez expressed his desire to serve as an OPAPP consultant after he retires from the military service on December 12. He said in a November 19 news briefing that he had conveyed this to then chief peace adviser Jesus Dureza who accepted his request.

OPAPP is currently without a chief as Dureza resigned as presidential peace adviser on November 27, after the President sacked an OPAPP Undersecretary Ronald Flores and Assistant Secretary Yeshtern Donn Baccay for alleged corruption.

After the CCCH, Galvez rose from the ranks to lead the 6th Infantry Division in Maguindanao, the Western Mindanao Command in Zamboanga City, and eventually the entire AFP.

Once appointed, Galvez will join the growing number of former military men in the Duterte administration. – With reports from Pia Ranada/Rappler.com