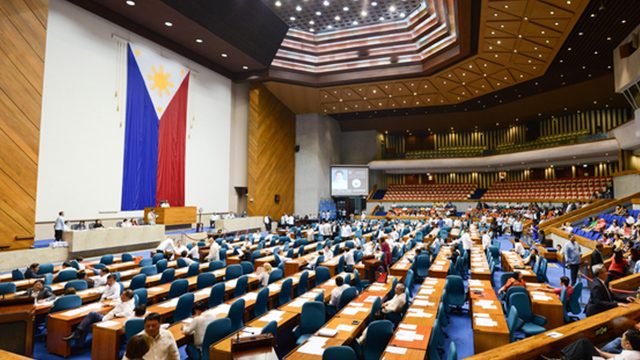 Facebook Twitter Copy URL
Copied
But the draft federal charter's chances of getting signed into law remain bleak, with senators earlier saying it would be 'dead on arrival' at the Senate

MANILA, Philippines – The House of Representatives approved on 3rd and final reading the resolution that seeks to shift the Philippines to a federal system of government.

Legislators voted 224-22-3 in favor of Resolution of Both Houses (RBH) 15 on Tuesday, December 11, a week after the House approved the resolution on 2nd reading. (READ: LIST: Major constitutional changes the House wants under federalism)

The House was able to meet the requirement that three-fourths out of the total 292 lawmakers must vote in favor of RBH 15 for it to be passed.

Authored by no less than Speaker Gloria Macapagal Arroyo and 35 other legislators, RBH 15’s passage at the lower chamber was swift. The House dedicated only 3 session days for plenary debates.

Unlike the draft constitution drafted by the Consultative Committee, RBH 15 would not impose a specific number of federal states to be established. A federal state may instead be created upon a petition addressed to Congress by contiguous, compact, and adjacent provinces, highly urbanized and component cities, and cities and municipalities in metropolitan areas through a “resolution of their respective bodies.” (READ: Highlights of the House’s draft federal constitution)

The resolution must be approved by a majority of the votes cast in a plebiscite to be held in the political units affected. It would be up to Congress, however, to draft the organic law that would create the federal state concerned.

The Bangsamoro Autonomous Region would also be recognized as a federal state.

RBH 15 has been drawing flak for its controversial provisions. The House removed the anti-political dynasty provision in the 1987 Constitution and also lifted the two term-limit for senators and the 3-term limit for district and party-list representatives.

RBH 15 would also revive the two-party system, with the first two “dominant” parties garnering the most number of votes during the first national elections under federalism becoming the official parties.

The president and vice president, meanwhile, must come from the same party and shall be elected as a team, with each of them serving a term of 4 years. They will both be eligible for one reelection.

RBH 15 also removed the line in the current Constitution that limits the participation of foreign investors in the governing body of entities based on their proportionate share in the capital.

If passed, RBH 15 would set the first national and local elections for the new president, vice president, senators, representatives, and local officials on the second Monday of May 2022. Winners would assume office at 12 pm on June 30, 2022.

President Rodrigo Duterte would not be allowed to run for reelection in 2022.

Candidates for president, vice president, and Congress members would also be required to have a college degree.

Arroyo has already conceded RBH 15 will not be passed during the 17th Congress, but she still hopes to “bring it as far as we can bring it” in the House.

Ranking senators already said RBH 15 will be “dead on arrival” at the Senate. – Rappler.com