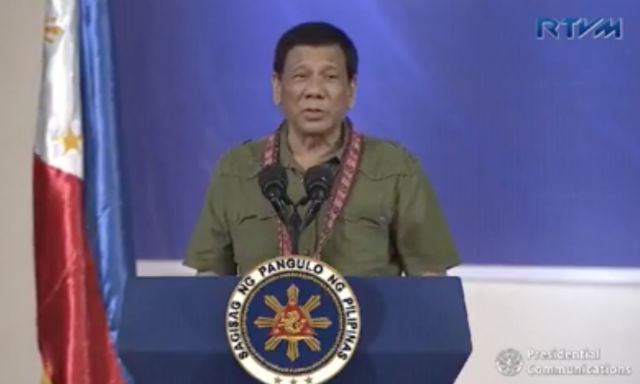 In a speech in Kidapawan City, Cotabato, the President attacked the doctrine of God the Father, God the Son, and God the Holy Spirit as he once again went into a tirade against priests and the Catholic Church.

Before attacking the Holy Trinity doctrine, Duterte said Jesus Christ is “unimpressive” because he had allowed himself to be nailed on the cross.

(Your God was nailed on the cross. Fuck. How unimpressive. I’m God and you will crucify me? Motherfucker. I’d tell them, ‘Lightning, finish all of them. Burn all the non-believers.’)

The passion, death, and resurrection of Jesus Christ is among the central doctrines of Christian faith, with Christians believing that Jesus sacrificed himself to save the world from sin. (READ: Do we save Jesus or another king? – Tagle)

The President likewise belittled the belief in saints, whom he previously called as “fools” and “drunkards.”

(Saint Catalina, Saint Anne, Saint Thomas, Saint Sebastian, Saint Rodrigo, they’re nothing… I don’t know them. Look, those documents were written – if at all – 3,000 years ago. Why would  they care about our lives now?)

(Who wrote about them? Who’s Saint Thomas? We don’t know who they are. That might even be a name for a cow or camel then.)

The President – under whose term a string of priests have been murdered – had previously stirred controversy for calling God “stupid.”

On December 6, Duterte even joked that bishops should be “killed” for supposedly doing nothing but criticizing his administration, which is waging a bloody war against drugs that has killed thousands. – Rappler.com