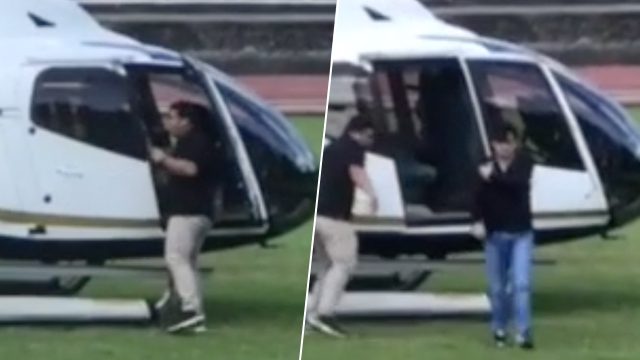 MANILA, Philippines – As far as Malacañang is concerned, Presidential Assistant for the Visayas Michael Dino is not to blame for his chopper landing at the Ultra Philippine Sports Complex. It was done without permission from authorities and disturbed a youth sports event.

Presidential Spokesperson Salvador Panelo said it’s the pilot’s fault and not Dino’s as the presidential assistant was merely a passenger who supposedly had no say about the circumstances of the landing.

“It’s the fault of the pilot, not the passenger,” he said on Thursday, January 10, during a Palace news briefing.

Earlier that day, Rappler reported that Dino’s chopper landed in the middle of a race track inside Ultra even without getting clearance from officials of the sports complex. Philippine Sports Commission Chairman Butch Ramirez even said the chopper landing was “inappropriate” since it endangered the lives of the youth athletes, coaches, and parents at the sports event.

But for Panelo, only the pilot had the responsibility to obtain clearance from Ultra officials, not Dino.

“The pilot should have known that you’re supposed to have clearance. Ask permission first before going there. You should know it’s clear. The pilot was wrong there,” said Panelo in Filipino.

Asked if Dino should take some of the responsibility for the incident, Panelo said, “Ano ang kasalanan ng pasahero, pasahero lang ‘yun (What’s the fault of the passenger, when he’s just a passenger)?”

Panelo likened Dino to an airplane passenger who has no control over where and how the plane’s pilot lands.

But was Dino totally clueless about the plan to land in Ultra? His own chief of staff, Jonji Gonzales, had said Dino was there to pick up persons en route to an event in Batangas City. This means that, at the very least, Dino knew that the chopper would be landing in Ultra.

The pilot, who was operating what appears to be a private chopper, also would have taken orders on where to land and pick up passengers from someone higher up, specifically from whoever rented the chopper in the first place.

Dino, as the VIP passenger of the chopper, would have known about such orders, if he didn’t give them himself. – Rappler.com