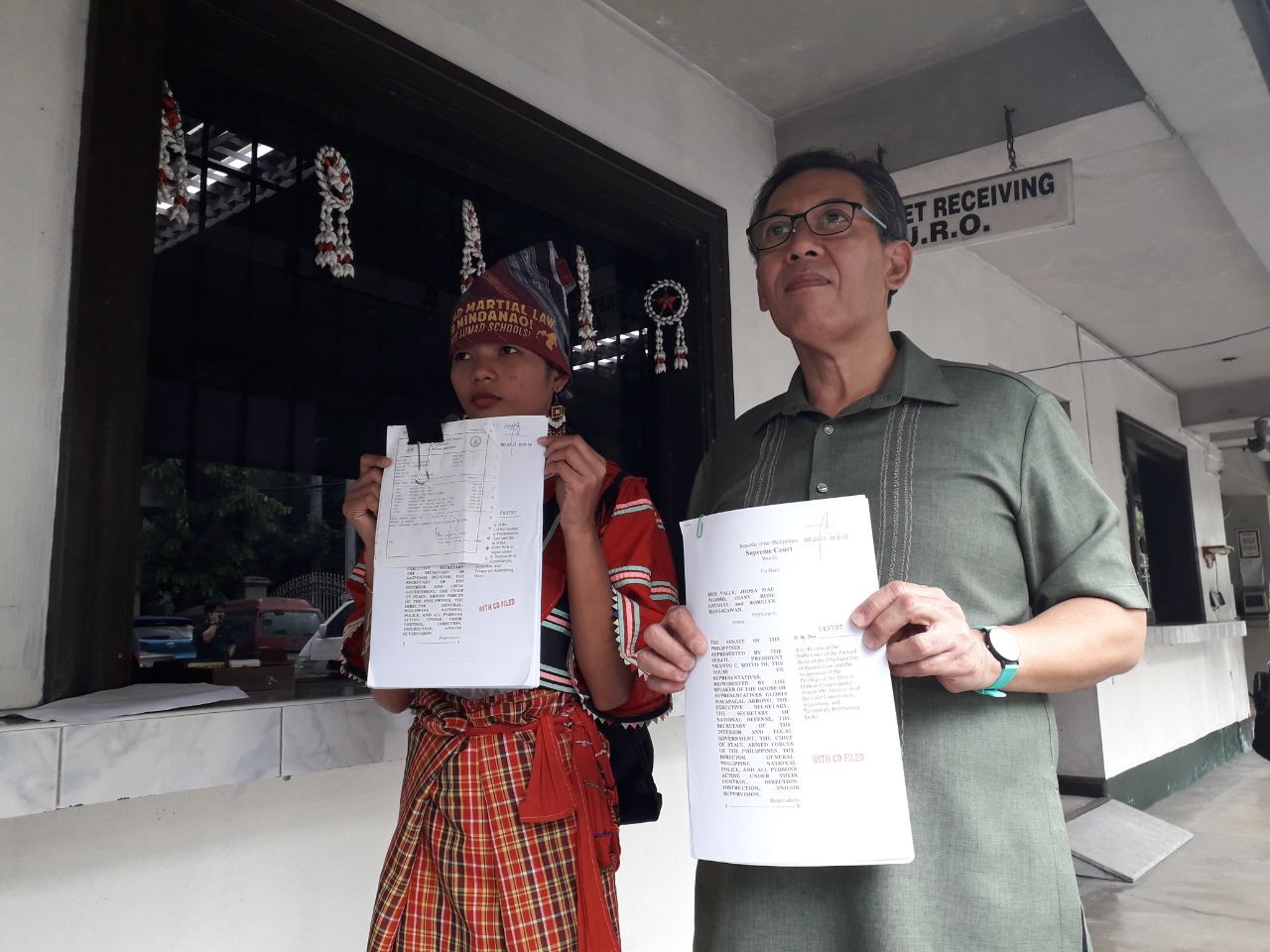 MANILA, Philippines – A group from Mindanao on Wednesday, January 23, filed the latest petition against the third extension of martial law in Mindanao.

The petitioners included Jeany Rose Hayahay, a young volunteer teacher in a Lumad school in Compostela Valley, who claimed that she was the real subject of the military’s alleged abduction of her mother last year.

On October 16, 2018, Hayahay received a call that her mother Imelda had been abducted by 7 masked armed men. Hayahay and her mother, who was released after 18 days, claimed that members of the Army’s 71st Infantry Battallion were behind the abduction.

Hayahay said at the Supreme Court (SC) grounds on Wednesday that she was the real target of the alleged military abductors, who held her mother to intimidate her into owning up to being a communist rebel and to surrender to the government.

Hayahay called this “fake surrender” which, she claimed, had been going on in their tribe for a long time. She said it worsened under President Rodrigo Duterte’s martial law in Mindanao, which was supposed to have lapsed on December 31, 2018, but had been extended a third time to the end of 2019.

Hayahay and fellow Lumad teachers Rius Valle and Jhosa Mae Palomo, and student Rorelyn Mandacawan filed on Wednesday a petition before the High Court asking it to stop the Congress-approved martial law extension.

(Armed forces’ encampment should be 500 meters away from the community but ever since martial law was declared, they have camped out in our community, threatening and harassing our schools and forcing them to shut down.)

Reports of burning down schools and other alleged harassment of military agents are documented in their petition prepared by the Free Legal Assistance Group (FLAG) led by its chairman, senatorial candidate Chel Diokno.

(They are the true faces of martial law. They are the one being harassed, evicted from their communities because of military rule, and they’re not being given attention by both the government and even the press.)

What makes this petition different? Hayahay’s group is the fourth to file a petition against the martial law extension, but the first to come from Mindanao.

The 3 earlier petitions against the third martial law extension had been consolidated and scheduled for oral arguments on January 29.

“We hope to join the oral arguments,” Diokno said, as their petition also asked that they be consolidated with the other 3 groups.

The petition also asked the High Court to issue a cease and desist order against the military.

“It is also further prayed that a Temporary Restraining Order be issued directing the Armed Forces of the Philippines (AFP), the Philippine National Police (PNP), and any paramilitary component of the AFP to cease and desist from continuing with its militarization of areas where Lumad schools are located, the forcible closure of Lumad schools, and the harassment of teachers and students,” the petition said. 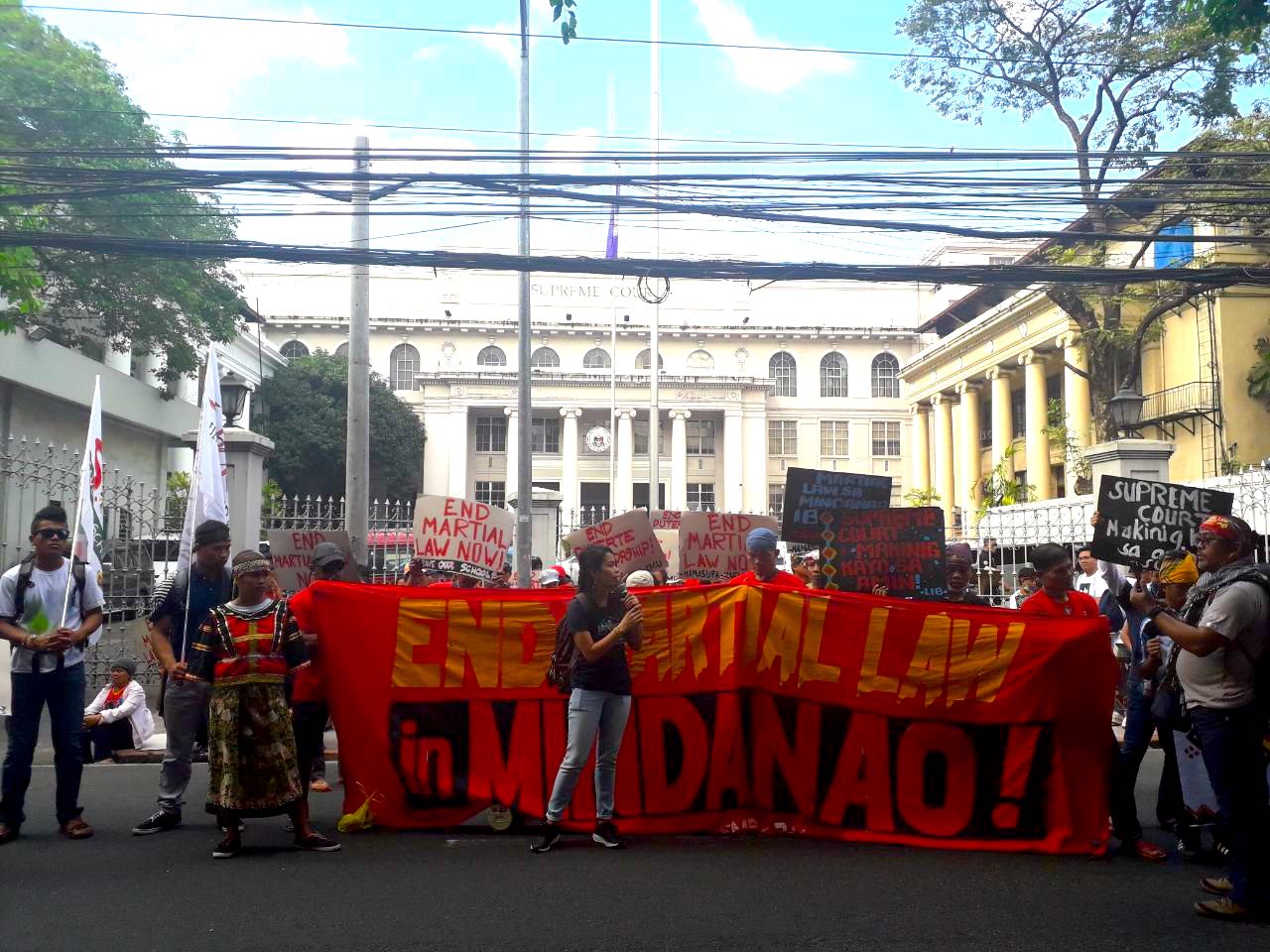 What are the legal issues? The SC sided with the Duterte administration when the legality of  martial law in Mindanao was questioned following its declaration on May 23, 2017, and again when the first two Congress-granted extensions were the subject of similar petitions.

Duterte himself declared Marawi liberated from terrorist influence as early as October 2017, but sought the extension of martial extension in the region – which would last more than half of his term in December 2019 – citing terrorist attacks.

What the latest petition seeks to prove is that the imposition of martial law had led to an escalation of human rights violations by the military, which the government had repeatedly denied in its pleadings, citing lack of proof.

Solicitor General Jose Calida had also argued that allegations of human rights abuses should be tackled in separate proceedings, saying that the High Court was not a trier of facts.

He was referring to Section 18, Article VII of the Constitution which states: “The Supreme Court may review, in an appropriate proceeding filed by any citizen, the sufficiency of the factual basis of the proclamation of martial law or the suspension of the privilege of the writ or the extension thereof, and must promulgate its decision thereon within thirty days from its filing.”

Unique to this petition also is that the Lumad have long been accused of either coddling or recruiting communist rebels. It’s a persistent problem that have resulted in deaths and the displacement of tribe members.

Duterte’s justification for the third extension includes the communist insurgency.

The latest petition addresses this, saying that “the wholesale extension of martial law and suspension of the privilege of the writ of habeas corpus have resulted in an environment of continued impunity directed against Lumad schools which have been harassed, intimidated and red-tagged.”