Is that pork? Senators say don’t compare their realigned P190B to House’s P51B

Jan 28, 2019 3:19 PM PHT
Mara Cepeda
Facebook Twitter Copy URL
Copied
Senator Loren Legarda admits they are seeking to realign almost P190 billion under the 2019 budget, but only because government agencies asked them to 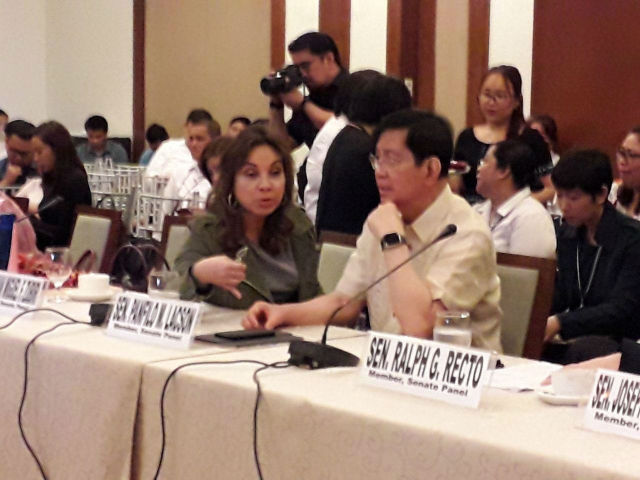 On Monday, January 28, senators Loren Legarda and Panfilo Lacson denied the P190 billion is a form of the now-unconstitutional Priority Development Asisstance Fund or pork barrel for senators.

Legarda and Lacson were responding to Andaya, who raised during the bicameral conference committee hearing on the 2019 budget the difference between the proposed realignments of the House and the Senate. Andaya said the House is proposing to realign around P51 billion, while the Senate’s total is at P190 billion.

The congressman did not mention the word “pork,” but Legarda herself, the chairperson of the Senate committee on finance, brought up the term as she defended the P190-billion realignment.

Legarda clarified that the exact amount was P189.2 billion, but she hoped it would “not be misconstrued as my individual amendments.”

She said senators only proposed to realign this money because different government agencies – not just the Department of Public Works and Highways – were asking them to give more funds to certain projects.

Legarda explained that as long as these projects were justified, she didn’t see anything wrong with funding them.

“Honestly, I don’t consider that pork. Senator Lacson and I discussed that. As long as there is an institutional agency request, it has been vetted by regional development councils – even the request from the barangay, from the LGU (local government unit), from the province, and has been lying there for years, if not decades,” said Legarda.

What is in this P190 billion? Legarda said P68 billion of this money are unprogrammed appropriations, which the Department of Budget and Management defines as “those which provide standby authority to incur additional agency obligations for priority programs or projects when revenue collection exceed targets, and when additional grants or foreign funds are generated.”

She said the P190 billion also includes the proposed P800 million for the celebration of World Teachers’ Day every October and P7.5 billion for the Philippines’ hosting of the 2019 Southeast Asian Games, among other proposed budget increases by several departments.

Legarda then said another P50 billion of the P189.2 billion represents “amendments from the vice chair,” referring to Lacson.

Lacson had previously accused the House of passing a pork-riddled 2019 budget, sparking the string of controversies now hounding the proposed annual national budget. (READ: What to expect as gov’t operates on a reenacted budget)

Andaya had admitted that each congressman is getting P60 million to fund their pet projects, while senators supposedly got P200 million each.

The national government is operating on a reenacted budget – or the same appropriations as in 2018 – because of Congress’ failure to pass the proposed budget for 2019.

So what should this P190 billion be called? If it were up to Legarda and Lacson, these are “institutional amendments” – budget realignments that were initiated because the departments concerned asked lawmakers to do so.

Lacson said an example of an institutional amendment that he “included and was adopted by the Senate” was a P4-billion fund requested by the Armed Forces of the Philippines and the Department of National Defense to activate an infantry division.

He then told the bicam that they should “set aside” discussions of these institutional amendments as doing so would be “unfair.”

“We should set aside institutional amendments because that’s unfair. Those amendments were initiated upon request by the agencies themselves,” said Lacson.

Instead, he proposed that the bicam agrees on a “pie” or a maximum amount of realignments that Congress will be making as a whole, and make the necessary adjustments guided by this amount.

The bicam later agreed to set the realignment pie to P50 billion for now.

As of posting time, the House and Senate contingents are meeting separately to adjust their respective proposals. The bicam will meet again at 6 pm on Monday to finalize the amount to be realigned under the 2019 budget. – Rappler.com