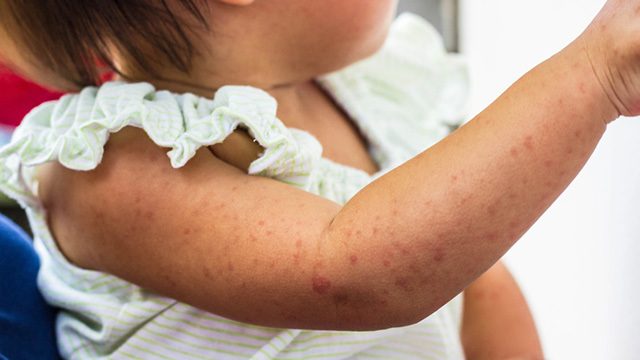 Facebook Twitter Copy URL
Copied
(UPDATED) The DOH Epidemiology Bureau reports that from January 1 to 19, the number of measles cases in NCR has reached 196 – much higher than the 20 cases recorded during the same period in 2018

“We are declaring an outbreak as cases have increased in the past weeks and to strengthen surveillance of new cases and alert mothers and caregivers to be more vigilant,” Health Secretary Francisco Duque III said in a statement.

Health Undersecretary Eric Domingo earlier confirmed to Rappler that they declared a measles outbreak in the region on Wednesday.

Data from the DOH Epidemiology Bureau showed that from January 1 to 19, the number of measles cases in NCR has reached 196 – much higher than the 20 cases recorded during the same period in 2018.

Aside from the confirmed cases in January, Domingo said they recorded 861 suspected measles cases in Metro Manila from January 1 to February 2.

According to DOH, these regions need to scale up their response against measles and vaccinate all unvaccinated children against the disease.

Measles is a viral, highly-contagious respiratory disease. Infected persons exhibit symptoms such as high fever, red eyes, runny nose, and cough. Rashes appear throughout the body and last for days.

Duque said immunization and Vitamin A supplementation of 9-month-old children are the best defenses against measles.

The DOH urged the public to bring all suspected measles cases to the nearest health facility for early treatment and proper case management. – with a report from Sofia Tomacruz/Rappler.com