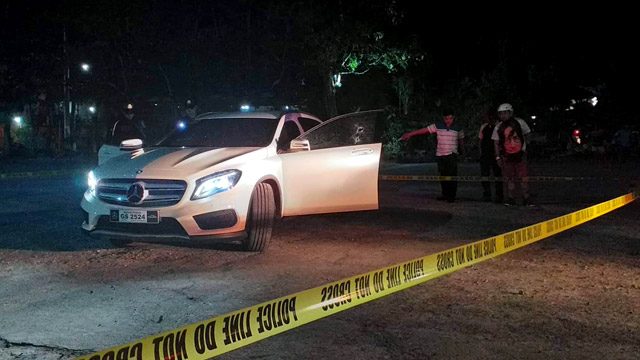 BACOLOD CITY, Philippines (UPDATED) – A businessman was killed while his wife was injured after they were shot by still unidentified assailants riding a motorcycle at the premises of Our Lady of Perpetual Help Shrine (Redemptorist Church) here Tuesday night, February 19.

Filipino-Chinese businessman Alex Yao, 54, and his wife Ma Teresa were about to leave the church after attending a prayer meeting when they were gunned down by the suspects.

The couple was already on board their white Mercedes Benz when one of the suspects approached them at the parking lot and opened fire.

The husband sustained 3 gunshot wounds while his wife was also hit.

They were brought to the hospital where the husband died.

Pico said the suspects targeted the husband and may have monitored his activities.

The police have yet to establish a motive of the incident.

Based on the initial investigation, witnesses saw the two suspects wearing black jackets at the church parking lot before the shooting.

Recovered from the scene were several spent .45 caliber bullets

The police were still conducting an investigation.

Last Sunday, February 17, a businessman was also killed in an ambush along EDSA in Mandaluyong.  Jose Yulo was riding a white Toyota van along EDSA Reliance Sunday afternoon when he was ambushed by motorcycle riding gunmen. Yulo and the driver of the van, Allan Santos, were killed in the incident. – Rappler.com