Feb 21, 2019 8:57 PM PHT
Sofia Tomacruz
Facebook Twitter Copy URL
Copied
The De La Salle University makes its debut in the Times Higher Education Asia Pacific University Rankings, while the University of the Philippines climbs in rank and is now in the 101-110 bracket 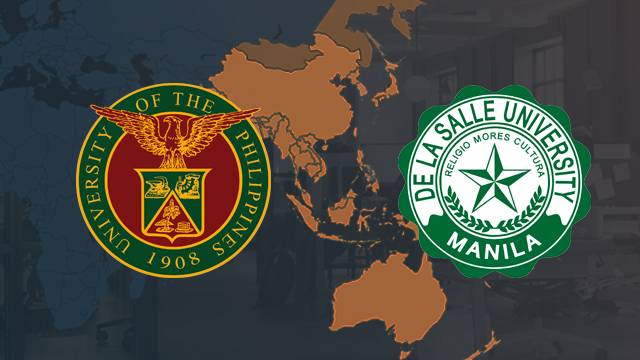 The latest rankings released Wednesday, February 20, showed that UP also climbed higher in the rankings, as it is now in the 101-110 bracket. The univeristy was in the 151-160 bracket in 2017.

The DLSU, meanwhile, made it to the list for the first time, joining the 201-250 bracket.

In 2018, both UP and DLSU were also the only Philippine universities that appeared on the THE World University Rankings. At the time, it was also the first time for DLSU to feature on the list of top universities worldwide. (READ: DLSU joins U.P. in latest world university rankings)

The THE Asia Pacific University Rankings based its scores on the same indicators used in its world rankings. These include 13 performance indicators that cover teaching at 30%, research at 30%, citations at 30%, international outlook at 7.5%, and “knowledge transfer” or industry income at 2.5%. Universities are scored on a scale of 100 according to these parameters.

For the Asia Pacific rankings though, the group said it adjusted some weightings “to reflect the younger profile of some of the universities in the region.”

Meanwhile the top 10 universities in Asia Pacific according to the Times Higher Education are the following:

Over 300 universities were included in the list. The group reviewed universities across East Asia, Southeast Asia, and Oceania. – Rappler.com