Feb 23, 2019 1:50 PM PHT
Rappler.com
Facebook Twitter Copy URL
Copied
'Dozens of individuals have been targeted for extrajudicial or summary killing in the Philippines after they were labeled as communist,' says Human Rights Watch 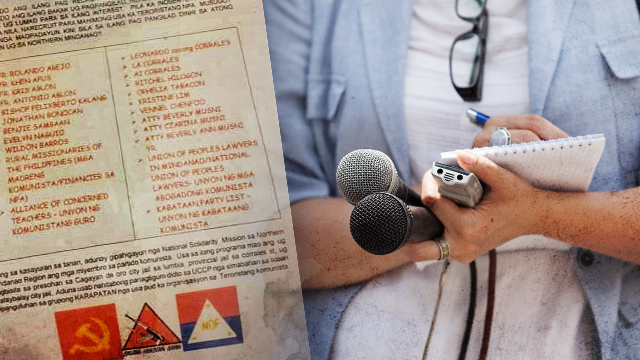 MANILA, Philippines – Human Rights Watch (HRW) on Saturday, February 23, expressed “deep concern” over the red-tagging of a journalist and other individuals and groups in Cagayan de Oro City.

“We view with deep concern the ‘red-tagging’ done on Cagayan de Oro journalist Cong Corrales, his son, and his wife, along with several other local activists and human-rights defenders,” HRW Philippines Researcher Carlos Conde said in a statement.

“There is no other way to describe the list but as a threat against the lives of those on it. Dozens of individuals have been targeted for extrajudicial or summary killing in the Philippines after they were labeled as communist,” HRW added.

HRW said that while such violence had happened before the Duterte administration, “the impunity for killings – whether drug-related or political – in the present government has made this type of threat even more worrisome.”

“The government, particularly the military and law enforcers, should back off Corrales and his family and the other ‘red-tagged’ individuals,” it said.

During a human rights forum on Cagayan de Oro City on Friday, February 22, an unknown person gave a document to journalists that listed red-tagged individuals and groups in the city.

Human rights groups and journalists have slammed the document, saying it imperiled those on the list. – Rappler.com