Feb 26, 2019 1:17 PM PHT
Lian Buan
Facebook Twitter Copy URL
Copied
Te says the Supreme Court finalized the Cybercrime Law only on April 22, 2014, which means that in February 2014 when the article was supposedly republished, there was no applicable law 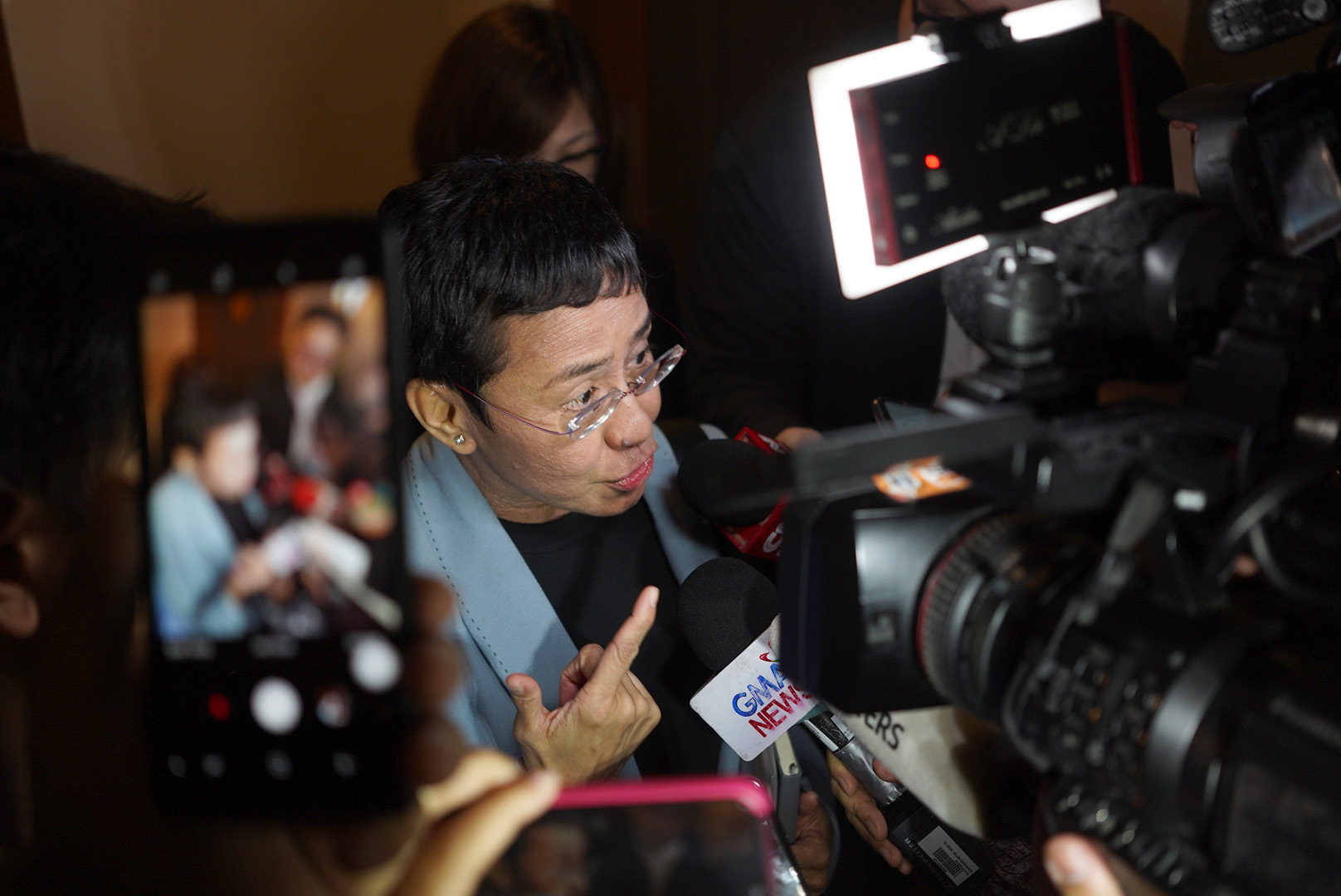 Te, who is now handling the cyber libel case, will take on the Department of Justice (DOJ) in its charge against the news company. (READ: FAQs: What you need to know about Rappler’s cyber libel case)

The article in question, written by Santos, was published in May 2012 or 4 months before the cybercrime law was enacted in September 2012. However, because of a typographical error (“evasion” was misspelled as “evation”), a correction was made on February 19, 2014. The updated article in 2014, according to the DOJ, is covered by the republication rule – meaning, the cybercrime law had already taken effect and was applicable.

Temporary Restraining Order. The SC, however, issued a Temporary Restraining Order (TRO) against the law on October 9, 2012, and held oral arguments. The SC came out with a decision on February 11, 2014, or 8 days before the supposed republication, but motions for reconsidertion were filed, which the High Court resolved with finality only on April 22, 2014, Te pointed out.

“During the duration of this TRO – October 9, 2012 continuously until April 22, 2014 – there was effectively no RA 10175. That is the legal, practical, and actual effect of the Supreme Court’s TRO. The alleged republication was done on February 19, 2014, when the TRO was still in effect,” said the motion.

Republication rule. In its charge sheet, the DOJ highlights the word “republish” in order to apply the Cybercrime Law which the justice department assumed to have been in effect on February 19, 2014, the supposed republication date.

The DOJ used an SC decision from 1988 where the High Court had to rule which lower court has jurisdiction over a newspaper article, and in so doing, adopted the multiple publication rule.

Te, however, noted that the said decision came from the SC Third Division and not the en banc.

“It is a Third Division decision that binds only the parties thereto. It is canonical that only decisions of the Supreme Court En Banc are vested with authoritativeness or precedential character,” the motion said. 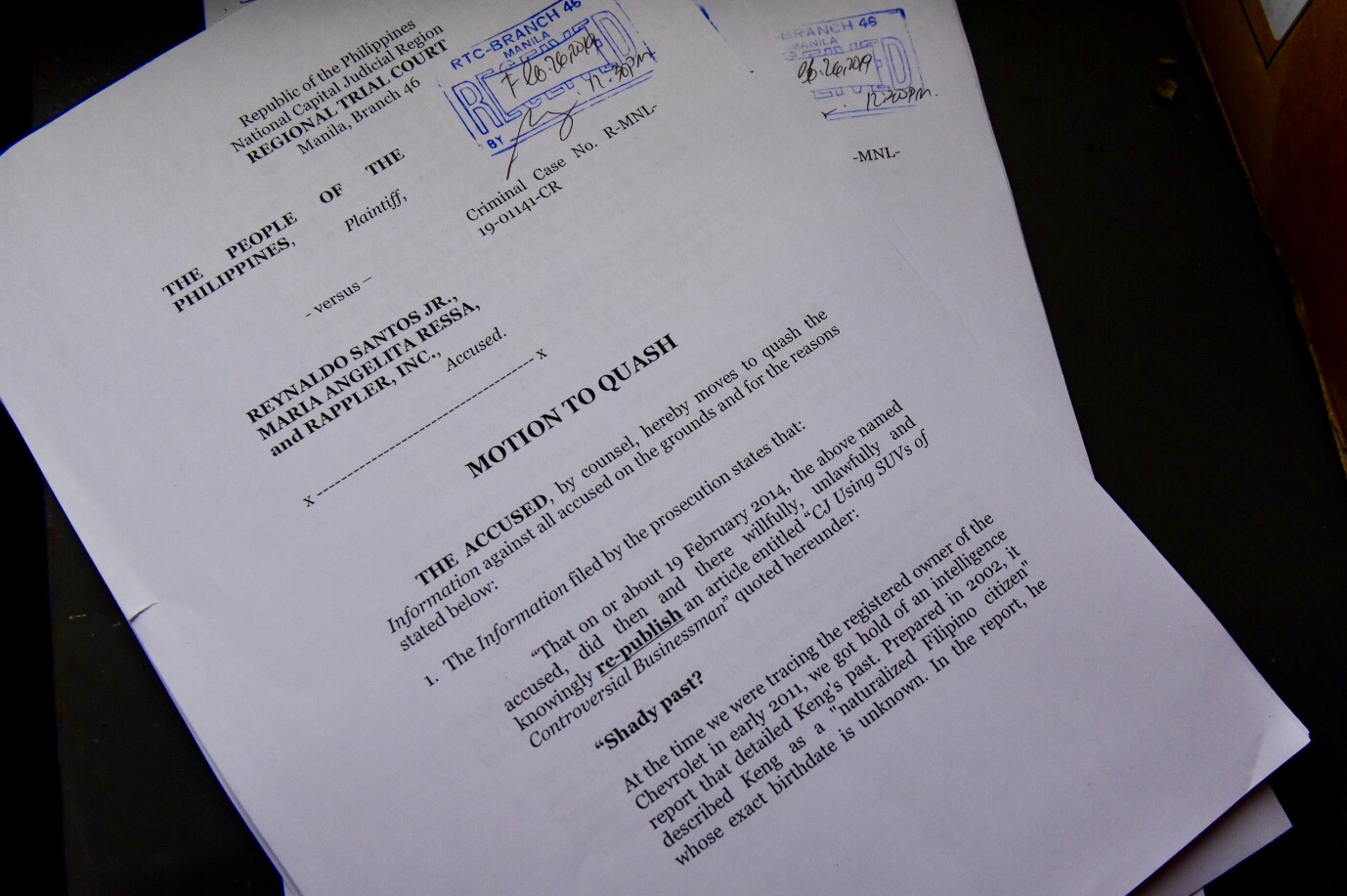 The motion also argued that the Supreme Court actually struck out as unconstitutional the part of the Cybercrime Law that punishes “aiding and abetting” in a case of cyber libel. The en banc struck it out for infringing too much on the freedom of speech.

The motion argued that the act of sharing on the internet and the act of republishing are similar in some ways.

“This is a repudiation of the ‘multiple republication’ principle for online media and cyber libel because otherwise each act of ‘sharing’ a defamatory statement would then constitute a separate and distinct act of libel, a proposition which the Court rejected by its striking down of section 5 of RA 10175,”  the motion said.

The motion also argued that the typographical corrections did not constitute republication, based on several decisions from the United States, one of which said “to treat the changes as republications would be inappropriate and defeat the beneficial purposes of the single publication rule.”

In Atkinson v. McLaughlin, for example, the District Court of North Dakota employed the “test of substantial modification“ in the context of republication. Quoting from the ruling, the motion said: “However, even under the single publication rule, the courts have recognized that a website may be republished and create a new cause of action for defamation if the website is substantially modified. Republication triggers the start of a new statute of limitations and occurs upon a separate aggregate publication from the original, on a different occasion, which is not merely a delayed circulation of the original edition…”

“In the absence of controlling Philippine jurisprudence, American case law is persuasive and provides guidance for this court in addressing this specific issue of first impression,” said the motion.

Charging Rappler as a company

The DOJ did not only charge Ressa and Santos, it also charged Rappler as a company.

The motion said that Section 9 of the Cybercrime Law laid down rules for a corporation to be held liable, such as when the crime was committed by a natural person for the benefit of the juridical person or the company.

“The instant Information may be scoured at length for any of the relevant elements of liability for a corporate entity under section 9 and none will be found,” the motion said.

The DOJ dismissed complaints against other editors and directors of Rappler and proceeded to charge only Ressa, who was not involved in the editing or handling of Santos’ article.

“The dismissal of the complaint as against all corporate officers, except accused Ressa, is telling,” said the motion.

Ressa and Santos are scheduled to be arraigned on March 1.

In charging Rappler, the DOJ’s interpretation of the cybercrime law has now made it possible for online publications to be sued within 12 years of a story’s publication. The ordinary libel charge under the Revised Penal Code prescribes in one year and not 12.

Rappler has always argued that the prescription for cyber libel should still be one year, because the cybercrime law only increased the penalty of cyber libel, with the Supreme Court saying in its decision that “cyber libel is not a new crme.”

“Indeed, cyber libel is actually not a new crime since Article 353, in relation to Article 355 of the penal code, already punishes it. In effect, Section 4 (c) (4) above merely affirms that online defamation constitutes ‘similar means’ for ‘committing libel,’” said the motion. – Rappler.com